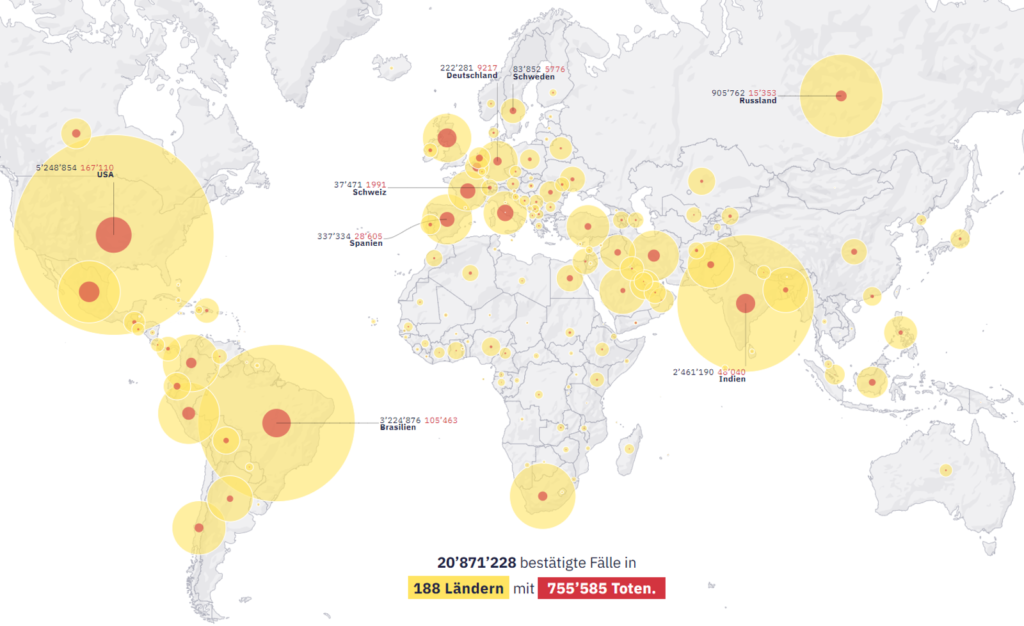 The fact that the current hysteria in many states traditionally referred to as “Western Free Democracies” has led to absurd behaviour of masses of people wearing facial masks that would hardly protect even against bacteria but definitely doesn’t against any viruses makes one wonder why on the most populous and economically most embattled continent Covid-19 doesn’t really play a role at all.

Only 5 percent of the 20 million cases worldwide were recorded in Africa: Overview of corona infections (yellow) and deaths (red).
Rising poverty, overcrowded metropolises, comparatively few doctors and hospitals: The conditions for Africa were extremely unfavorable at the beginning of the Corona crisis.

The continent must “prepare for the worst,” warned WHO chief Ghebreyesus in March. Numerous epidemiologists feared that Africa could become an epicenter of the pandemic. And Bill Gates predicted more than 10 million deaths if not acted quickly.

But the gloomy prophecies have not come true to this day – exactly six months to the day after the first official fall on the continent. Africa only has a good 1 million infections and 24,000 victims. That is three times fewer cases than in Europe and eight times fewer deaths.

If you put the numbers in relation to the population, the difference between Africa and Europe and especially North America is even greater.

While new infections rose exponentially there in March, the virus was hardly an issue in Africa. Here, too, the number of cases increased continuously, but much more slowly and also at a significantly lower level.

Only when the 55 countries on the continent recorded a cumulative total of more than 100,000 confirmed new infections per week in July did the WHO speak of a “worrying acceleration”. It seemed like Africa was just beginning a real pandemic outbreak. But since then the curve has flattened again.

Is Africa actually largely spared from the coronavirus? And if so, why? Experts around the world are currently discussing these questions. You have different explanations.

The most obvious thing to do is to question the reliability of the official corona statistics. These could be sketchy, maybe even coiffed. In addition, little was tested in many places.

Only a few countries such as Botswana, Ghana and South Africa have a test rate that is comparable to Europe. And it is precisely in South Africa, which has carried out the most tests, the number of confirmed infections is by far the highest.

In many countries there is likely to be a discrepancy between the confirmed cases and the actual number of people infected. However, a high number of unreported cases is also suspected in Europe and elsewhere.

And otherwise, the explanation that the phenomenon can be traced back to incorrect data alone falls short in the eyes of many health experts.

An international team of African and European researchers identified other possible reasons that they recently published in the prestigious science magazine Science.

Accordingly, many African countries introduced measures such as border and school closings, travel restrictions, curfews and distance requirements and started tests very early on – often at a time when they officially had no corona cases.

Experience also played a role here: the continent knows from other epidemics such as Ebola how infectious diseases must be combated effectively.

People are more used to corresponding controls and restrictions than, for example, in Europe. So Africa was relatively well prepared and thus bought itself time to prepare for higher case numbers.

Demographic factors could also play a role: With an average age of 19.7 years, Africa has a much younger population than any other continent. And according to the findings to date, younger people are less severely affected by Covid-19 and also die much less often from it.

That alone does not explain why the death rate is on average 40 times lower than in Europe and the USA. Some experts suspect that the much younger population of Africa may already have been infected (unnoticed) to the point of possible herd immunity.

The antibody studies published so far at least suggest that significantly more people went through the infection than the official data indicate.

Since October 2019 mainstream media warned of a severe economic recession that would hit the world in 2020. Now, with the Covid-19 – hoax, the best excuse for covering up the flaws of Neo-Liberalism has been found.

The suspicion is fed that Covid-19 is being used by governments worldwide in order to push through controversial measures that would under normal circumstances be met by fierce opposition by citizens.

And, of course all governments are taking advantage of hysteria they can use to distract public opinion about their own performance and divert it to an ominous reflex of fear.

Just South Africa, which seems to be hit severely by the Covid-19 pandemic is using it’s disciplinary powers to have president Cyril Ramaphosa vigorously fight against corruption and looting by officials.

Like in Europe, where British Prime Minister Boris Johnson was resisting for quite a while to accept that he has to become more socialistic than he had ever dreamed of in order to reform the rotten NHS, and France’s Macron who as an Ex-Rothschild investment banker had to trash his neo-liberal agenda, the fear of an uprising over Covid-19 measurements, seem to have positive effects on some leaders.

And, US – president Donald Trump seems to be the only leader in the old Western World who understood that he needs to resist the temptation in order to succeed and get re-elected. President Trump understood that he had been put under pressure by the Covid-19-hoax and managed to turn the table at the eleventh hour.

Boris Johnson only gave in after having experienced the intensive care himself.

never do it in front of one’s own door a comment by Ralph T. Niemeyer If anything has become clear in the past days…