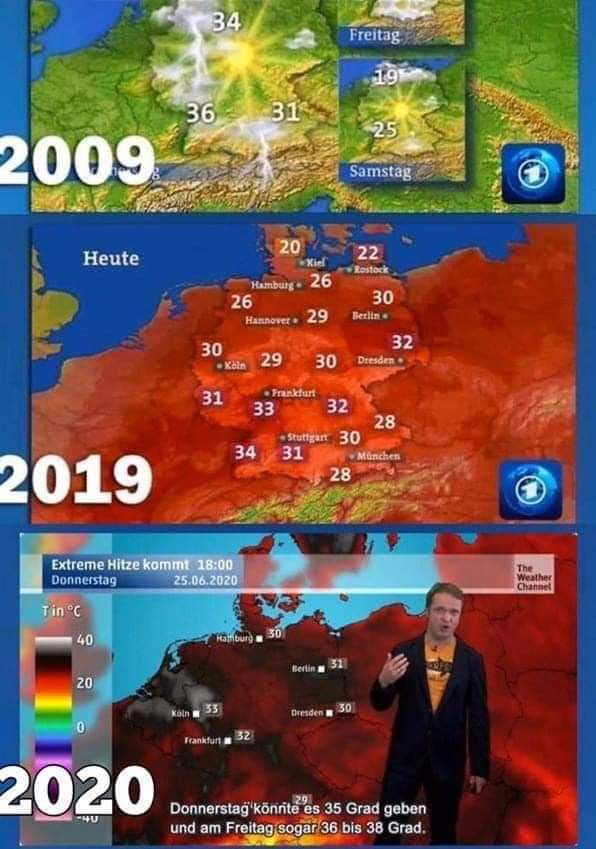 even the weather news on German state TV engages in dramatizations

Apart from whether one believes in governments to have the best on their minds when imposing drastic civil rights restrictions upon their citizens during the so called Covid-19 pandemic that in some countries such as Germany have been less lethal than any usual seasonal influenza, mainstream media and social platforms such as Facebook or YouTube execute a so far unimaginable control over freedom of speech.

So called ‘facts checkers’, which are certainly not impartial at all, delete statements and videos that are not aligned with the official version that the World Health Organisation (WHO) that is to a large extend funded by private entrepreneurs such as Bill Gates who has business interests in getting his vaccination programs out as he openly admitted on Germany’s first TV channel ARD in a primetime interview.

Are we becoming a stalinist North-Korea? Not really, but the trend is terrifying and even if the comparison with North-Korea is exaggerated, what is currently happening is unfortunately the opposite of freedom of expression.

The assertion that the fact that I am free to say what I think is proof that it is wrong is the threat of fascism. The synchronized media multiply in a campaign-like manner that they can no longer be distinguished. That was different 30 years ago. Since then it has been going downhill.

Media worldwide engage in dramatizations that are in most cases immediately proven unjustified and we witness a radicalisation that is unhealthy for any democratic debate.

Like US media is doing it already for 40 years longer than our European and especially the German partly state controlled TV and radio stations, are gradually following the same pattern. Suddenly, the fact that summers are giving us some hot days, are illustrated by media as a deep red warning, just as if we didn’t have hot summers in the 1970ies when we kids saw the tarmac on the roads melt.

These dramatizations are provoking resistance as people remember that they also lived in a normal way beforehand and start to doubt their media.

But, to doubt the official mainstream media puts oneselves nowadays immediately into a right-wing corner of a conspiracy theorist, antisemite or esoteric denier, even if one actually agrees to fight the effects of climate change whether it is manmade or a rather usual and frequent change of solar activity, and to execute more hygienic caution and a bit more distance to stop the spread of any viruses and diseases.

It is where the ordinary citizen is being lost now as media like in a radical stalinist regime makes it be blasphemous to question whether it is necessary to abolish civil rights and impose a muzzle on everyone.

It would be time for a heart to heart talk between governments and citizens and to tell them the truth: that globalization and neoliberalism have failed and that it was necessary to introduce a new economic model that is more sustainable, more social and more peaceful.  If that was on the minds of governments, I am sure we citizens of this planet would full heartedly agree and support our governments even without this dramatizations.

But, of course, if that progressive agenda is not what the rulers have on their minds but want to make the rich richer once more, then the abuse of power by raising fear about some pandemic or weather patterns are evil and provoke resistance by all citizens who still can use their brains for free thinking and have a gut feeling telling them what is right and what is wrong.

While all commentators are focussing these days on BREXIT, one ought to think about Africa, humanity’s mother continent breaking the chains of her…