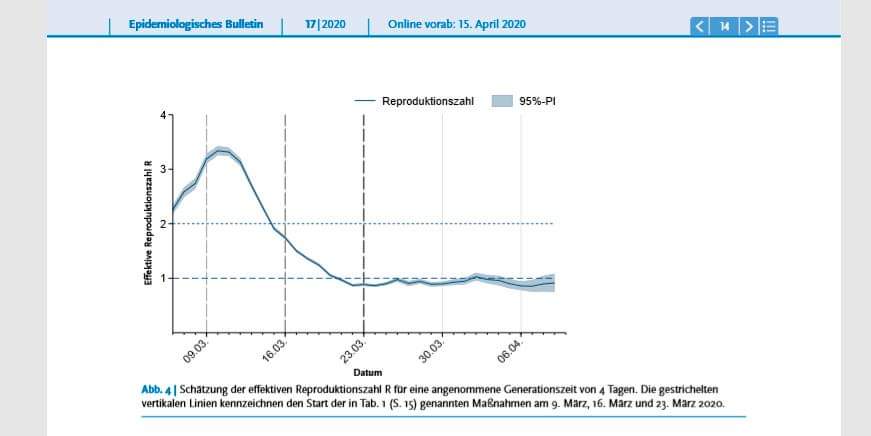 Beyond doubt: Reproduction Rate already declined in Germany before lockdown

The federal government has announced too high infection numbers around the federal-state summit on Thursday. A spokeswoman for the Federal Ministry of Health admitted at the weekend that the number of 40,000 people who were acutely infected was incorrect.

The Chancellery did not want to comment on Sunday at the request of the Reuters news agency. In fact, based on the figures from the Robert Koch Institute (RKI) on Thursday, just over 29,000 people were infectious.

Chancellor Angela Merkel had spoken on Thursday after the federal-state summit as well as health minister Jens Spahn of 40,000 – almost a third more than the RKI stated. At the same time, Spahn had given this number in a guest post for the Frankfurter Allgemeine Zeitung (FAZ).

Merkel had answered a journalist’s question about the different parameters she mentioned for possible relaxation: “Today we are currently 40,000 infected and a total of 150,000 to 160,000.”

Spahn had opened a calculation on Wednesday, which is probably the cause of the error: He spoke of 157,000 infected and 120,000 recovered, and thus a number of 37,000 acutely infected.

This subtraction obviously ignored the number of deaths, which was over 6000. According to RKI figures, only around 31,000 were infectious. Since the number of people who have been cured has clearly exceeded that of the newly infected for a long time and the number of deaths is also increasing, the number for the day of the Bund-Länder meeting was just over 29,000.

As of Sunday, it has dropped further to a good 25,000. The number is also important with regard to possible loosening of the corona layers. Because in order to keep the epidemic under control, the infectious must be identified and isolated.

For this, the health authorities are being strengthened. The RKI had said that this would probably be possible if the number of new infections was less than 1,000 per day. In the past two days, the number of cases reported fell below this mark.

However, the RKI points out that various health authorities have not provided any data due to the holiday weekend.

An Eye for an Eye, a vessel for a vessel