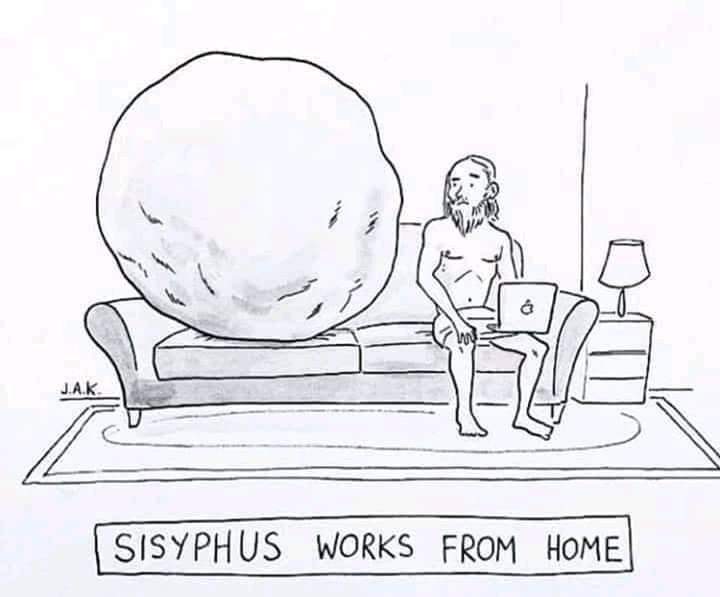 Word is in the street that Sisyphus was a German

Addendum of April 10, 2020: German TV, the ZDF, in it’s program “Lanz” on April 9, 2020 discloses that the mortality rate among the Covid-19 infected in the only representative study in Heinsberg, in the state of North-Rhine-Westphalia, carried out by the University Clinic of Bonn, under the direction of Professor Hendrik Streeck, is 0.36% (compared to 0.40% for influenza) and 0.06% based on the total population of Germany of 82 million.

This does not justify any of the exemptions and restrictions on fundamental rights. In order to be able to maintain the measures nonetheless, there are fears that Health Minister Jens Spahn, who has recently been visited by US oligarch Bill Gates, and alleged accomplices will use terrorist means and attack the population with biological weapons in order to obtain the frightening numbers that justify maintaining the controversial infection control law.

Since Mr. Spahn is warning of the second wave of infections although there hasn’t been anything more serious than a usual influenza “wave” so far, one may expect something to be cooking by Germany’s deep state, that is famous for it’s secret agendas and covering up of neo fascist attacks.

This law overrides the separation of powers of the Federal Republic of Germany and allows Federal Health Minister Jens Spahn to govern bypassing both houses of parliament, the Bundestag and Bundesrat.

Hitler’s NSdAP could not have done better in 1933. Critics of this “authorization”, which unlike in 1933 even left-wing deputies agreed to, are put out of business.

For example, the website of the Heidelberg based lawyer Beate Bahner, who had lodged a constitutional complaint and applied for injunctions at the Federal Constitutional Court in Karlsruhe, was shut down and an investigation was initiated by the Heidelberg public prosecutor and the police unit called “State Protection”.

This quote comes from none other than the head of Hamburg forensic medicine, Professor Klaus Püschel (67). And they are amazing words. Because he talks about exactly the virus that is currently turning the world upside down: Corona.

Püschel and his team are currently investigating the corona dead from Hamburg.

The goal: “We want to learn from the dead for the living. We try to understand what the so-called corona dead actually died from, in order to draw conclusions for the clinical treatment of the people suffering from it. We take a closer look: How did the virus affect the heart, lungs and other internal organs? “

And Püschel has already gained initial insights: So far, not a single person with no previous illness has died of the virus in Hamburg. “All of those we have examined so far had cancer, a chronic lung disease, were heavy smokers or heavily obese, had diabetes or had a cardiovascular disease.”

So the virus was the last drop, so to speak, that was the keg Overflow brought. “We had – no one knows yet – the first 100-year-old who died of Covid-19.” Was it the last drop? “The very last one,” said Püschel.

Püschel wants to calm the population down. “By focusing strongly on the rather few negative processes, fears are created that are very burdensome,” says the legal doctor. There is no reason for fear of death in connection with the spread of the disease here in the Hamburg region, he says. “Covid-19 is a deadly disease only in exceptional cases, but in most cases it is a mostly harmless virus infection.

The fact that the world is still upside down is due to the fact that the virus spreads very quickly because there is still no immune protection. “But we don’t have Italian conditions in Germany. We have a good health system and I am convinced that we can master the pandemic well. ”

If the political reaction to Covid-19 is excessive, we want to know from Professor Püschel. Answer: “I’m glad that I don’t have to make any political decisions. But I say that as a doctor I made other decisions. ”

Also across Europe there is nothing like a higher mortality rate even though that one can say that Covid-19 may be as lethal or even more lethal than influenza, but no unusual numbers are evident.

interview by Andrea Drescher An operation of the mobile operation forces MEK/SEK because of alleged „misuse of title“ On January 30, 2021, the dwelling…