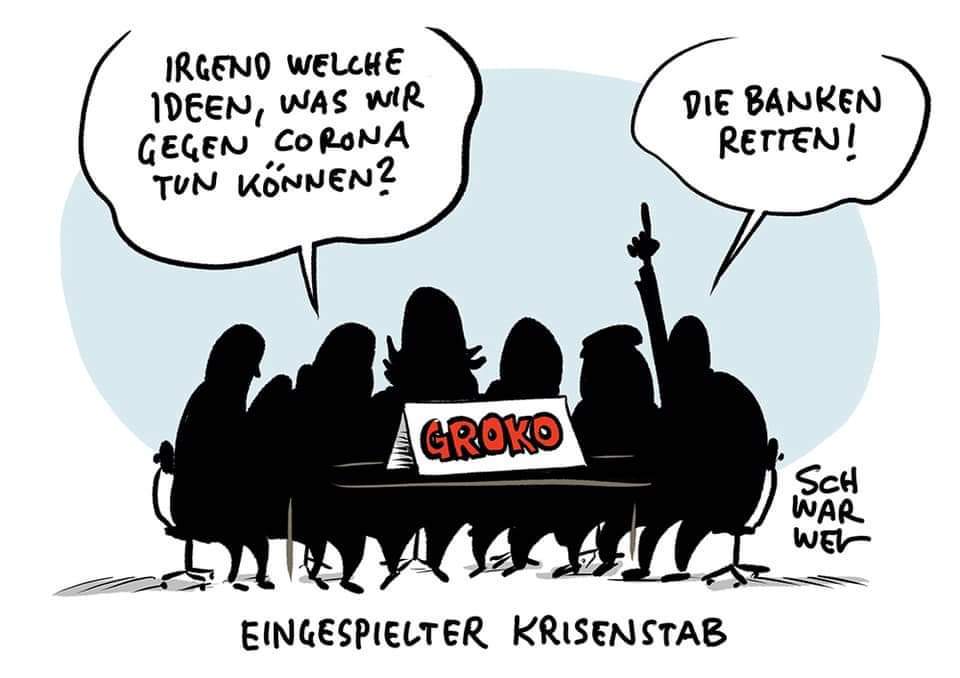 German Gov’t Crisis meeting: “Any ideas what we could do against Coronavirus? – Let’s rescue the banks!”

It appears as surprising as the Burning of the Reichstag in Berlin ahead of Adolf Hitler’s raise to power in 1933 which had been initiated by his own foes in order to create chaos and confusion so that the law of empowerment swept the NAZIs to power amid a deeply divided and frustrated German society full of fear.

After Fridays for Future and Greta Thunberg did not manage to make people change their lifestyle radically, the government’s last resort is to impose a tough regime based on fear and fed by uncertainty.

Fear mongering is swinging with every statement by politicians these days and is being enhanced by a complicit mainstream media that stirs concerns instead of providing useful information and questioning the official version of truth.

Meanwhile Bloomberg reports that of the diseased people in Italy, 99% had other medical reasons to die while also being infected with Covid-19.

At the same time, EU member states are once more ignoring completely what  EU Commission, EU Council or European Parliament may say to all the unilateral actions from closing of borders to public health and safety matters. Like in the very beginning of the financial crisis of 2008, it is as if the EU institutions didn’t exist.

Coronavirus COVD-19 is said to bring down the world economy, but it might rather be the panic surrounding it. Every day 30,000 children die of hunger on this rich planet without anyone really being worried about it as more trillions are being spent on arms whereas only a few billion would rescue these children and give them free healthcare and education.

Now, since 2008 the toxic foam created in the virtual reality casinos in Wall Street, ‘the City’ and in other capitalistic headquarters has not vanished but instead the laxity of implementation of financial regulation has created even bigger bubbles that are about to burst and rain down onto the streets of the real economy thus leading to hyperinflation.

What it needed to cover up the flaws of brutal Manchester capitalism that followed exactly the predictions of Karl Marx, was a deus ex machina crisis that imposed a force majeure noone can evade: a virus. But, like in the climate change debate one is being silenced by mainstream media when one doubts the official version.

So how dangerous is the virus COVD-19? There are many compelling reasons to conclude that SARS-CoV-2, the virus that causes COVID-19, is not nearly as deadly as is currently feared.

But COVID-19 panic has set in nonetheless. You can’t find hand sanitizer in stores, and N95 face masks are being sold online for exorbitant prices, never mind that neither is the best way to protect against the virus (yes, just wash your hands).

The public is behaving as if this epidemic is the next Spanish flu, which is frankly understandable given that initial reports have staked COVID-19 mortality at about 2–3 percent, quite similar to the 1918 pandemic that killed tens of millions of people.

Allow me to be the bearer of good news. These frightening numbers are unlikely to hold. The true case fatality rate, known as CFR, of this virus is likely to be far lower than current reports suggest.

Even some lower estimates, such as the 1 percent death rate recently mentioned by the directors of the National Institutes of Health and the Centers for Disease Control and Prevention, likely substantially overstate the case.

We shouldn’t be surprised that the numbers are inflated. In past epidemics, initial CFRs were floridly exaggerated. For example, in the 2009 H1N1 pandemic some early estimates were 10 times greater than the eventual CFR, of 1.28 percent.

Epidemiologists think and quibble in terms of numerators and denominators—which patients were included when fractional estimates were calculated, which weren’t, were those decisions valid—and the results change a lot as a result.

We are already seeing this. In the early days of the crisis in Wuhan, China, the CFR was more than 4 percent. As the virus spread to other parts of Hubei, the number fell to 2 percent. As it spread through China, the reported CFR dropped further, to 0.2 to 0.4 percent.

As testing begins to include more asymptomatic and mild cases, more realistic numbers are starting to surface. New reports from the World Health Organization that estimate the global death rate of COVID-19 to be 3.4 percent, higher than previously believed, is not cause for further panic.

This number is subject to the same usual forces that we would normally expect to inaccurately embellish death rate statistics early in an epidemic. If anything, it underscores just how early we are in this.

Here’s the problem with looking at mortality numbers in a general setting: In China, 9 million people die per year, which comes out to 25,000 people every single day, or around 1.5 million people over the past two months alone.

A significant fraction of these deaths results from diseases like emphysema/COPD, lower respiratory infections, and cancers of the lung and airway whose symptoms are clinically indistinguishable from the nonspecific symptoms seen in severe COVID-19 cases.

And, perhaps unsurprisingly, the death rate from COVID-19 in China spiked precisely among the same age groups in which these chronic diseases first become common. During the peak of the outbreak in China in January and early February, around 25 patients per day were dying with SARS-CoV-2.

Most were older patients in whom the chronic diseases listed above are prevalent. Most deaths occurred in Hubei province, an area in which lung cancer and emphysema/COPD are significantly higher than national averages in China, a country where half of all men smoke.

How were doctors supposed to sort out which of those 25 out of 25,000 daily deaths were solely due to coronavirus, and which were more complicated? What we need to know is how many excess deaths this virus causes.

This is where the DiamonPrincess data provides important insight. Of the 3,711 people on board, at least 705 have tested positive for the virus (which, considering the confines, conditions, and how contagious this virus appears to be, is surprisingly low).

Of those, more than half are asymptomatic, while very few asymptomatic people were detected in China. This alone suggests a halving of the virus’s true fatality rate.

On the Diamond Princess, six deaths have occurred among the passengers, constituting a case fatality rate of 0.85 percent. Unlike the data from China and elsewhere, where sorting out why a patient died is extremely difficult, we can assume that these are excess fatalities—they wouldn’t have occurred but for SARS-CoV-2. The most important insight is that all six fatalities occurred in patients who are more than 70 years old.

Not a single Diamond Princess patient under age 70 has died. If the numbers from reports out of China had held, the expected number of deaths in those under 70 should have been around four.

But there’s another thing that’s worth remembering: These patients were likely exposed repeatedly to concentrated viral loads (which can cause worse illness).

This all suggests that COVID-19 is a relatively benign disease for most young people, and a potentially devastating one for the old and chronically ill, albeit not nearly as risky as reported.

Given the low mortality rate among younger patients with coronavirus—zero in children 10 or younger among hundreds of cases in China, and 0.2-0.4 percent in most healthy nongeriatric adults (and this is still before accounting for what is likely to be a high number of undetected asymptomatic cases)—we need to divert our focus away from worrying about preventing systemic spread among healthy people—which is likely either inevitable, or out of our control—and commit most if not all of our resources toward protecting those truly at risk of developing critical illness and even death: everyone over 70, and people who are already at higher risk from this kind of virus.

Some treatments were delayed. So even the lower CFR found on the Diamond Princess could have been even lower, with proper protocols. It’s also worth noting that while cruise passengers can be assumed to be healthy enough to travel, they actually tend to reflect the general population, and many patients with chronic illnesses go on cruises. So, the numbers from this ship may be reasonable estimates.

This all suggests that COVID-19 is a relatively benign disease for most young people, and a potentially devastating one for the old and chronically ill, albeit not nearly as risky as reported.

Given the low mortality rate among younger patients with coronavirus—zero in children 10 or younger among hundreds of cases in China, and 0.2-0.4 percent in most healthy nongeriatric adults (and this is still before accounting for what is likely to be a high number of undetected asymptomatic cases)—we need to divert our focus away from worrying about preventing systemic spread among healthy people—which is likely either inevitable, or out of our control—and commit most if not all of our resources toward protecting those truly at risk of developing critical illness and even death: everyone over 70, and people who are already at higher risk from this kind of virus.

This still largely comes down to hygiene and isolation.

But in particular, we need to focus on the right people and the right places. Nursing homes, not schools. Hospitals, not planes. We need to up the hygienic and isolation ante primarily around the subset of people who can’t simply contract SARS-CoV-2 and ride it out the way healthy people should be able to.

Yes, this disease is real. And, yes, there truly do appear to be vulnerable patients among us, those far more likely to develop critical illness from it. And that relatively small subset, if infected in high numbers, could add up to a tragically high number of fatalities if we fail to adequately protect them.

The good news is that we have huge advantages to leverage: We already know all of this and have learned it remarkably quickly. We know how this virus spreads. We know how long people are contagious. We know who the most vulnerable patients are likely to be, and where they are.

Healthy people who are hoarding food, masks, and hand sanitizer may feel like they are doing the right thing.

But, all good intentions aside, these actions probably represent misdirected anxieties. When such efforts are not directly in service of protecting the right people, not only do they miss the point of everything we have learned so far, they may actually unwittingly be squandering what have suddenly become precious and limited resources.

So now the major industries and banks again found a way to cover up their systematic mismanagement and like in 2008 make the taxpayers foot the bill.

Even US – President Donald Trump who first didn’t want to buy the hoax now was forced by Wall Street to fuel the markets while European Central Bank President Christine Lagarde pledged today to buy up all bad debt, all like her predecessor Mario Draghi did so in the last crisis, too. The financial merry-go-round is in full swing again while the population is kept hostage at gunpoint.

Every government around the globe will use this crisis in order to push through their own agenda now and the citizens will buy it as fear is the tool employed by the powers to be.