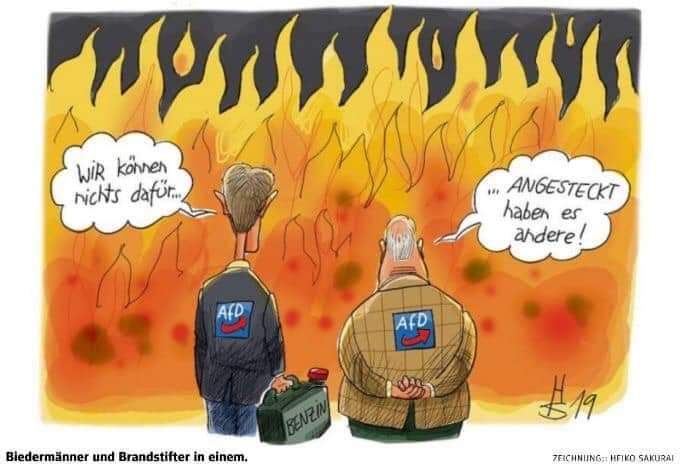 It is not easy to determine what really happened and who benefited from a terror attack like in Hanau, near Frankfurt, Germany,  before the dust settled as the question ‘cui bono’ can be misleading since one can not rule out a false flag operation for which NATO’s ‘Gladio’ stay-behind force infamously known for similar attacks in the 1980ies in Italy and now officially be dysfunctional, might be responsible.

One thing is clear, though, the official version of the lone wolf radicalised right-wing conspiracy theorist Tobias Rathjen raises more questions that it gives answers.

First of all, the alleged assassin, although he posted pamphlets of racist and paranoid comments and by this would perfectly fit into the public picture of someone who got enraged amid anti-foreigner sentiment, supposedly had killed his own mother after killing 9 citizens of migrant backgrounds and then himself.

Like in similar attacks of recent years in France, Belgium, the, the US, the UK and also in Germany, the alleged assassin is dead so that no lengthy investigation and court trial will be necessary.  This is kind of convenient as the authorities save a lot of time and taxpayer’s money.

But, what if someone else was to be blamed for the attack and the entire set up had been an undercover false flag operation in order to let’s say destabilise the nation that seems to be torn apart between right-wing neo-fascism promoted by protagonists of the Alternative für Deutschland (AfD) and leftists who felt betrayed over the surprising parliamentary cooperation between Chancellor Angela Merkel’s Christian Democratic Union (CDU) on federal state level in Thuringia and the neo fascists of AfD?

The brutal attack of Hanau on 19th February has united leftists and centrist politicians branding AfD as being indirectly responsible for fuelling the debate by hate speech in social networks and in public debates in state parliaments as well as the Bundestag and on mainstream media channels.

Some eye witness reports, though, claim that the assassinations were carried out by several persons and that the alleged assassin named as Tobias Rathjen has not been among them but that these were wearing Hells Angels outfit.

Since German authorities can not be trusted in investigating right-wing and neo-nazi crimes thoroughly and in an unbiased way as the scandals about the cover-up of similar crimes conducted by the so called “Nationalsozialistischer Untergrund (NSU)” proved in years long court proceedings in which the German domestic secret service ‘Verfassungsschutz’ had shredded thousands of documents, one can hardly deny that there might be a larger conspiracy again possibly in order to destabilise Germany further amid leadership quarrels between centrist and right wing CDU members preparing for the demise of Chancellor Angela Merkel.

The ‘Bundesamt für Verfassungsschutz’ (federal office for protection of the constitution) known for it’s Agent Provocateure – and infiltration – tactics decided to leave the files under closure for 120 years.

Last but not least, the right-wing members of CDU who wish to collaborate openly with AfD, cite the cooperation between CDU and leftists in Thuringia as the breaking with a taboo in post unification Eastern Germany that, following the horse-shoe analogy of two equally bad political extremes, should also allow for collaboration with neo fascists in order to win back votes at the far right.

Following the attacks of Hanau, bringing up the number of victims of neo Nazi crimes to 200 in the past 30 years since unification, German authorities and mainstream media warn that in this heated political climate revenge attacks from leftists would be likely.

The leftists, however, also the extreme leftist Antifascists (“Antifa”) in Germany, although being known for showing ruthless tactics at demonstrations causing some material damage so far could not be blamed for any killings.

With the arrival of NATO troops for the anti-Russian ‘DEFENDER2020’ manoeuvre in the Baltic Republics that provokes a lot of political controversy in Germany, the branding of rightists and leftists street violence would be a perfect scenario in which citizens rights might be diminished in order to ‘protect’ NATO manoeuvres.