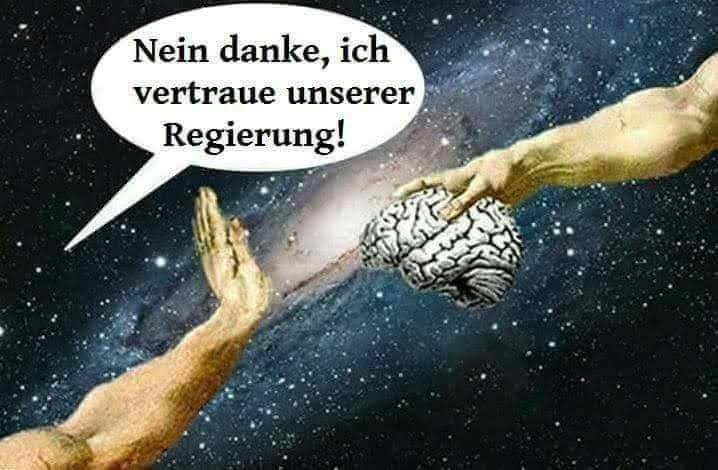 “No thanks, I trust our governments!”

This year’s flu wave already killed 130 people in Germany whereas the Corona virus Covid-19 so far killed zero people. Nevertheless, the debate is raging in Germany as heated as the presumed Climate Change and Refugee crisis. Those who doubt that there is a real life-threatening pandemic danger at all are like in the Climate Change debate swiftly put into the right-wing corner.

But, what is behind the mainstream conspiracy theory of the ‘radicals in the centre’ as Greens and Christian Conservatives are nowadays referred to in Germany?

Although the German flu as an influenza infection has already caused over 80,000 illnesses and 130 fatalities, the mainstream media is building up the corona virus as a pop, which has so far not claimed any deaths in Germany and very few deaths in Europe. In China itself, the flu is much more aggressive – but still within the scope of normal flu waves.

After the trade dispute with China was settled for the time being, the stock markets were hot, probably overheated.

Four US corporations have even reached a trillion dollars worth over $ 1000 billion.

With the rise of Google’s parent Alphabet beyond the trillion-dollar market cap, they’re complete, the “Four Horsemen”.

In recent months, the stock exchanges worldwide have climbed to new highs: The German stock market index DAX, for example, rose to a new high last week at 13,640 points – if only because of the growing fear of the effects of the corona virus for only a few hours.

The four giants include Apple, Amazon, Microsoft and Google.

No company has so much value – especially not values ​​that are pure service providers, parcel services / retailers, software companies or search engines – no matter how much they talk up the cloud system. One can compare the hype about these corporations with the mania surrounding Radio stocks in the 1920ies.

Apple also suffers from the competition from Huawei and Samsung and is starting to loose out big time with overpriced and uncompetitive cell phones.

So how do you sell people a predictable stock market crash that pulls all world stock markets down?

This way the Corona virus comes in handy.

And in fact, the world stock exchanges lost $ 1.7 trillion in market value in one day and the next day, while shares are still going down today, too.

With the radical centrist’s virus conspiracy theory, one can disguise the completely inflated stock market and the desolate situation of the global economy.

Instead of telling the truth to the people, a myth is being built that defies any logic and every rationality.

In the spectrum of the political class from German centrist Christian Democratic Union (CDU) to neo-fascist Alternative für Deutschland (AfD) to Social Democrats (SPD) and the Greens, this myth is fostered by the mainstream media of the lords of the group and the state media, which are close to them, in order to lead the peoples of the world behind the spruce.

For example, US President Trump tweeted that there is no danger in the US and that the shares would look good again. So he himself creates the connection between the virus and shares – albeit in a soothing form. That is certainly not inadvertently formulated the same way.

Mr. Trump knows that if the economy goes into recession his re-election that otherwise seems certain, would be at jeopardy.  So for Democrats Coronavirus is the only realistic chance to win the presidential elections after their ludicrous impeachment-attempt.

Economist Nouriel Roubini correctly predicted the 2008 financial crisis. Now, he believes that stock markets will plunge by 30 to 40 percent because of the coronavirus. And that Trump will lose his re-election bid.

From Tonkin to Aleppo: US learnt that strategy to cover up war crimes had worked well   Analysis by Ralph T. Niemeyer, retired editor-in-chief…