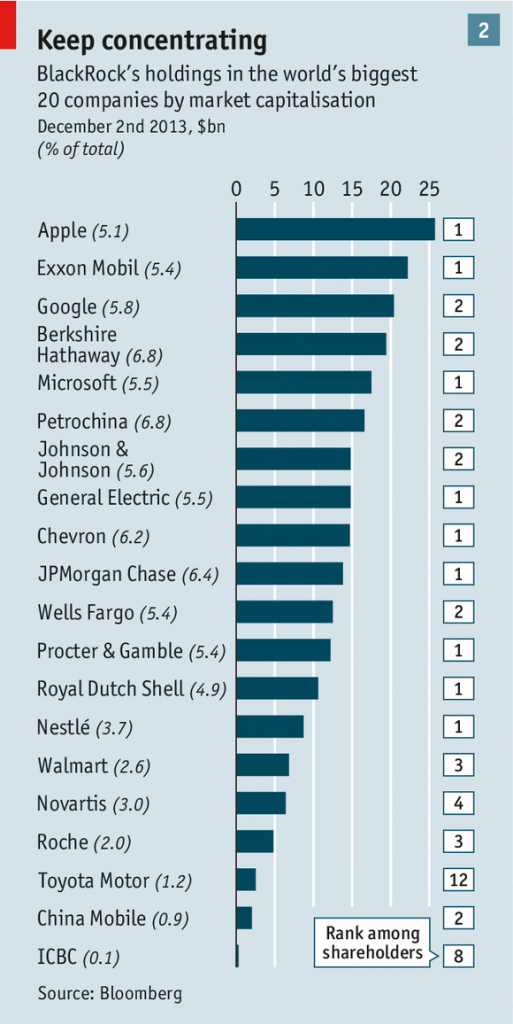 BlackRock – who really rules the world?

Larry Fink is probably the most powerful man in the world. His blackrock financial empire manages $ 4 trillion. In Germany, too, his company is involved in almost all groups, and is the largest single shareholder of nine DAX companies. With it’s decisions, BlackRock influences the fate of entire cities and countries.

BlackRock was founded in 1988 and has been operating on the German market since 1994, with a branch in Austria since 2007.

Germany and Austria are among the strategic core markets of BlackRock. BlackRock currently manages over 1000 funds worldwide, of which over 200 funds are available to private investors in Germany and Austria. With assets under management of $ 4,324 trillion as of December 31, 2013, BlackRock became the world’s largest wealth manager.

While the big banks like Deutsche Bank or Goldman Sachs are in the spotlight, a large part of the financial business is hidden. Blackrock boss Laurence Fink makes companies and politicians dance to his tune – and even axes jobs for German employees.

It is particularly interesting to see German mainstream media push for Friedrich Merz, until 2 weeks ago the top representative of BlackRock in Germany, to become successor of Chancellor Angela Merkel. Like in France where a former investment banker of Rothschild became president, Germans seem to be eager to vote for their own slaughterer.

The Blackrock force in Athens worked under the code name Solar, 18 security guards guarded them around the clock. Given the daily demonstrations, discretion seemed imperative: no analyst was allowed to identify himself as an employee of Blackrock.

In order to attract as little attention as possible, the experts settled in a dusty office block in a dilapidated area of ​​Athens – between strip clubs and burned-out buildings. Craig S. Philipps, the head of the BlackRock squad, hung a poster of the horror film “The Exorcist” in his office. “We had to be very careful here,” he says.

Together with Greek interpreters, the Aladdins from the USA rummaged through the books of 35 Greek banks. Within three months, they checked ten million individual balance sheet items – from corporate loans to construction loans to consumer loans.

There was a lot of debate between the Greek banks and their American auditors during the valuation. In the end, however, BlackRock prevailed: all loans for which there was no tangible collateral were valued at zero.

At the end of 2011, the Greek central bank and the troika from the EU, ECB and IMF were looking for neutral experts to determine the capital requirements of the Greek banks. It quickly became clear that BRS was the only option. “They were the only ones who had already analyzed the banking system of an entire country at that time,” says Charalampos Stamatopoulos from the Greek central bank.

The BlackRock subsidiary permanently evaluates multi-billion dollar complex investment and loan portfolios, some of which contain loans and papers that are difficult to sell, with a gigantic computer system that can access 6000 mainframes in four IT centers worldwide.

EAST WENATCHEE in Washington State, in a data center between the orchards and hills, is a cluster of 6000 computers that monitors the assets of over 170 pension funds, banks, foundations, insurance companies, and others. Around the clock, these machines watch interest rate changes, bank failures, or natural disasters for trillions of dollars in assets. Every change has consequences, be it positive or negative.

After assessing these risks through this computer system, called Aladdin, 17,000 traders around the world decide when to buy or sell the assets. Aladdin is the name of the system that was also used by Greek banks – baptized after the owner of the magic lamp from “1001 Nights”. The BlackRock force in Athens worked under the code name Solar, 18 security guards guarded them around the clock.

The data center is the heart of the BlackRock. They single-handedly manage almost as much money as all private equity and hedge funds combined worldwide.

Although their holdings are almost all stocks, they are the largest shareholder in 50% of the world’s 30 largest corporations, holding not only stocks, but also bonds, commodities, hedge funds, and real estate. Everything that someone wants to invest in.

“If you are looking to buy or sell something, or invest, it is very difficult to get around Blackrock,” says the head of a major European insurer. This is because BlackRock is often the largest shareholder (see above chart).

In addition to the aforementioned companies, BlackRock is also represented here:

Commerzbank: BlackRock also engaged in Commerzbank. On September 16, 2013, they announced in a mandatory report that their exposure to the shares of the second largest German bank had been significantly expanded. Since then, they have held 5.22% of Commerzbank shares.

BlackRock  has held almost 4.9 percent of the insurance group Allianz since 2009.

Another example: After, for example, a hedge fund made half a billion dollars last year with the buyback program for Greek government bonds, other investors wanted to make their money that way. So – bet on saving Greece.

Candidate for boss of EU bank supervisor quizzed by MEPs

Danièle Nouy, the ECB’s nominee for the new post of EU bank supervisor, was vetted by MEPs on Wednesday at a hearing in which…