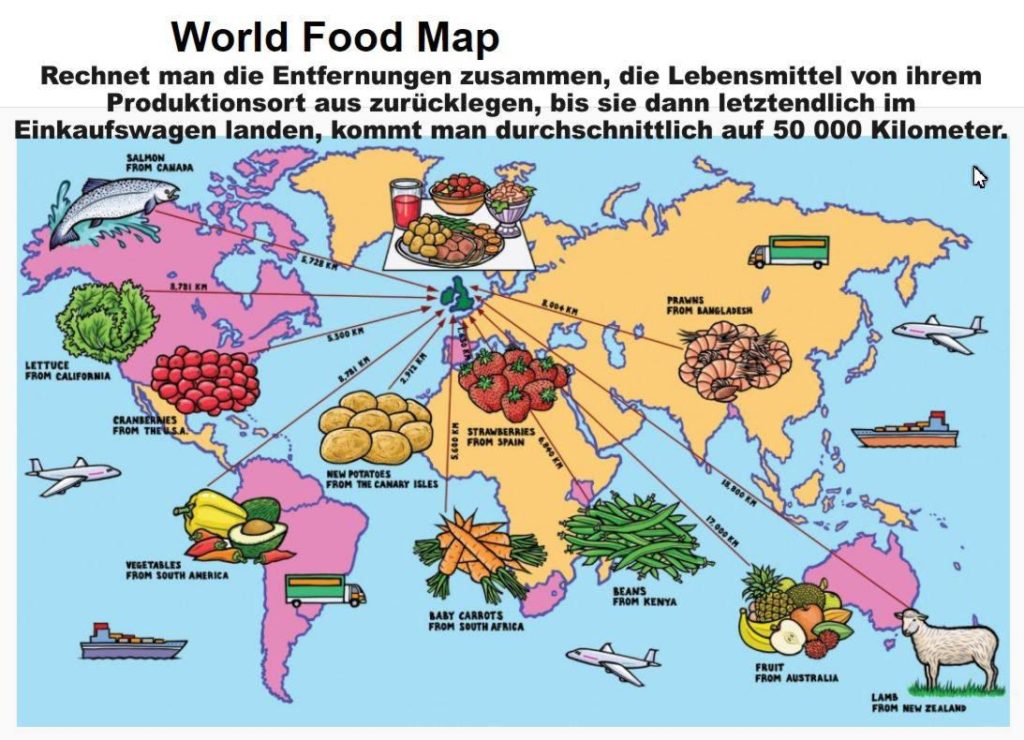 If you add up the distances that food travels from its place of production until it ends up in the shopping cart, you get an average of 50,000 kilometers.

Whether grapes from Peru, pineapples from Ecuador, raspberries from Morocco or strawberries from Egypt, avocados from Chile and Mexico or mangoes from Brazil. Meat comes from Brazil, Africa, Australia or New Zealand, to name just a few countries.

From China not only comes food and fish products or clothes, shoes and toys, but, as you can see from the crabs, they are pulted in China and then come back.

Producing cheaply also means that the supply chain is tough and that raw materials as well as meat, vegetables and fruit are transported from one end of the world to another by truck, ship or plane – and sometimes back again. But such topics are not heard at any climate conference!

Since companies do not have to pay the costs for the environment and the costs for processing are low, some goods such as crabs or chicken have traveled an insane way, because they travel around the world several times!

The fruit in the supermarket also has a bitter taste. Food shipped or driven all over the world, processed by women and children at the lowest wages and pumped full of preservatives.

“Avarice is cool” was an advertising slogan of the German electronics retail chain Saturn. This miserliness mentality has established itself in all industries, and how big the competition for cheap products is can be seen from the many supplements with all the cheap offers in the daily newspapers or in the mailbox.

Not only does it have to use a lot of trees for the consumer to know where there are special offers, no, the companies are increasingly coming up with something to produce even cheaper than the competition. Food is no longer cheap, it is cheap. The discounters’ red pencil campaigns have an impact on the entire retail sector.

Yes, it can’t get any crazier, you think:
Eggs from Ukraine and Argentina, poultry from Brazil and Thailand.

Germany exports eggs to Ukraine, which sells the eggs to Indonesia. Beef from Argentina, Paraguay and also from the USA, while China prefers meat “Made in Germany”. What is not consumed here goes to Africa. Germany exports meat to China, but gets meat from Thailand.

While in Latin America more and more rainforests and savannas are being cleared for the intensive cultivation of soy for animal feed in order to feed the animals in Germany, we also get meat from Brazil and Argentina.

It’s no crazier! The EU wants to boost meat consumption with 15 billion euros – eggs from Ukraine and Argentina – poultry from Brazil and Thailand and soon hormone meat from the US.

Yes, it is even crazier, because meat is not only carted around the world so that it is then consumed there, but also so that it can be processed in Poland, for example, where it is then on the plate again at the consumer in the country of origin of the meat lands. What is cheap is also produced cheaply, and who asks how many kilometers this product has covered.

Dumping prices – This affects the quality of the food. Sustainable agriculture and livestock farming is hardly possible anymore. The numerous food scandals are just a result of the “avarice is cool” mentality. How much the production costs and how many subsidies are in each individual product is kept secret.

European dairy products are available at low prices on Africa’s refrigerated shelves! German milk production is in full swing – despite overproduction, but were you also aware that milk powder from Europe is increasingly being processed in Africa? The durable milk powder is carted to Africa and processed into yogurt or drinking milk only on site.

And not just to Africa, as you can see from the following diagram. Also: Development aid with large agricultural groups in tow! European dairy products are available at low prices on Africa’s refrigerated shelves!

However, due to the low prices that supermarkets and discounters in Germany are willing to pay, there are always protests in the countries. The costs are not even covered and the workers there are sick with the pesticides that are used so that the bananas can also be “super great” carted to Europe.

Deal or not to deal

Swoboda on banking union negotiations: “Between a bad deal or no deal, we will choose the lesser evil: no deal” by Martha Devon Negotiations…