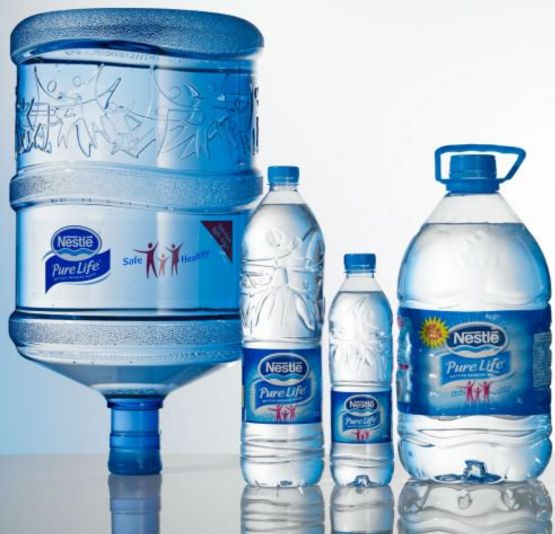 Nestlé is one of the most hated companies in the world and Nestlé is the largest food company in the world and has a history that would make even hardcore industrialists tremble. Nestlé pumps 50,000 liters of water per hour from Ethiopia’s soil.

In Nigeria, the struggle for land is considered one of the greatest security risks, and yet Nestlé built a new water factory for the “Pure Life” brand on 14.6 hectares.

Nigeria is suffering from a deadly water crisis – the lack of drinkable, accessible water has become a national emergency. While the crisis kills more Nigerians than the terrorist group Boko Haram,

Nestlé opened a new bottling plant in Abaji. And what does Nestlé do? In January 2019, the logo of Nestle Pure Life, its water brand, was renamed in Nigeria to ensure a healthy environment for Nigerians, “You will also notice that the new label has a new transparent planet logo and that is our commitment to Environment shows, ”said Gloria Nwabuike,Marketing Manager at Nestlé Waters.

Already in Pakistan it turned out that everything was dizzy and Nestlé even had to go to court. Nestlé has monopolized water wells in Africa to prepare for future water shortages, while the African population has inadequate access to this natural resource.

Water is not only an elementary part of life – it is a human right. All the more alarming the global situation: Millions of people suffer from water shortages. According to Unicef, 2.1 billion people worldwide have no access to clean water.

Around 884 million people do not even have a basic water supply. People or families in poorer regions of the world are particularly affected. In Africa in particular there is a dramatic shortage of water.

Nestle Nigeria Plc is a listed food and beverage company headquartered in Lagos. It is majority owned by Nestle SA in Switzerland. The main plant is located in Agbara Industrial Estate in the state of Ogun.

In the meantime, the Nestlé plant has been opened on a 14.6 hectare site with potential for future expansion.

The fight for land is one of the biggest security risks in Nigeria. It is not only Nigeria that is not getting a grip on the land dispute and the raids on cattle herds, so-called ‘cattle raids’.

For decades there have been conflicts over pastureland and resources in many African countries – for example in Kenya and Ethiopia. Especially where there is no rain and entire areas dry up.

Climate change leads to drought after drought, water is becoming scarce, fertile soils for herds of cattle are dwindling – and with it the livelihood of nomads and herdsmen.

It was only in January 2019 that the residents of the Pakudi village in Ogun, Obafemi-Owode, fled their homes out of fear of a crisis. This happened after a farmer in the village killed a shepherd who allegedly destroyed his farmland. The villagers fled the community because they feared revenge attacks by other shepherds in the village.

This mechanism inevitably leads to the overexploitation of the most precious good! How? If countries want loans from the World Bank or IMF – then they have to privatize their water!

But, not only becomes water a commodity that only wealthy people can afford, but also the standard is getting very poor as one can see from Nestlé and other’s performance in South Africa where a corrupt leadership has granted water licenses to Nestlé and Coca Cola amid a terrible water crisis due to Acid Mine Drainage and mismanagement of authorities.

German first TV channel ARD reported that even workers at Nestlé’s plant are not able to supply their families with the water they bottle every day in South Africa.

And, with a very poor pH of less than 5 and terribly high Chlorine level that exceeds the recommendations by the World Health Organisation (WHO) the products Nestlé brands ‘pure life’ can only be seen as a cynical joke.

Nelson Mandela had been sent to prison for fighting against corruption and the racism of the Apartheid regime, and he demanded nationalisation of the mines and natural resources. His wife Winnie had to endure subversion and violence, forcing her to pick up a nasty fight. Their successors replaced the White’s racism with social apartheid and privatised water while the owners of the now-empty mines, demanded their nationalisation in order to evade the huge costs to clean up the mess. Madiba and Winnie Mandela would rotate in their graves one can imagine.