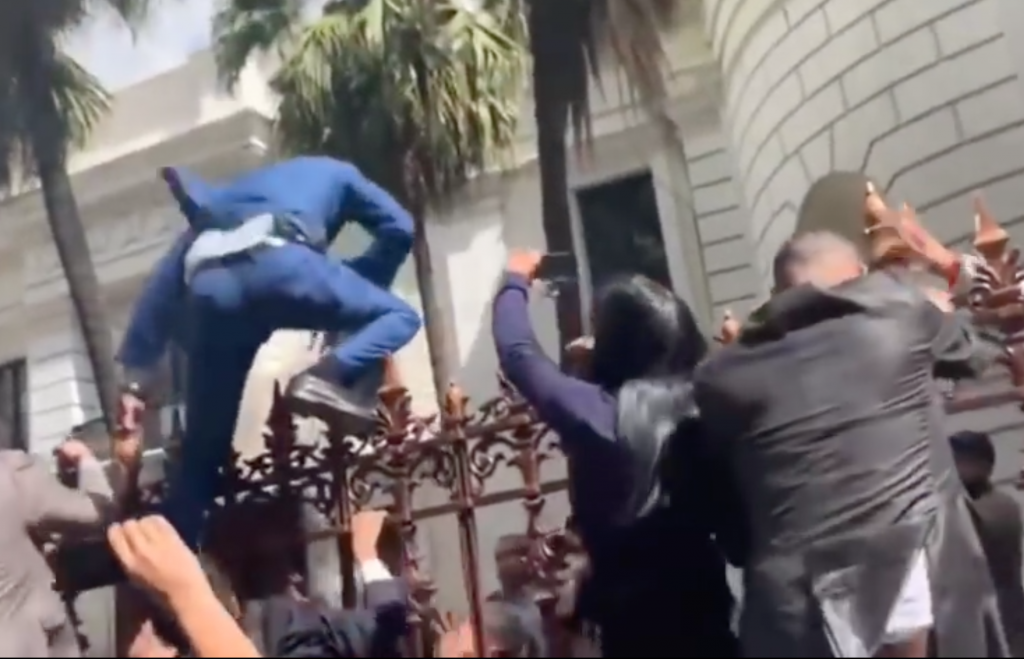 After the election of a new presidency of the National Assembly in Venezuela, the previous incumbent Juan Guaidó now has a parallel committee under his leadership. At an improvised meeting of opposition MPs in the building of the government-critical daily El Nacional, he was also re-elected as President of Parliament on Sunday. 100 opposition MPs are said to have voted for him, including members of the 16 de Julio faction, which has taken an equally critical stance towards President Nicolás Maduro and Guaidó. Previously, opposition politician Luis Parra had been named Guaidó’s successor at a scandal session in the National Assembly.

“I am grateful for the honor you have shown me,” said Guaidó minutes before his re-election. According to his own information, he himself voted for the extension of his term of office. “I swear before God and the Venezuelan people to enforce this constitution and the duties associated with the office of President of the Parliament and Interim President,” he said after the vote.

Guaidó had appointed himself interim president a year ago, justifying his position as head of parliament. It is recognized by around 60 countries, including mostly western and right-wing Latin American governments.

Juan Pablo Guanipa of the First Justice Party (Primero Justicia), whose immunity had been waived by the Supreme Court, and Carlos Eduardo Berrizbeitia of the Project Venezuela Party (Proyecto Venezuela) were elected first and second vice-presidents at the parallel session.

Guaidó had previously lost his position when Parras was elected new parliamentary president. In addition to Parra, two vice presidents had been appointed in parliament, also from the ranks of the opposition. It is Franklin Duarte from the Christian Democratic party Copei and José Gregorio Goyo Noriega from Guaidó’s party Voluntad Popular. The minority faction in the National Assembly, the Patriotic Block, the government party alliance, had not put up its own candidates.

The US government threatened further sanctions against President Maduro’s government after Sunday’s double election. Washington will step up economic and diplomatic aid to the Guaidó camp, it said. “The US will do more to help the National Assembly and its legitimate leadership by increasing pressure against the dictatorship, its leaders and allies, inside and outside Venezuela,” said US Special Envoy for Venezuela Elliott Abrams.

Guaidó’s statement that he and his colleagues were excluded from the constituent session of the National Assembly caused ongoing debates. The previous incumbent had tried on Sunday to climb over the bars in front of the parliament building. Government camp officials then reiterated that Guaidó could have attended the meeting without any problems. In the face of an impending defeat, he staged a scandal.

Indeed, opposition MP Williams Dávila confirmed in an interview that there was free access to the plenary. A video shows a national guard who asks the previous parliament president to take the main entrance. However, Guaidó refused and insisted on entering Parliament with Gilberto Sojo, who had been stripped of his mandate by the judiciary.

“Guaidó was not allowed to jump over the bars because he could have walked through the main door of the National Assembly without any problems,” wrote the former Colombian presidential candidate Gustavo Petro in an ironic comment on Twitter. Petro criticized Latin American media, from which the version of Guaidós was adopted uncritically. “However, they were unable to denounce the bloody coup in Bolivia,” said Petro, who complained of a “crisis in Latin American journalism.”