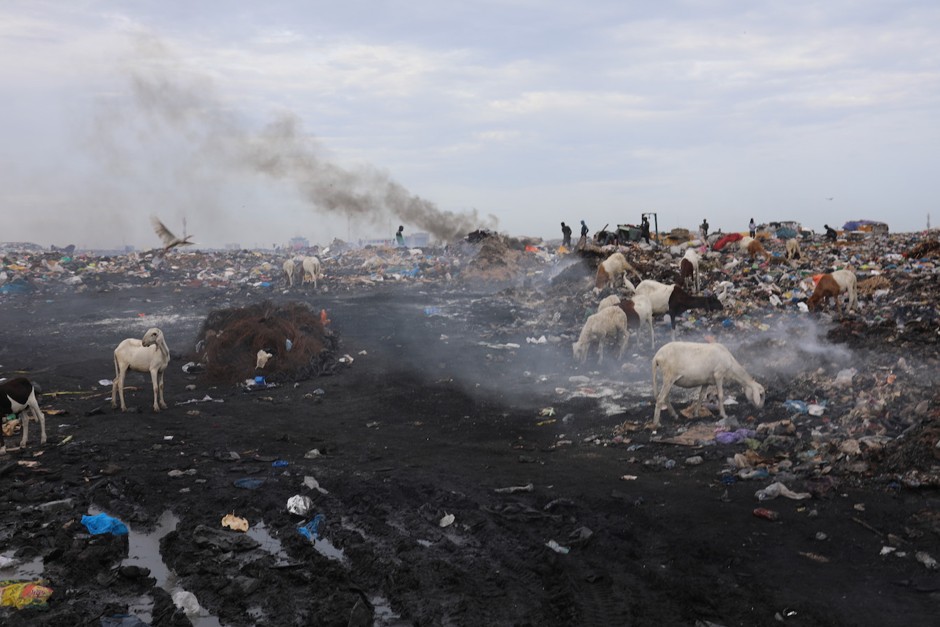 The Toxic Effects of Electronic Waste in Accra, Ghana

Sorting through used electronics is a livelihood for many in the Agbogbloshie area, but toxic e-waste poses serious health risks.

Heavy, acidic gusts of smoke billow across the Agbogbloshie dump, a wasteland dotted with burning mounds of trash in Ghana’s capital, Accra.

Up to 10,000 workers wade through tons of discarded goods as part of an enormous, informal recycling process, in what has become one of the world’s largest destinations for used electronic goods.

Burns, back problems, and infected wounds are common ailments among these workers, as well as respiratory problems, chronic nausea, and debilitating headaches—brought on by the hazardous working environment and toxic air pollution.

“When I was a small boy, I used to be a footballer—but not anymore,” said Abdullah Boubacar, a 28-year-old who moved to Accra from the northern Ghana town of Tamale in 2008. “I have stomach ulcers and I run out of energy very easily.” Boubacar spends his days smashing up old computers and televisions in search of valuable parts and burning insulated cables to recover copper.

The Agbogbloshie dump is a result of the world’s increasing demand for electronic equipment as consumers continually upgrade their devices and throw out the older ones. A significant proportion of this electronic waste is sent, often illegally, from the West to developing countries across Africa and Asia.

Around 50 million tons of electronic waste, or e-waste, is being thrown away each year, according to a report published this year by the United Nations. That figure is projected to double by 2050. At the same time, only 20 percent of e-waste is thought to be recycled appropriately. The rest “ends up in landfill, or is disposed of by informal workers in poor conditions,” the UN found.

The e-waste problem could expand into a global health crisis, largely affecting urban areas, if not addressed. “E-waste is a growing global challenge that poses a serious threat to the environment and human health worldwide,” said Stephan Sicars, an environmental director at the UN Industrial Development Organization.

In Ghana, the waste arrives via the Port of Tema, 20 miles to the east of the Agbogbloshie dump. Hundreds of thousands of tons of used electronics—mainly from Western Europe and the United States—are delivered in huge containers. They are often labeled as secondhand consumer products, health experts said, so they are not strictly considered waste. But their impact is noxious all the same.

“The workers … have to earn a living, so it’s a trade-off. They earn money but their health suffers.”

“There are skin diseases and ailments [at Agbogbloshie], but the worst problem here is respiratory illnesses, because the amount of pollution here is so high,” said Julius Fobil, a professor at the University of Ghana’s School of Public Health, who carried out a study of the health of e-waste recyclers between 2016 and 2018.

“In terms of particulate matter, the quality of air is terrible,” Fobil added. “The workers can’t do anything about it because they have to earn a living, so it’s a trade-off. They earn money but their health suffers.”

These health risks are entering the food chain. The Agbogbloshie area is home to one of the largest food markets in Accra, and haggard livestock roam freely and graze on the dumpsite. A recent report by environmental groups Ipen and the Basel Action Network found Agbogbloshie contained some of the most hazardous chemicals on earth.

One egg hatched by a free-range chicken in Agbogbloshie exceeded European Food Safety Authority limits on chlorinated dioxins, which can cause cancer and damage the immune system, 220 times over.

In total, about 80,000 men, women, and children subsist from the Agbogbloshie dump, living either on-site or in the adjacent slum. They are among the poorest of Accra’s 1.7 million inhabitants, many of whom come from the northern regions of Ghana and neighboring countries such as Niger, Mali, and the Ivory Coast.

Abdrahaman Daouda, 34, came to Agbogbloshie from Niger two years ago. “Unemployment was so bad, my father was embarrassed for me,” he said. “So I left my country.”

Some days, Daouda earns up to 40 Ghanaian cedis ($7.50) collecting used water sachets or scrap metal, but on others he earns nothing at all. When it rains, he says, it becomes more difficult to breathe, so he takes shelter in a shack that he shares with six fellow migrants from Niger. He hopes to save enough money to buy his own taxi one day.

Khraponuv: Voice of Democracy – from a safe distance

The feeling of nostalgia for one’s homeland, that expatriates around the world know so well, also appears to apply to fugitive criminals on the…