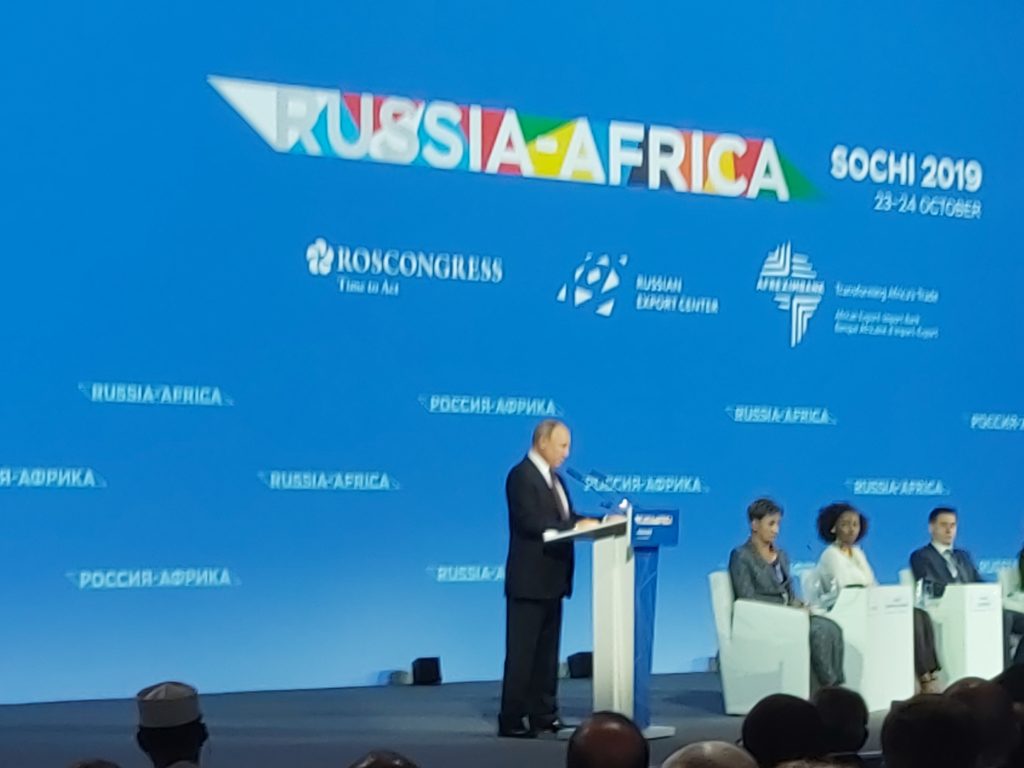 For quite some time already Russian businesses had an eye for Africa and also the Russian government launched an initiative for cooperation with African states in defining partnerships that go beyond the approach the US, EU and China are taking as the exchange of goods and opening their various markets can be seen as a new era of free trade in contrast to aggressive neo-colonial strategies other major powers had taken in the past 50 years.

President Vladimir Putin welcomed the leaders and CEOs of Africa to the first Russia-Africa summit in Sochi yesterday saying that Russian Federation will expand it’s presence in Africa.

Russia was offering systematic development assistance to Africa, he said, citing a mix of $20-billion debt relief, trade preferences, help in the fight against infectious diseases such as ebola and energy production, mainly nuclear, mining, and educational support, to showcase Russia’s commitment to the continent.

Russia is presenting the summit as a return to Africa, after a long relative absence following the collapse of the Soviet Union in 1991. In the Soviet era, Russia gave many African countries, including South Africa, substantial military, financial and political support in fighting colonialism and apartheid.

Preside Putin is now playing catch-up, seeking to make up lost ground in Russia’s relations with Africa, which has already established summit-level relations with many other countries and regions, including China, the European Union, Japan, Turkey, India and South Korea.

About 40 African heads of state and government, including South African President Cyril Ramaphosa and 2,000 companies, among them several from South Africa, are attending the economic forum and summit.

The economic forum is showcasing the economic opportunities which Russia has to offer the African continent. The summit to be held on Thursday will shift the emphasis to political co-operation.

“We are determined to increase our presence in Africa,” President Putin told the economic forum.

“We, of course, will support such plans from the state level,” he added, noting that the Russian energy companies Gazprom, Rosneft, and Lukoil concern were implementing promising oil and gas projects in Africa.

“Alrosa develops diamond deposits, Yandex is represented in the markets of a number of countries and helps African states solve information security issues and develop a digital economy.

Connecting the dots between Salisbury, Skripal poisoning and Syria chemical weapons hoax points to NATO collusion by Alex Christoforou     “The more this…