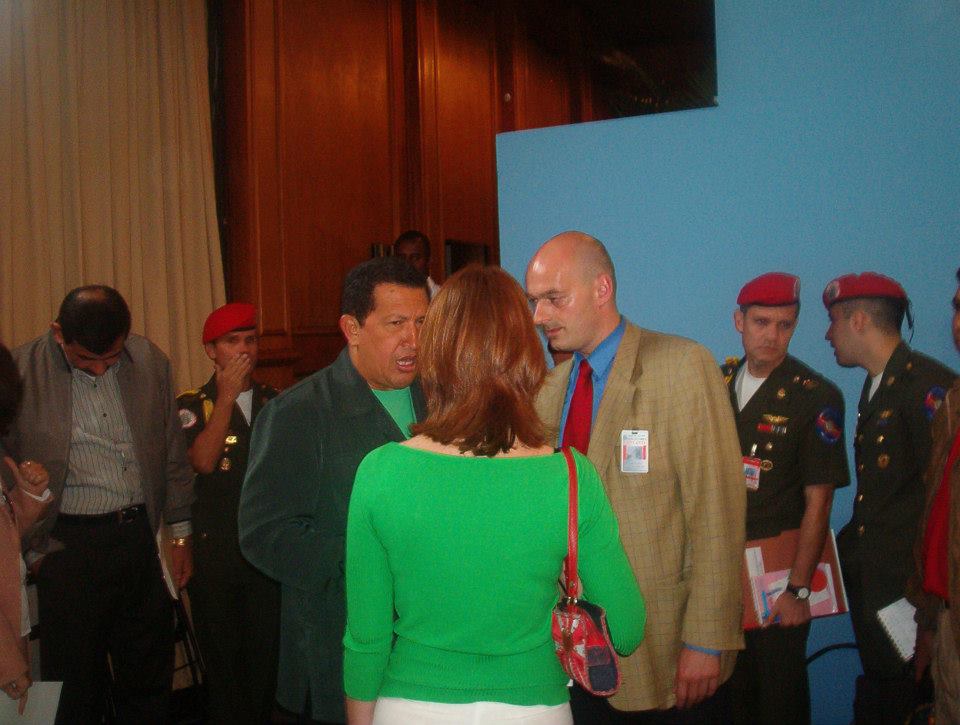 Venezuela is today, April 6, 2019, almost exactly 17 years after the coup of April 11, 2002, and six years after the death of President Hugo Rafael Chávez Frías, again in the crosshairs of the imperialist US oil power.

When my Irish colleagues were filming at the time that alleged Chavez- supporters apparently fired at the crowd of opposition demonstrators from a nearby bridge, what President Chávez immediately denied, it looked for a moment as if the revolutionary project of Bolivarianism, which at that time was not openly called socialist, failed.

Only an investigation months later could prove beyond doubt that the dead under the bridge could not come from pistols of Chavistas, because their range was simply too short, but that it had been sniper in a high-rise building behind it, whose identity is not unequivocally proven, but witnesses said they had heard English with American tongues.

It was intended to have the incident been reported with the help of this False Flag that this vile left-wing nationalist president was simply shooting at peaceful demonstrators. The justification for the coup and international ostracism was thus established.

The only reason the coup collapsed after 2 days was that more than 8 million people across the country took to the streets for Hugo Chávez and did not want to accept that the wheel of history should be turned back so easily.

As a president of a country like Venezuela, you have to have either the economy, the military or the people on your side. Hugo Chávez, although himself parachutist had the opposition-dominated middle and upper class, which had supported him half-heartedly in the 1999 election, because they thought he was just a Social Democrat who did not seriously posed a threat to them, but hand out a few benefits to the impoverished 80% of the population, get scared when he fired over 10,000 executives of the state-owned oil company PDVSA in just one day, when it became known that they were filling their pockets with a corrupt transfer pricing system using offshore Mailbox companies in Panama, awarding themselves Venezuelan oil contracts by 30% discount and selling those further on on the world market at the official price.

Chávez’s contestant in the 1999 election Enrique Salas Römer, a golfing partner of late US President George Herbert Walker Bush, frankly admitted to me that his class resented Chávez as he had dealt with them. After all, those oil managers he would later fire would have even given him $ 500,000 for the campaign, Salas Römer claimed.

Since then, and especially since the failed coup of April 2002, the tablecloth in Venezuela has been cut and Chávez has since been openly socialist, which has been well managed by high oil prices. It was disturbing that the middle class dominated the private sector, but it had almost come to an agreed division of power when the declining oil price and finally the sudden and early death of Hugo Chavez played into the hands of the opposition.

Morning air was thunderstruck when the Chavistas lost the majority in parliament. Successor Nicolas Maduro Moros had three times to follow into the footsteps of Hugo Chávez, because although being very competent, he is of course a different person and has a different charisma.

The economic crisis that the opposition is accusing the government of being responsible for because of mismanagement and corruption can also be seen as a result of the private sector holding back food and medicine while speculating on higher prices, but they have been also been able to push for sabotage in order to deliberately create bottlenecks, which are then blamed on the government.

The sanctions from the United States, which even limited money transfers through Western Union, so that many Venezuelans who were relying on such could not get any foreign currency hit the economy further.

Nevertheless, the strategy did not work out, because Hugo Chávez’s population, always prepared for such possible scenarios, looked through the game and otherwise manages the lack of product supply by a huge solidarity.

Since then, the desperate opposition has increasingly resorted to violent provocations, most recently in the case of denouncements by the self-proclaimed interim president, Guaido, who is now even regarded as a joker in the opposition camp.

US President Trump recognized him, German Foreign Minister Heiko Maas zealously practiced the transatlantic cleavage, although otherwise per se Trump is considered a foreign policy gambler because he wants to pull troops from Afghanistan and Syria, and even sent the German ambassador as escorts for Guaido.

This Saturday, April 6, 2019, Guaido called again for the storm on the presidential palace Miraflores but couldn’t even get anywhere near it as the pro Maduro demonstrations of the Chavistas were once more dominating the streets.

One has to expect further violent provocations to justify a US intervention, but here Guaido is likely to face a huge misjudgment, because unlike George W. Bush, Trump may be verbally brutal, but probably has no interest in the adventure and will not rush to Guaido’s rescue.

Trump’s eloquent brutality is more likely to be seen as a theater for his own hawks in Congress but also for media such as CNN and New York Times that push for intervention. Trump does not care too much about the wishes of the secret services, who, however, managed to drag Nobel Peace Prize laureate Barack Obama into the Syrian war with the help of false flag actions.

The bloody clashes between opposition and Chavistas will probably continue. A way out would be early parliamentary elections, which the Socialist Party is likely to win clearly this time, since the vast majority of people are fed up with the fact that the sabotage of power and water supplies many see owed to the Guaido-camp is paralyzing the country.

Of coincidences one no longer speaks seriously in opposition circles but calls it a necessary strategy.

The macroeconomic damage of the sanctions alone is estimated by the internationally respected economist Judith Valencia to 24 billion US dollars. In addition, seized assets of the 14,000 Citgo gas stations in the US belonging to the state-owned oil company PDVSA and billions of gold reserves frozen by the Bank of England have been seized in the USA.

In fact, it only provokes laughter when it is revealed that Guaido had been put on thin ice by a cabaret artist who had  himself identified on the telephone as president of the Switzerland and announced that Switzerland had frozen Venezuelan fortunes and would serve him as interim president. Gauido fell for it and immediately gave his account number.

History does not repeat itself, but once, as a tragedy, takes place another time as a comedy, it is said. If only it happened without the dead and injured!

So the pro-Maduro demonstrations get bigger every time and the Gauido ones get smaller. Luckily he did not continue to use violence today. He should contest a presidential election rather, then he would see if he can become president.

Merkel misses out at UN