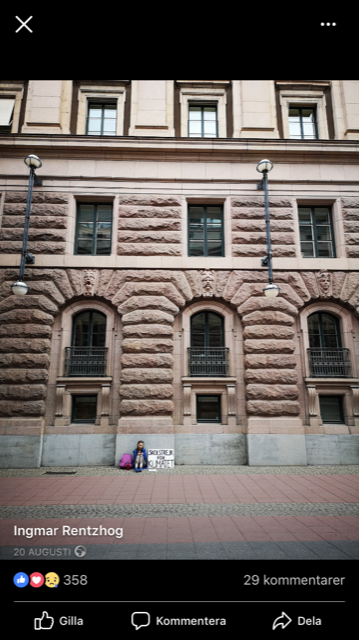 All teenagers can become famous if their parents have influential contacts

Nobel Peace Prize nominate Greta Thunberg outed herself, or have it been her parents and their sponsors (?!), as a pro-nuclear energy activist posting on facebook that nuclear energy could be an emission-neutral solution. Since the beginning of the climate change hype in January 2007 the EU Commission following instructions by EURATOM was empahiszing this point while neglecting the facts that there is no solution to the nuclear waste problem.

The latter has now probably been found by a 16 year old pupil in Sweden who many suggest should attend some more physics classes. 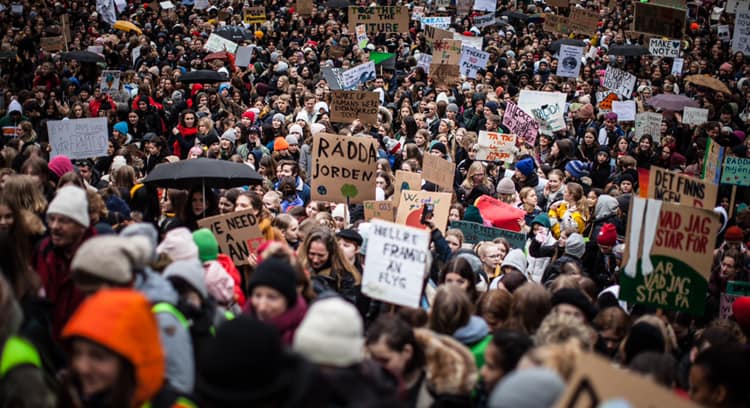 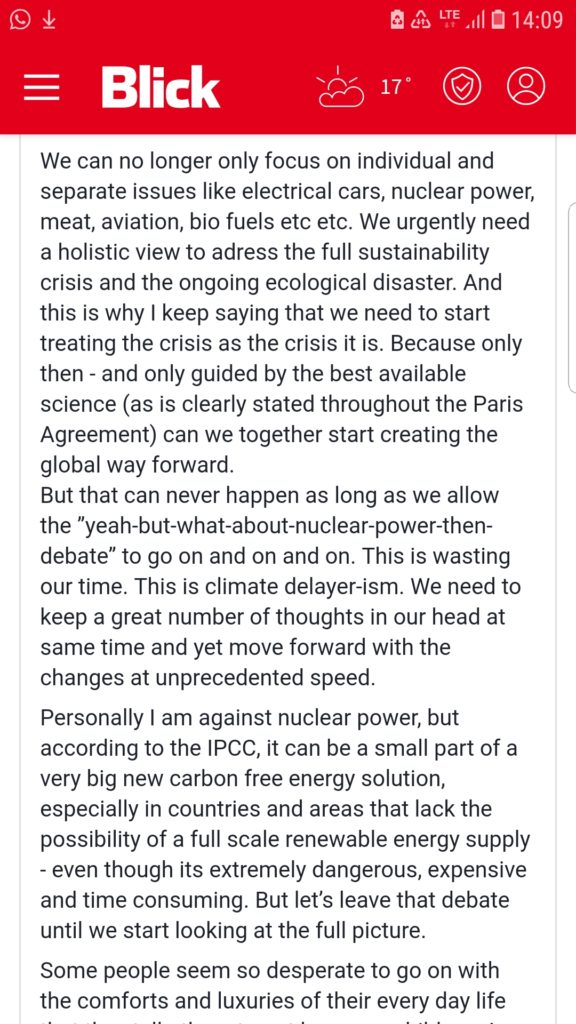 But, probably shocked by what many call a misinterpretation of her words, Greta Thunberg was hecticly rowing back reiterating that she “personally” was against nuclear power. Who if not she personally, one would be inclined to ask, or is that the nuclear PR machinery who use an innocent-appearing young woman letting her shrug her shoulders and saying, that she would not know whether nuclear power was in fact a possible solution? Personally against, but subtly the soundbite suggests that impersonally she might agree that nuclear power was emission-free of one liked it or not.

Whoever is writing or editing Greta Thunberg’s postings is very clever in making it deliberately unclear whether she is pro- or against nuclear power. She suggests to leave this complicated matter to the scientists to decide. That’s exactly what the nuclear mafia wants and in this sense Greta Thunberg’s shrugging of her shoulders served the purpose perfectly.

What a hoax! Those climate change protests suddenly pop up like mushrooms and raise the question whether this is an attempt to mask and prevent “Yellow Vests” from spreading. After all, there is nothing better than to complain about bad weather.

It smells a bit like the “Desperate Housewife” – scandal about bribery by upper class parents to pave the way for their breed into US ivy league schools.

One should wonder what kind of parents would exploit their children but the image we have in our heads are those of poor families in the so called “Third World” where children work and die in Congolese coltan mines.

But, Greta, standing soon as a nobel peace laureate in one row with Nelson Mandela, Mikhail S. Gorbachev and Barak Obama, may think by herself and very different. What if she, a teenager, revolted against her parents and their PR-firms?!

Whenever mainstream media in collaboration with multi billionairs of the kinds of Zuckerberg, Soros, Branson and Gates jump onto a bandwaggon one ought to be very sceptical.

Greta Thunberg fully supports the neo-colonial Paris Climate Change accord, she says, while one may doubt that she fully understood it’s consequences.

But, maybe her parents did?

This story has been investigated by swedish journalist Andreas Henriksson. As in a meritorious way, the entire PR machinery rolled up how an unknown 15-year-old with known parents in a few months managed to become a frontal figure for the climate movement. Without having done anything other than sitting alone with a hand-painted sign outside the “Riksdag”, the swedish parliament, a few days in August-September 2018.

On August 20, 2018, Greta Thunberg began her climate strike outside the Riksdag. Four days later, her mother, Malena Ernman, launched a book about climate change. The same day, the company “We don’t have time” put up a picture of Greta on their Instagram and Facebook accounts. It has been the company’s founder Ingemar Renzhog who posted the picture. 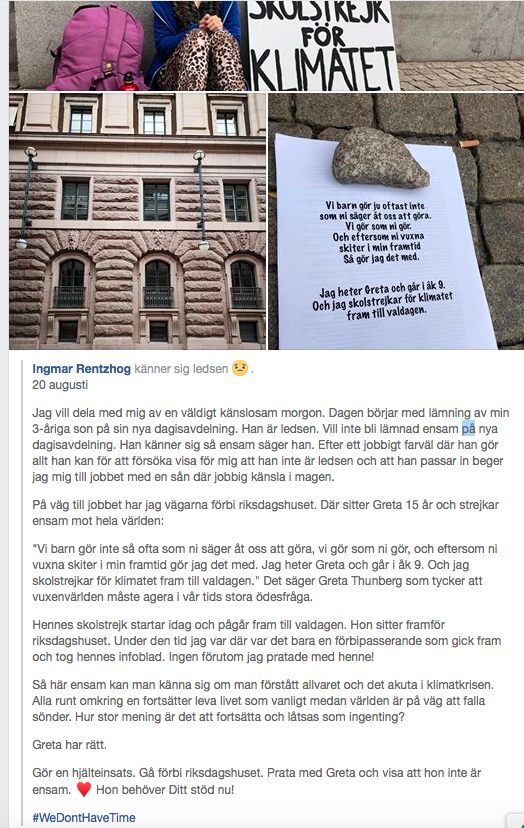 Andreas Henriksson revealed on his Facebook that Ingemar Rentzhog on the same day posted the following status, where he claims that he just passed by.

Swedish paper “Aftonbladet”, being tipped off by Mr. Rentzhog, published at 16.35 on the day the “school strike” started a picture and full page article on Greta Thunberg.

The article then started a chain publications that every newspaper kept on.

Dagens Nyheter published on August 23, 2018, a great interview with Greta’s parents about the new book, illustrated with great pictures of Greta and the school strike. 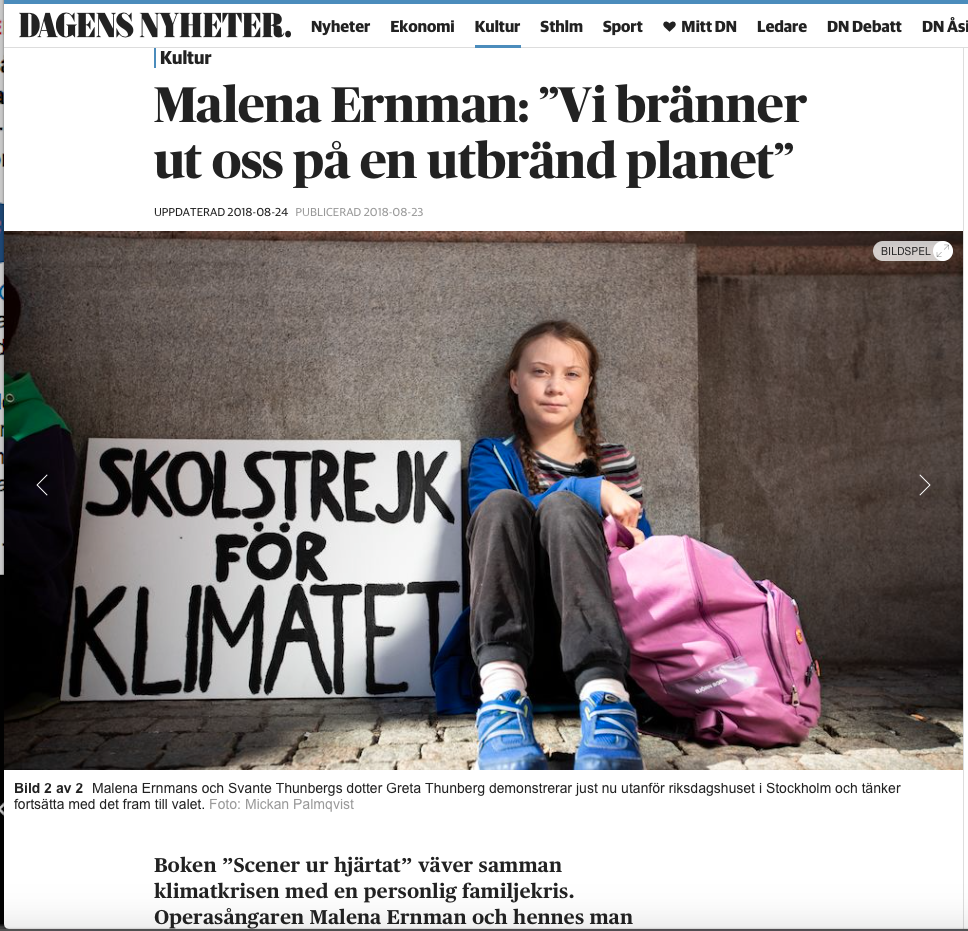 Rentzhog himself joint the strike on August 24, 2018 and posted the pictures on his company’s Instagram and Facebook pages. 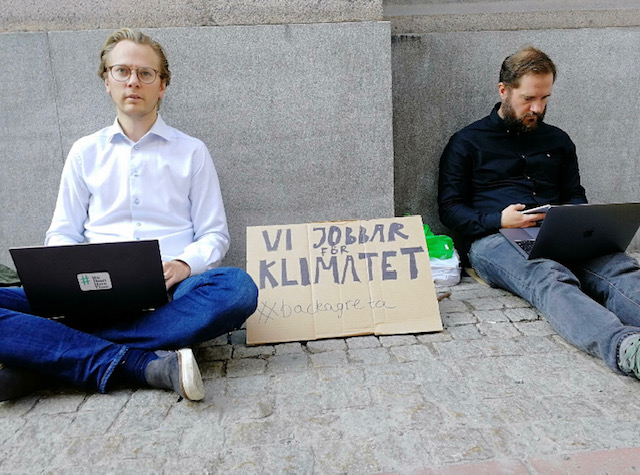 But this has not been Greta’s first public appearance. On May 20, 2018, she won the opportunity to publish in the Swedish Social Democrat’s SvD’s talent competition for debate articles on the climate for young people.

In 2017, Ingemar Rentzhog had started the company “We don’t have time AB”.

Shortly before, May 4, 2018, he and Malena Ernman, Greta Thunberg’s mother, were participants at the same climate conference – “The Climate Day”.

On September 2, Ernman authored an article with, among others, Rentzhog and Kristina Persson from “Global Challenge”.

First, Rentzhog denied everything, but in a Facebook thread he then acknowledged that he helped with PR. Henriksson put up this picture on his own page. The company also turns out to have been behind the school strike and the entire public relations around it. 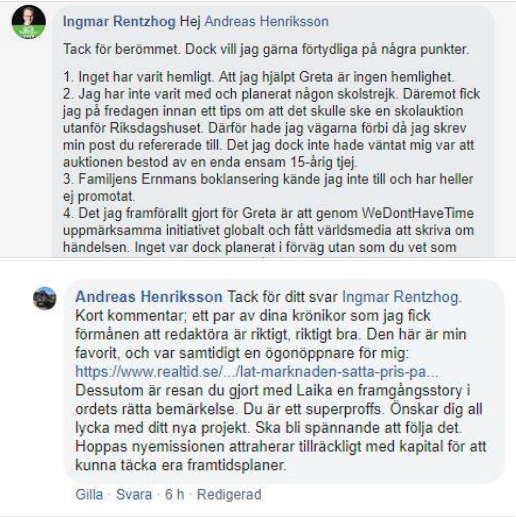 The campaign is also included in the PR material the company produced and which Henriksson found.

The company’s Facebook page is fascinating. They started since 2016 but seem to have had some activity only in autumn 2017 but today they suddenly have almost 500,000 followers.

How is this possible?

Well, there are different techniques for it actually. For example, you can buy fake or genuine followers. You can also buy Facebook advertising against a well-chosen target group built on the similar site online and by posting several posts a day by this also building up a page’s follower number. 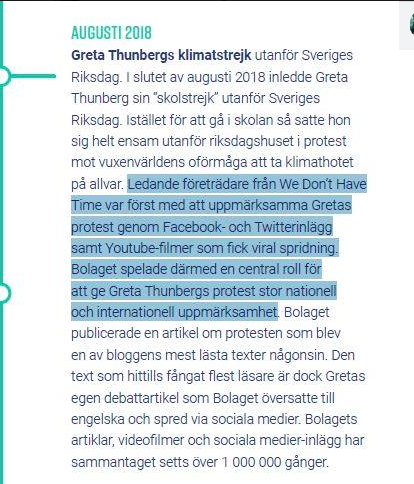 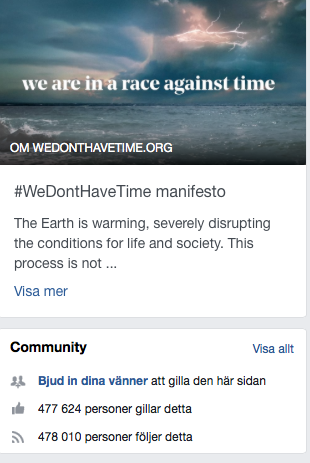 If you look at which ads the site runs, you clearly see that they have at least three ads that they run against a number of different countries.

In an interview on October 18, Rentzhog reported that his site has a reach of 18 million and that they grow by 10,000 followers per day. But cunningly, he does not use a single engagement measure. Because this is about micro levels. If you grow by 10,000 a day, you have added a great PR budget, and possibly bought help elsewhere as well.

On November 26, the newly launched company jumpstarted a campaign round in order to raise new capital. Perfect timing, after Greta Thunberg and her book were launched in August, and whose school strike Rentzhog ran PR campaigns for.

After the costs for the campaign have been paid, the maximum income is Swedish Crowns (SEK)16.6 million. 30% of these he intends to add to even more ads and marketing.

“Climate Change” may be the window dressing but Ingemar Rentzhog is going to make money. Thanks to Greta and the PR campaign, he has both managed to build up her brand and company. But the company’s followers consist of a large number of ads bought by advertisers who do not engage in any strike or virtual campaign.

Of course, it is good that the young generation is engaging itself politically and for such an important subject, but one should also open the student’s eyes and make them aware of exploitation by NGOs that have business interests.

We all have been young and I remember how I was sneaking out of school to join peace and anti-nuke demonstrations in the early 1980ies. I was keenly making sure that my parents would not notice anything. To the contrary, had they together with PR experts stood by me to march for world peace, I had probably not become a marathon runner.

One can only wish that Greta, not the teenage girl, but a young woman with her own head, will refuse to accept the Nobel Peace Prize and by this really live up to what mainstream media has already made out of her. Only then will she regain control of her life and tell her parents and sponsors to fxxx-off.

The penguins have deserved this noble act by a young woman and her followers. I bowe my head in respect for our children!

EU seems to have outdrawn Greatbritain A comment by Ralph T. Niemeyer It becomes clear now that the EU has become a trap for…