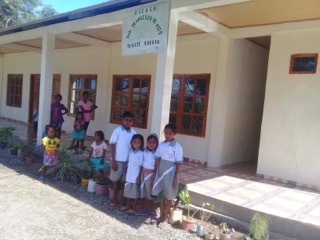 A truly remarkable humanitarian project finally got realised by a group of dedicated activists for the independence of East Timor who had the vision to found a primary school in the remote mountain region of Liquica, about 4 hours drive away by car from the capital Dili.

However, schools were only put in place in cities but not in the mountains were thousands of children were deprived of right their basic right to education.

This project has been mainly brought to life through the initiative and financial engagement by the retired school teacher Rui Chamusco from Portugal, humanitarian activist João Crisostomo living in New York, a timorese infrastructure expert Gaspar Sobral living in Portugal and his brother João Moniz (Eustáquio) who to a large degree is managing this project in East Timor.

The school opened it’s doors on 19 March 2018 for 53 pupils who are being taught by one single teacher in mathematics, portuguese and also music.

As always, funding is crucial for such humanitarian projects and readers are kindly advised to use the following account should they wish to donate so that the equipment and furniture that is currently still in Portugal ready for shipment can be delivered in order to expand the operations of the school which is at the moment only functioning with a blackboard and plastic chairs.

A Comment by Ralph T. Niemeyer   For many years, German public Sparkassen and Landesbanken had a bad reputation, as they were branded…