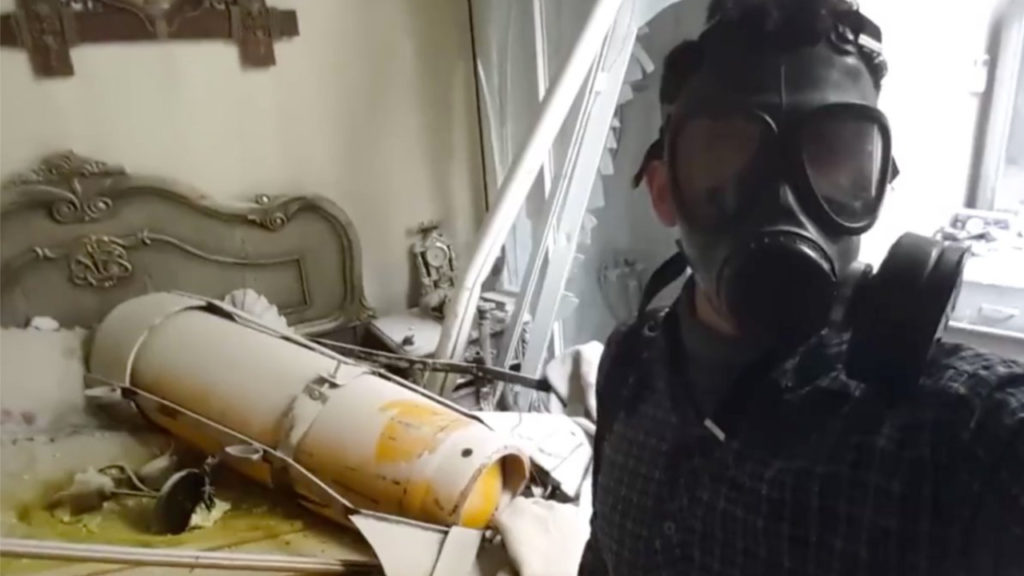 In any case, the warmongers of tabloids in western free democracies try to explain to us that a gas bomb has first torn a hole about two by four meters into a concrete pavement in order to then land fully decorative in a bed without paint scratches in order to spray poison gas there.

One may not understand nothing about propaganda like the one employed by western tabloids, or covert actions and false flags initiated by the deep state in order to carry a president as well as the citizens over the red tape making them cry out for revenge but one should apply one’s own senses and logic thinking when it comes to busting some reinforced concrete and steel, because that’s what is obvious.

And therefore one fails at the physics, if one tries to crack a relatively thin-walled container (editor’s note: presumably 3 – 4 mm, butane-propane gas cylinder) with ultra force by a reinforced concrete plate, in such a way that the reinforced concrete plate then breaks and the container is still intact, apart from the fact that the bomb must decide whether it is an unethical to Western standards air mine, so an explosive device, or a reprehensible inhuman poison gas bomb.

No matter what it shall be, one thing is clear these days: that nerve agents are being used only by Russian President Putin two weeks before his re-election and 3 months before the FIFA worldcup or Syrian President Assad days after US president Trump’s anouncement of troop withdrawl begging him to stay on in the moment Syria is finally getting liberated.

In the meantime word is on the street that the Skripals are being put on a CIA rendition flight, for their own’s sake, of course, and been hidden under new identities in the US. Probably that’s why the relative of Skripals was denied a visa to the UK: she would have stood in front of empty hospital beds.