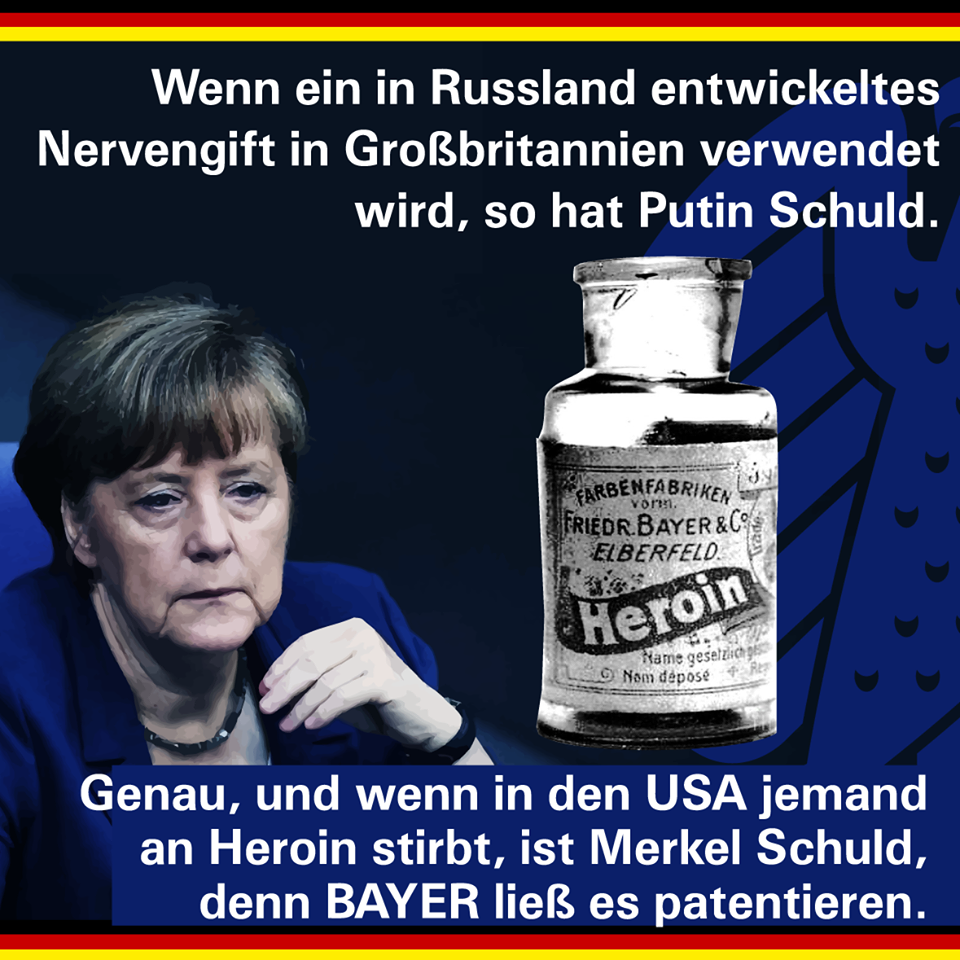 Logic: Heroin was developed in Germany so if someone dies in the US one has to blame it on Mrs. Merkel

Followinge British Prime Minister Theresa May’s logic the German state would be responsible for any casuality resulting from heroin abuse since the drug had been invented by BAYER in Germany.

Britain still withholds important details about the Skripal poisoning and gives no insight into the results of its investigation.

However, according to the Russian embassy in London, the director of the British military laboratory in Porton Down has in fact admitted with his recent statements that new toxins are being developed there.

The spokesman for the Russian Embassy pointed out that the Head of the Center for British Chemical and Biological Research in Porton Down, Gary Aitkenhead, had in fact admitted by his remarks that the country was developing novel toxic substances.

The lab is located just a few miles from the crime scene in Salisbury. Mr. Aitkenhead had stated that the security arrangements in Porton Down would not allow “something to leak through (outside) the four walls of the (research) facility.”

“We have also paid attention to the words of the laboratory manager, and in this way the British side has in fact admitted that this secret facility is developing and investigating new components of chemical warfare agents.

It is also noteworthy that Aitkenhead has not denied possession of chemical weapons stocks, including the substance A234, which was used according to official information from the British side to poison the family of Skripal (…), “said the embassy spokesman. This was not the first slip of the tongue.

Already on March 19, British Foreign Minister Boris Johnson said in an interview for Deutsche Welle in a rather ambiguous statements that Great Britain had such substances.

Relations between Russia and the UK have deteriorated dramatically in the context of the Salisbury incident, where ex-Russian military intelligence officer Sergei Skripal and his daughter Julia were found unconscious.

The attackers, whoever they were, left a trace like a horde of elephants, just like in the Litvinenko-case where pulonium played a role which was traceable up to the German city of Hamburg but not to Russia.

Was it not such a serious attack threatening the lives of at least 3 persons one could joke about in a way of a “Mr. Bean” – conspiracy inadvertendly poisoning the German chancellor on his first mission as secret agent 000.

In the UK, the double agent of British intelligence agencies and his family members was granted asylum after being exchanged in 2010 for unmasked Russian spies. After the delivery of Skripal and his daughter to a hospital, the doctors found that the two were victims of a neurotoxin and are currently in coma.

London accuses Moscow of being involved in the attack because, according to experts, the toxin was of Soviet origin. Russia resolutely rejects the allegations.

In fact, since 1999, the United States and the United Kingdom have also had nerve gas Novichok, which was removed from Uzbekistan.

The military lab in Porton Down is not far from the city of Salisbury.