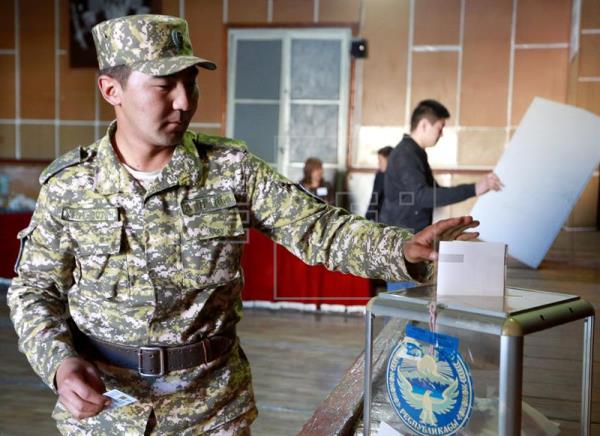 In the Europe Union and the United States controversy rages over manipulation of voter data, the release by foreign powers of compromising hacked e-mails, and the use of social media to disseminate ‘false news’ during election campaigns.

The Central Asian Republic of Kyrgyzstan, which held its first competitive Presidential elections on October 15th this year, is facing up to the fact that the ballot appears to have fallen victim to the same tactics.

An investigation by Kyrgyz news outlet Kloop following the leak of leaked a video and forensic information about a fraudulent “voter management system” by an activist with the nick name “suppermario12” revealed that a voter data management system run on a website called Samara.kg and operated by the campaign team of winning candidate Sooronbai Jeenbekov was for several weeks hosted on a government server. The same server is used to run Kyrgyzstan’s e-government network and contains detailed and private information on around two million people.

Kloop’s findings were confirmed by Swedish IT security experts Qurium, who state that Samara.kg was indeed registered on a government server from September 13th to October 13th, the most crucial period of the campaign.

Qurium were able to obtain hard evidence that Samara was using the government server, including:

This suggests that either a government employee gave Samara access, or that the server was hacked.

The State Registration Service insists that none of its systems were hacked over the past month.

“What we have shown is that government servers that process and handle the data of citizens of Kyrgyzstan … was hosting an election campaign website that was collating similar data,” Kloop.kg chief editor, Eldiyar Arykbaev, told EurasiaNet.org.

A key accusation made by suppermario12 is that the voter registration system hosted at samara.kg was intended to be used in order to intimidate voters. “By being able to check this system, they will know for whom they voted on October 15 and in case of not voting for the pro-government candidate they will be threaten to be fired from work or expelled from the school,” the activist, whose identity remains unknown said.

The outcome of the election was that candidate Sooronbai Jeenbekov, a former Prime Minister who had the backing of the ruling Social Democratic Party, somewhat unexpectedly won the October 15th ballot with a sufficient majority (54%) to avoid a second round of voting. He will be inaugurated on December 1st.

The election attracted further criticism from the Organisation for Security and Co-operation in Europe (OCSE).

Azay Guliyev, leader of the  OCSE election-monitoring mission, said in a statement that “cases of the misuse of public resources, pressure on voters and vote buying remain a concern.” Media bias was also reported by observers.

Of greater concern was threat of imprisonment delivered to  independent candidate and former Prime Minister Omurbek Babanov during a televised debate with Jeenbekov, and the arrest of number of his Babanov’s supporters before the vote.

Babanov was born in Kazakhstan and is half Turkish. This, and the fact that his wife is Kazakh, was used in a defamatory way against him during the campaign.

“There is a line between what constitutes normal (if uncomfortable) electioneering practices — such as gathering information about potential voters in order to target a campaign’s activities — and collusion between the state and a specific candidate”, reported Catherine Putz in The Diplomat.

The State Registration Service has now announced that it is to take legal action against Kloop.

In December 2015, following a request from the State Agency for Communications, Kloop was disconnected from its servers. The site had often reported on government corruption, as well as other matters that were traditionally  ignored by other media. Service was restored two days later after Kloop successfully argued that the Agency had acted illegally, and it is understood that they have now moved their servers abroad.

In addition to being a news outlet, Kloop is a web portal and a media school in Bishkek that provides both training and a platform for young journalists to publish their work.

The substance used on Sergei Skripal was an agent called BZ, according to Swiss state Spiez lab, the Russian foreign minister said. The…