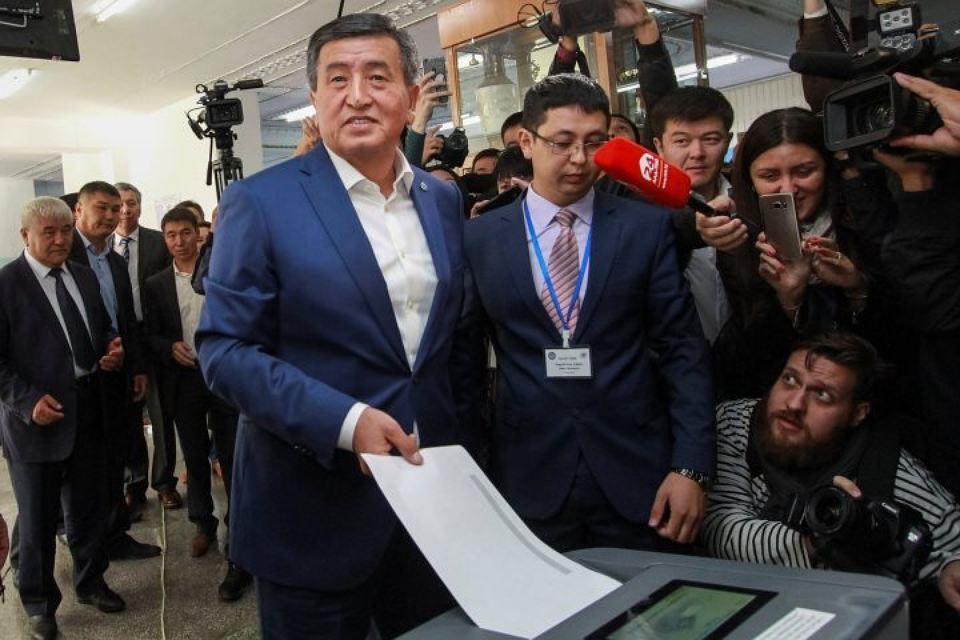 On November 9th the High Representative of the Union for Foreign Affairs and Vice-President of the European Commission, Federica Mogherini, paid a visit to the Republic of Kyrgyzstan where she held talks with President Almazbek Atambayev and President-elect Sooronbay Jeenbekov.

The HR/VP discussed with the leaders the Presidential elections that were held recently, which will result in the first constitutional transition of power from one elected President to another in the country,” the EEAS reported.

Unfortunately the head of European diplomacy failed to use this visit to address the rapidly deteriorating situation within human rights and freedom of speech in Kyrgyzstan.

“Kyrgyzstan is turning into a police state”, human rights activists are increasingly claiming.

Mass arrests, prosecutions, lawsuits against independent journalists and opposing leaders, and carefully concealed corruption scandals involving the rich and powerful are constantly being reported in the Kyrgyz media.

Hoping to retain power through his successor Sooronbay Jeenbekov, the outgoing President of Kyrgyzstan Almazbek Atambayev appears to have crushed all opposition.

Polarisation of the people into “friends” and “enemies” appears to be a feature of the political behaviour of the Kyrgyz leadership. The eight year prison sentence handed down to opposition politician Omurbek Tekebayev, the leader of the Ata-Meken (Fatherland) party, is a striking example of this.

The party has alleged that the government launched a case against their leader in an effort to stifle dissent ahead of the October 15th Presidential election, and to keep Tekebayev off the ballot.

Both Tekebayev and President Almazbek Atambayev were members of the interim government that came to power after a popular revolution ousted authoritarian President Kurmanbek Bakiyev in 2010.

But the Ata-Meken party strongly opposed a referendum on constitutional changes that were passed in December with a strong push from Atambayev’s office, and as a result Tekebayev called last year for the President to be impeached.

One week ahead of October’s Presidential elections, Kyrgyz state security service arrested opposition lawmaker Kanat Isayev on suspicion of involvement in a “violent seizure of power”.

The fact is that Isayev is a close associate of the leader of the popular Republic party Omurbek Babanov, the main opponent of the already elected Sooronbay Jeenbekov.

The Kyrgyz Prosecutor-General’s Office in a statement issued on November 4th accusing Babanov of hate speech and publicly calling for the overthrow of the government.

Kyrgyz prosecutors accused Babanov and other unidentified individuals of “stoking ethnic, racial, and religious hatred” and “publicly calling for the violent change of the constitutional order.”

They said Babanov attempted to curry support from ethnic Uzbeks on the campaign trail by discussing alleged discrimination and inequality they face at the hands of Kyrgyz authorities, “after which he called for them to actively fight against this situation.”

In the run-up to the elections President Atambayev made several harsh statements against Mr. Babanov.

“I am going to start my fight against corruption with you,” Sooronbay Jeenbekov also snarled at the opposition candidate Babanov in a televised debate shortly before the elections.

Arrests and elimination of political opponents became commonplace during the presidency of Atambayev: fabricated allegations have become a norm in Kyrgyz politics.

There are numerous examples. The Observatory for the Protection of Human Rights Defenders has been informed by reliable sources about the judicial harassment of Ms. Cholpon Djakupova, President of the Adilet Legal Clinic and a former Member of Parliament.

In August a court in Kyrgyzstan ordered the closure of the private TV channel “Sentyabr” (September) after ruling that it broadcast extremist content.

Journalists from the news website Zanoza.kg have also been hit with absurdly high judgments obliging them to pay thousands of euros in damages to Atambayev for criticising him.

The Bishkek district court ruled in favour of a lawsuit brought by President elect Jeenbekov against the 24.kg news portal and journalist Kabay Karabekov. In its decision issued on 5th October 2017, the court ordered each of the defendants to pay €62,000 in compensation to the candidate.

This lawsuit concerned an article that Karabekov authored, and which 24.kg published in September, which reported on President Atambayev’s visit to Russia.

The article suggested that a major purpose of the visit was to discuss prospects for the Kremlin’s future cooperation with Atambayev-endorsed Presidential candidate Jeenbekov, and it referred to issues that may influence this cooperation, such as alleged ties between Jeenbekov’s family and Arabic organisations deemed “extremist” in Russia.

Jeenbekov went ahead with the lawsuit, although 24.kg had removed the article from its site at his request.

Defamation claims against the media by the incumbent President and some candidates had an adverse effect on the public debate, and resulted in self-censorship among journalists.

Summarising, in the hope of consolidating power, the regime appears to be going rogue.

The democratic opposition hopes that the European Union will apply pressure on Kyrgyzstan.

Although the EU has limited influence in Kyrgyzstan, it is important to understand that this post-Soviet country can only become a more reliable partner when it develops and respects the rule of law.

The EU might apply a combination of aid, conditionality and political engagement in encouraging positive change in Kyrgyzstan, and the recently started negotiations on a new bilateral agreement between the EU and Kyrgyzstan should also be viewed as a window of opportunity to encourage Bishkek to adopt democratic reform.

Geo-politically the mutated Covid-19 hoax plays perfectly in hands of EU By Ralph T. Niemeyer, a conspiracy theorist par excellence Now, if there has…