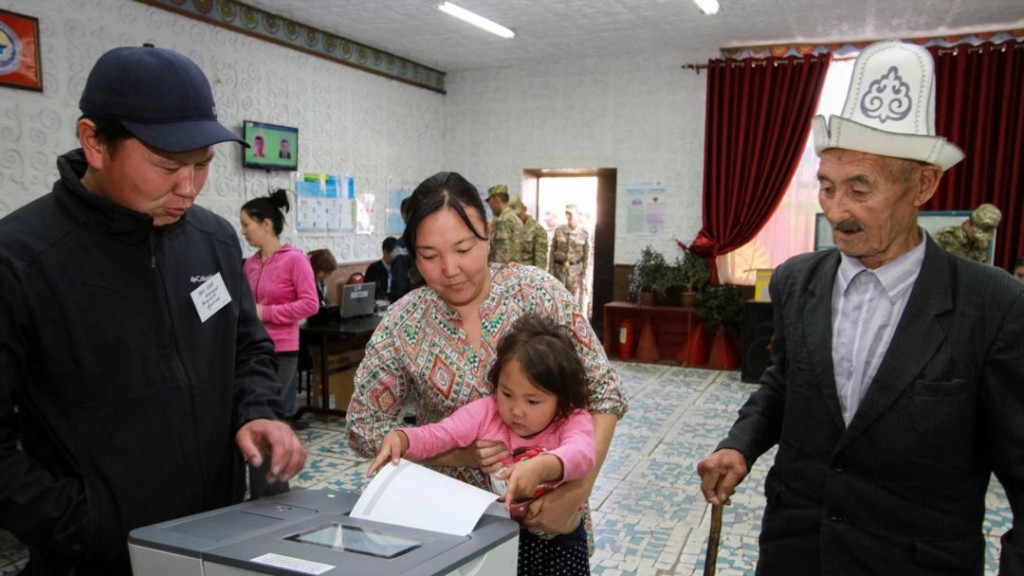 Kyrgyzstan’s recent Presidential elections started as a genuine democratic electoral process – indeed the first truly competitive election of its kind in the Central Asian nation – before descending into a debacle of administrative squabbles.

Outgoing President Atambayev, using administrative resources at his office’s disposal, brazenly promoted his protege – Sooronbay Jeenbekov – with the situation being aggravated by the efforts of Kazakh fugitive oligarch Mukhtar Ablyazov to influence the elections.

According to the preliminary conclusions of the International Election Observation Mission (IEOM), elections were competitive and well administered. Meanwhile the IEOM identified nevertheless shortcomings such as vote buying, pressure on voters, restrictions on media freedom and the use of administrative resources.

“The IEOM received credible reports of widespread abuse of public resources and pressure on voters, as well as of vote-buying. Furthermore, the elections were held concurrently with several criminal cases against opposition politicians or others supporting one of the main candidates” the report concluded.

The election campaign was generally conducted in a peaceful manner, however it did became more confrontational as election day approached, and the IEOM received credible reports of misuse of public resources.

Despite an electoral law banning the participation in election campaigns of certain individuals, including public officials, President Atambayev made several statements in favour of Mr. Jeenbekov:“On 9 October, following the death of Deputy Prime Minister Temir Dzhumakadyrov, in a traffic accident, and during the 12 October visit to Osh, President Atambayev made several harsh statements against Mr. Babanov. This altogether challenged paragraph 7.6 of the 1990 OSCE Copenhagen Document”, the report emphasised.

Following the October 15th poll, Jeenbekov was to emerge as winner, taking 54.74% of the vote. Former Prime Minister Ömürbek Babanov came second with 33%, having been expected by many internal and external observers to have done  somewhat better.

Support of the state-owned media, use of compromising evidence, and harassment from the secret services may have had a strong influence on the vote.

The aforementioned Kazakh billionaire Mukhtar Ablyazov, who is accused of creating an organised criminal group, as well as multi-billion dollar theft from BTA Bank, and who himself has political aspirations, has previously tried to interfere in Kyrgyz elections.

Last year Ablyazov, in an interview with Liberation (France) newspaper, confessed that in 2005 he financed the revolution in Kyrgyzstan.

“In early 2005, I financed the opposition there to contribute to the fall of the regime in Kyrgyzstan. It was important for me in order to launch democratic process in one of the former Soviet republics and they to be able to carry out proper reforms, which would become a model for Kazakhstan,” Mukhtar Ablyazov admitted.

On his Facebook page, Ablyazov published copies of Babanov’s letters asking for support. He also made a statement and several comments against the presidential candidate Babanov.

Reports indicate that the fugitive oligarch has suggested that Babanov is a Kazakh “project”, who, upon coming to power, will serve the interests of Kazakhstan.

There is one important reason why Ablyazov is so actively trying to influence the minds of the people of Kyrgyzstan.

As is attested by the courts of a number of countries, from Kazakhstan to the UK, his activities in Kazakhstan’s BTA Bank, of which he was main shareholder, were criminal, and he held assets which were frozen by the courts, and which were partially returned to Kazakhstan.

In Europe, it is now virtually impossible for him to find business associates: Kazakhstan, Russia and Ukraine want to put him before the courts, and Kyrgyzstan may be one of the few places still open to him for business.

Ablyazov tries to play the role of human rights defender and successful businessman: such a facade might indeed impress the average good citizen of Kyrgyzstan, where the average salary is 189 dollars, and the government is not primarily occupied with economic reforms, but with the restoration of the country from a second revolution.

Ablyazov would like to become a Kyrgyz Saakashvili – the ground breaking populist leader of Georgia who so successfully broke with the Soviet past to reform his country’s economy – and to take up a position in Bishkek.

In Kyrgyzstan Ablyazov has a certain influence, but also a dubious past in that country’s banking sector.

Kyrgyz financial law enforcement officers reported that they had filed criminal charges against Ablyazov for having received a credit under his own name for a sum “exceeding 200,000 US dollars” from BTA’s Kyrgyz subsidiary for him to be used “at his own discretion” thereby “abusing the trust of subordinates” and never intending to return the money.

In 2013 it was reported that he had obtained a fake passport registered to another person in Kyrgyzstan. The head of Kyrgyzstan’s State Registration Service, Erlan Saparbayev, said that the document for one Nurdin Osmonov was issued to Ablyazov by the Passport Office of Alamedin region in Chu oblast. The passport had the ex-banker’s photo. Ablyazov is also alleged to have received another passport.

Kyrgyzstan is rich in resources, ranging from water to uranium and gold, some of them having long been placed in the hands of foreign investors. But huge wealth still remains in the hands of the state or local businessmen.

And there is no guarantee that Ablyazov’s activities, particularly his attempts to exert influence over the democratic process in Kyrgyzstan, represent anything more than a desire to take over, directly or indirectly (through controlled individuals), Kyrgyz wealth.