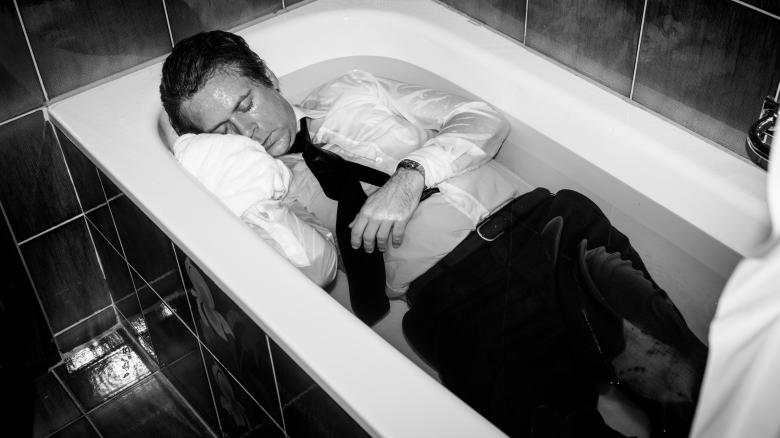 The discovery of Uwe Barschel dead in the bathtub of Room 317 of Geneva’s swank Hotel Beau-Rivage on October 11, 1987, brought to close the career of one of West Germany’s most promising young politicians. It also began one of the most sensational unsolved mysteries in recent German history, involving corruption, dirty money, international espionage – and murder.

Hardly more than week before two journalists found the 43 year-old Barschel’s lifeless body, fully clothed and half-submerged in the tub, he had resigned his post as governor of the German state of Schleswig-Holstein, which he had held since 1982. His tenure was widely regarded as a success, and he was one of the rising stars of the center-right Christian Democratic Union (CDU), then in its salad days under the chancellorship of Helmut Kohl. Yet Barschel’s resignation came amid a burgeoning scandal involving dirty money and spying on political rivals. Two investigations into the matter, known in Germany as “Waterkant-Gate” in emulation of Nixon’s downfall, later determined that no blame could be officially placed on the now-dead Barschel.

The circumstances of his demise were odd, to say the least. As scandal engulfed his career, Barschel made off for Gran Canaria to get away from it all, then headed for Geneva, though exactly why was never clear. His widow – who like the couple’s four children has insisted for a quarter-century that Barschel was murdered – claimed he had compromising material with him: papers, pictures, and the like, which could prove embarrassing to his enemies. Strictly speaking, the cause of death was never in doubt, as Barschel’s body, found oddly clothed in the bathtub, was a walking pharmacy, including a half-dozen drugs, among them heavy barbituates, antihistamines, sleep aids, and the like.

But from the beginning there were reasons to suspect that Barschel was not a suicide, besides the protestations of his family. There were indications that one or more persons other than Barschel had been in the room around the time of death, things were tossed about, and the position of the body seemed odd for a suicide. In November 2010, the family’s doubts – and over two decades of rumors – got scientific backing when the respected Swiss toxicologist Hans Brandenberger, an expert witness in many criminal cases, concluded after long examination that Barschel indeed had been murdered, citing the fact that some of the drugs found in the room and/or the body were virtually impossible for a normal person to obtain, and the likely force-fed cocktail was an almost ideal death combination to kill quietly. This, he concluded, was a professional hit.

Yet who wanted Barschel dead? Certainly he had political enemies back home, but the complexity of the crime scene, coupled with Barschel’s odd movements in the days before his demise, pointed to international, not domestic, intrigue. Not to mention that German politicans had not been in the habit of knocking each other off since 1945. Barschel’s large number of trips to East Germany was of interest to West German intelligence, and in later years evidence emerged that Barschel had some sort of relationship with the Stasi, the DDR’s infamous State Security, but no evidence has ever come to light pointing to Stasi involvement in his death, neither has any motive for the DDR to kill Barschel been apparent.

Rumors swirled for years, particularly around hush-hush international arms smuggling through Schleswig-Holstein in the mid-1980s which even Barschel’s family seemed aware of, but there were few solid leads until the mid-1990s, when Victor Ostrovsky, the onetime MOSSAD operative, claimed based on personal knowledge that Israel had taken out the West German politician. Ostrovsky’s 1995 book The Other Side of Deception, actually his second memoir account, expounded at length about the secret struggle between Iran and Israel back in the 1980s, including secret weapons deals involving West German spies and politicos.

Ostrovsky’s credibility has always been an open question, since his written works contain a jumble of information, some true, some exaggerated – much of it seems to be MOSSAD hall-gossip – some possibly made up altogether. Yet two things have never been in doubt. Ostrovsky has been treated as a major state enemy by Israel, his former employer.

And Ostrovsky’s account of Barschel’s assassination was very detailed and seemed to jibe with what investigators had found at the crime scene, as well as the family’s recollection of events. The former spook now runs an art gallery in Arizona and sticks by his story.

Ostrovsky described a complex kill operation, with at least some awareness by the BND, the German Federal Intelligence Service, in which MOSSAD lured Barschel to the Hotel Beau-Rivage where he was sedated, then force-fed a complex drug cocktail, and eventually a heart attack was induced. As for motive, Ostrovsky claimed that Barschel had put his foot down and stopped allowing the Israelis to use ports in Schleswig-Holstein for the secret shipment of arms to Iran as an extended part of the soon-to-be-infamous Iran-Contra debacle. Israel first discredited Barschel, engineering the scandal which undid his career, then killed him off.

The ex-MOSSAD operative’s account got backing from a 1995 investigative report in the Washington Post, which reached complimentary conclusions, and led Israel to offer a relatively weak denial that it had any involvement in Barschel’s death (MOSSAD never comments on its more unpleasant activities, but some denials have been stronger than others). Questions about Israeli involvement in the case have lingered since the mid-1990s, without much more evidence to prove, or disprove, Ostrovsky’s shocking claims. The German detective leading the investigation then concluded it was likely murder, not suicide, but there was insufficient proof to back that up.

In mid-2011 German police announced that the cold case was being reopened, in light of Dr. Brandenberger’s report, with the hope of finding new evidence to finally establish what really happened to Uwe Barschel. Last week it was reported that new evidence has indeed come to light, including DNA data which may establish who, other than the victim, was in Room 317 that fateful night a quarter-century ago. Fingerprints and DNA information have demonstrated that Barschel was not alone in the last hours of his life. German media has increasingly pointed fingers at the MOSSAD, and the case is again front-page news.

Certainly MOSSAD’s assassination in January 2010 of HAMAS higher-up Mahmoud al-Mabhouh in Dubai, using a complex drug cocktail to sedate the victim before killing him in a manner made to appear like a natural death, seems to have caused German investigators to wonder how long Israeli hit teams have used such methods.
Additional information cannot be expected soon from the German authorities. It is highly unlikely that by the 30th anniversary of Uwe Barschel’s untimely death, we will know what really happened and the mystery can be solved once and for all.

Interview with Ralph T. Niemeyer, witness of the “Barschel-affair” in 1987, English translation below:

Following an interview with Ralph T. Niemeyer, once youngest German journalist interviewing Chancellors Helmut Schmidt and Helmut Kohl at the tender age of 13, bringing him very close as a witness to the so called “Barschel-Affair” in September 1987. The interview has been published by internetz-zeitung.eu (IZ) in February 2016 and was conducted by IZ – editor Jürgen Meyer.

In the footsteps of Nelson Mandela

Today’s Africa is lacking leaders like late President Nelson Mandela, that is for sure. Nevertheless there are a few who follow his…