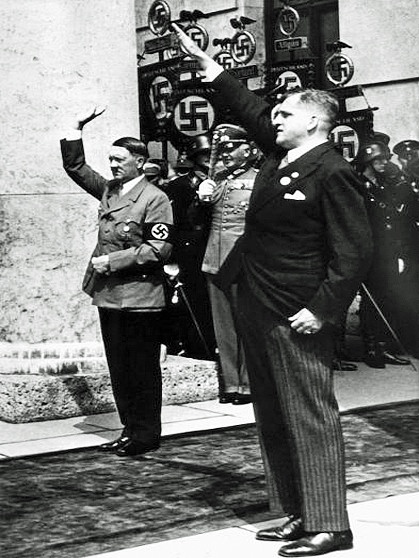 It is widely anticipated that right-wing Alternative für Deutschland (AfD), a partly neo-fascist and racist Euro-critical party, will win votes well above the 5% minimum threshold guaranteeing parliamentary representation in the German Bundestag for the first time. So far, the party founded by economic professors who opposed the European Stability Mechanism and the Euro, is only represented in German federal state parliaments in Saxony, Saxony-Anhalt, Brandenburg, North-Rhine-Westphalia, Saarland, Baden-Württemberg and Schleswig Holstein as well as the European Parliament.

In the latter, front-woman Beatrix von Storch (MEP) made headlines by calling for a barbed wire guarded border to protect against the influx of refugees and when being asked whether she would support the use of a gun to enforce the border regime she said yes in a twitter chat and also fell not short of saying “yes” to ultimately shoot at women and children.

There was considerable outrage in the German public that remembers the barbaric border that seperated East- from West-Germans for more than 28 years until 1989 quite well and still bemourns the victims of the East-German border police shootings at the Berlin Wall every anniversary.

And, her even more popular party foe Bernd Höcke, parliamentary whip in the state of Saxony, called frequently for stopping to commemorate the holocaust citing the Berlin holocaust memorial near the landmark Brandenburg Gate “a shame” in that sense that it should not be there. His colleague, the parliamentary leader of AfD in Brandenburg Alexander Gauland ascerted just days ago that “Germans should be proud of the achievements of the German Reichswehr during two world wars like the French were proud of their emperor and the English of Nelson and Churchill”.

But, all this although even these scandals can not harm the rise of the party on which German mainstream media is reporting, although often with a warning underlying tone, at full scale thus making it popular for voters disenfranchised with the christian-conservative-social-democratic coalition government of Chancellor Angela Merkel. Logic of German voting patterns always went this way: the more media is warning of so called protest parties of the extreme right-wing, the more votes are being collected. Only the leftist parties are being widely ignored. None of the German private or public media dares to warn of Leftists, only in a way to discredit same.

Much of the German’s anger about social injustice and threats of poverty for elderly and children in the EU’s richest member state results directly from Social Democratic-Green governments under Chancellor Gerhard Schröder from 1998 until 2005 during which the German labour market-liberalisations along with social-, tax- and pension reforms collectively known as “Agenda 2010” as that led to a wage and standard dumping had been executed enhancing an aggressive export strategy that destabilised the rest of the EU.

Many Germans feel left behind, a bit like the core voter base of US-President Donald Trump who couldn’t engage themselves anymore with the mainstream politicians of neither GOP nor Democrats as the establishment of these parties like Mrs Merkel’s Christian Conservatives and junior coalition partner the social democrats (SPD) had abandoned them a long time ago. SPD candidate for chancellor Martin Schulz did not manage to ignite any enthusiasm for long as his self-criticism that broke with taboos was widely welcomed but was not followed up by any concrete steps and an rather vague election program that fell short of breaking with former Chancellor Gerhard Schröder’s neo-liberal agenda 2010 that can be seen as the re-birth of socialist – leftists among Sahra Wagenknecht and the ultra-right wing populists of AfD.

But, not only media actively helped the xenophobic movement rise, but also well-known financiers such as August von Finck, heir of Mövenpick group and the Bank Merck, Finck & Co, which took over Jewish banks such as J. Dreyfus & Co or Rothschild during the NAZI-regime, grant their financial support to AfD.

The respected NGO “Lobbycontrol” writes that shell companies and foundations are being used in order to hide the flow of funds  from major industries and private individuals. Adresses for offices are to be found in letter box office services only and change frequently thus making it even more dubious. Some of the foundations being used are not even registered by the German authorities.

In Germany accumulated wealth has an even more distasteful smell compared to the United States: two thirds of all industrial enterprises, trade companies and private banks in West-Germany are owned by some 500 families that very often are interlinked by marriages and ancestry and who almost exclusively stem from the German aristocracy.

A famous book by Bernt Engelmann in the 1970ies under the title “The Reich vanished, the Rich remained” proved that these families in 1913 had a similar power base as they had 60 years later and which they even expanded, especially during the Third Reich. Forced labour, torture in concentration camps and two brutal world wars, although military-wise lost, made this class and the heirs of this class incredibly wealthy.

Even today, in a formally free and democratic Germany, these circles have full control of what is going on in Germany and in Europe. In the so called ‘Düsseldorfer Industrie Club’ and similar exclusive circles the owners conspire against the democratic will of the majority of citizens.

Their banks are being rescued by the taxpayer whenever their top managers like Deutsche Bank AG CEO Josef Ackermann picks up the telephone and calls Chancellor Angela Merkel. Today, an heir of August von Finck, billionaire who once financed Adolf Hitler, is donating huge amounts to the right-wing populist party Alternative für Deutschland (AfD) which also counts many fascist members.

On European level, the ‘European Round Table of Industrialists’ (ERT) conspires to undermine EU institutions. The Lisbon Strategy of ‘Stability & Growth’ is one of the results of this.

The funds moved by hedge funds, private equity firms and so called ‘investment’ banks to wherever profit can be maximized are owned by dynasties. Our present economic system produces for profit and not for actual demand consequently forcing the heirs and their managers only to invest into what promises ever greater return and not what might be more sustainable. That’s why the declining financial capitalism is anti-economical.

The question of ownership of capital is the key to the social divide in our society. This key is handed from one generation to the next one while it is virtually almost impossible to penetrate the concrete wall between the social classes, at least not by hard work and good entrepreneurship.

There is a certain continuity to be seen: the Grandfather of August von Finck, Wilhelm von Finck (picture: right) has been an admirer of Adolf Hitler from the very early days on and financed the rise of NAZISM in the 1920ies and 30ies.

Like in the US where the established political class by allegedly putting the first ever LGBT-couple to the White House had disenfrenchised voters big time, in France where Emmanuel Macron, a former Rothschild-investment banker, is seen as someone preventing a president Le Pen is in fact paving her the way while in Germany Mrs. Merkel is doing same for a new Führer.

After months of complex negotiations, Parliament gave its blessing to the EU’s long-term budget for 2014-2020 on Tuesday. All the conditions set out…