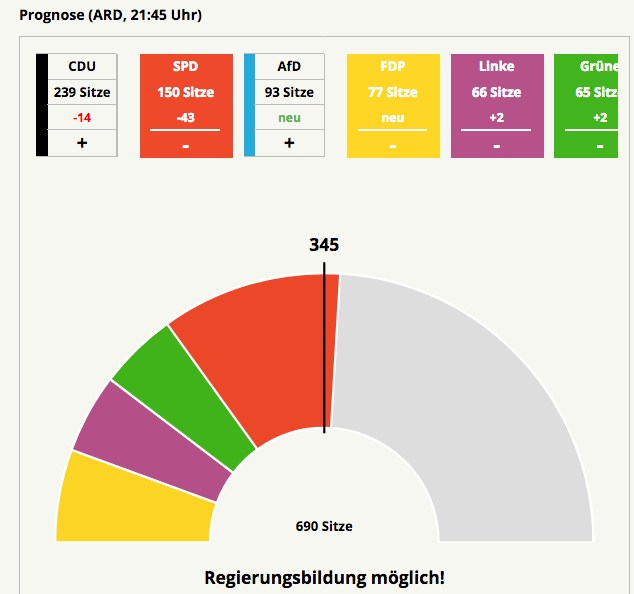 German Chancellor Angela Merkel is being made responsible by party foes for the worst result in a national election for her party, the Christian Democratic Union (CDU) since 1949. Together with it’s “sister party” the Christian Social Union (CSU), which only participates in the free state of Bavaria, the “Union” of CDU & CSU only accounts for 32,9 % of the national vote.

Now, all the mainstream media in Germany is full of the vision that Mrs. Merkel would now be forced into a coalition-government with Greens and Liberals which is widely expected as Mrs. Merkel is unlikely to have anything in common with right-wing populists Alternative für Deutschland (AfD), a party picking up on anti-Euro as well as homophobic and xenophobic sentiment, which gained 12,6% last Sunday thus entering the German Bundestag for the first time.

But, there are other options on the table as well: One of these is the continuation of the highly unpopular Grand coalition between CDU/CSU and the Social Democrats (SPD) the latter who suffered their worst result in history as well by gaining mere 20.5% of the national vote bringing it down to half of what previous chancellors Willy Brandt, Helmut Schmidt and Gerhard Schröder won.

It is clear that SPD-candidate for chancellor Martin Schulz, a dry and unexciting former EU-bureaucrat and president of the European Parliament, would rather go into hiding these days, but when he announced not to become the party’s parliamentary whip for the coming 4 years, it raised many eyebrows.

Instead of taking the top position as leader of the opposition, he gave the preference to the rather vulgar labour minister Andrea Nahles who immediately lashed out at the government she has been a central part of until today by saying “from now on we will smash you!”, adding that she would be ready to open up to DIE LINKE.

Why would a man like Schulz who had nothing to loose after his historic defeat against an incumbent that only mainstream media suggest had good rankings with most Germans give away the opportunity to attack Chancellor Merkel from the front row every day in parliament rather than from a back-bench?

The answer is as simple as it is easy: he still believes he will become chancellor of Germany. And, actually, he got reason to believe so. The “Jamaica” coalition of CDU/CSU (traditionally associated with the colour black), the Greens and the Liberals (usually posing in Yellow) thus composing the colours of the flag of Carribean state Jamaica, is poised to get into severe trouble from the very beginning as the liberal approach of Mrs. Merkel in the “refugee-crisis” that swept about 800,000 Syrians and North Africans into Germany in 2015 strengthening the neo-fascists and far right in Germany, would clash with the rather xenophobic stance of the sister party CSU in Munich that is also at it’s brinks and is likely to turn further towards the right.

The Greens, a rather open-border – party, would not do well in a coalition government with CSU which calls for a 200,000 cap per annum on migration leaving it open what would happen to the 200,001st refugee to attempt to enter German soil. The liberals, having regained parliamentary representation by astonishing 10% after 4 years of absence, are also careful whether to join a government again with Mrs. Merkel who is described by many commentators as being a “black widow” finishing with her opponents like with her coalition partners in a mysterious way by making them become obsolete by taking over their positions.

This has happend to the Social Democrats already twice leading to halving their electorate in 2009 and now in 2017 and one time to the Liberals themselves by almost causing them extinction.

Now, how to get rid off this Chancellor? First of all, the Social Democrats have to eliminate their old right-wing protagonists around former Chancellor Gerhard Schröder who introduced the infamous labour market, pension and social standards-liberalisations infamously referred to as  “Agenda 2010” that disenfranchised millions of voters and potentially led to the rise of the ultra-right-wing “Alternative für Deutschland” for which the anit-foreigner sentiment was only the pipe to let steam off.

Then, Martin Schulz could form a coalition government with leftists, greens and liberals (by colour red-red-green-yellow or simply: Ghana). Leftist leader Dietmar Bartsch is said to be interested in a position as minister of the interior, former leftist party whip Gregor Gysi, a famous lawyer in both German states, as justice minister and Green party leader Cem Özdemir as foreign minister, a position Mrs. Merkel would not allow him to occupy.

Liberal leader Christian Lindner would have the option to either enter Merkel’s “Jamaica-coalition” by becoming finance minister since Mrs. Merkel pushed incumbent Wolfgang Schäuble already to the largely ceremonial office as President of the German Bundestag, or under a Chancellor Martin Schulz who would offer the liberal the same prestigious and influential position of Minster of Finance.

Mr. Lindner portrayed himself during the election campaign as a modern, young, urban, professional politician who also played with his boyish image as a young eraly fortie’s man. For him to join a government leading to the past 12 years would create an adverse public image whereas the coalition with SPD, Leftists and Greens could serve his refreshing image of a wind of change.

In any case, Mrs. Merkel’s space for maneouvres has shrunk a lot and even though Mr. Schulz is also not a winner of the elections of last Sunday, he might as well emerge as her successor due to clever moves behind the scenes.

the graph above does not illustrate the final result faccurately. it is even clearer as 355 members would form a majority leaving the SPD-Leftist-Liberal-Green coalition with 14 votes more than necessary to form a government. Here is the final result. According to this the “Jamaica” Coalition of Mrs. Merkel and the Greens & Liberals would account for 393 while the “Ghana”-coalition of Martin Schulz would make it to 369. The absolute majority would be at 355.