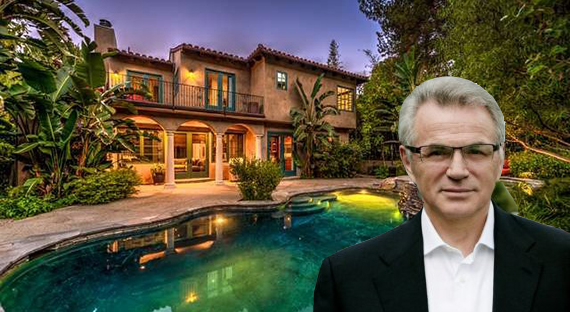 The feeling of nostalgia for one’s homeland, that expatriates around the world know so well, also appears to apply to fugitive criminals on the run!

Viktor Khrapunov, who in Kazakhstan faces multiple allegations of corruption, fraud and money laundering, has become very fond of teaching democracy to his countrymen, albeit from a very safe distance – Switzerland.

One slogan that appears on the official website of ‘Democratic Khrapunov’ states that the author “supports all policies that empower individuals to take an active role in modelling their own future. He believes Switzerland to be a model for emerging democracies”.

This affection towards Switzerland is understandable because it is in this land that he and his family live safely today, and where they are amongst the richest in the country: their considerable wealth based on money and valuables “sent” from Kazakhstan.

Khrapunov, the former mayor of Kazakhstan’s largest city, Almaty, was found guilty of defrauding the state to the tune of some $ 300 million. He has been the subject of an impressive 20 criminal cases, and has long been sought by Interpol for money laundering, fraud, organisation of a criminal group, abuse of authority, and corruption.

He developed some very interesting and imaginative plans for the withdrawal of funds from Kazakhstan. Through a company belonging to his wife, and other offshore companies, and he has acquired property, including real estate, in Switzerland and the United States.

The company belonging to his wife, and his son, is famous in Lausanne for large-scale development projects.

According a recent investigation, some of the money for these projects was withdrawn from Kazakhstan while he was still serving as mayor. He allegedly obtained this money through bribes for the construction of a new terminal at Almaty airport, an agreement with the Belgian company Tractebel to sell the city’s energy complex, as well as the illegal transfer of land municipalities to private property.

But in the United States, Khrapunov was to run into problems…

The American judiciary, having verified the allegations made by the Kazakh government, has  blocked properties, including several villas, belonging to the fugitive and his family.  Khrapunov stands accused of money laundering, and possibly even paying bribes.

Generally, ownership is not directly in the name of Khrapunov, but in those of legal entities of offshore companies; therefore it can take some time to find conclusive evidence of real estate transactions with which he may have been involved in the United States.

However, some things are known.

Khrapunov appears to have used at least three companies – Soho 3310, Soho 3311 and Soho 3203 – to move money from Kazakhstan. Since each of these companies is a limited liability company, it is easy to hide the real owner.

But what is interesting is that a week after their creation, these companies paid more than three million US dollars for the purchase of an exclusive apartment in Manhattan, which suddenly became the property of the Khrapunovs.

The US authorities also discovered that the ultimate beneficiary of the Soho companies was Elvira Kudryashova, daughter of Khrapunov. She also appears to have engaged the New York law firm Martin Jajan, which signed purchase documents on behalf of the Soho companies in the capacity of buyer’s agent.

In addition, the Khrapunov family worked together with alleged fraudster Mukhtar Ablyazov, also currently of interest to Interpol. A British investigation revealed that the son of Viktor Khrapunov’s son, Ilyas, is married to Ablyazov’s daughter.

Khrapunov was the owner of the group of the “Swiss Development Group”, created with money withdrawn from Kazakhstan. The company was looking for investment projects, and seeking financing. For such projects, funds would have been drawn from Kazakhstan, Russia and Ukraine, where the branches of the BTA Bank belonging to Mr. Ablyazov were located.

Khrapunov appears to have been able to turn stolen funds into valuable and “clean” properties, specialising in investment in five-star condominium hotels, private hotels in Switzerland and other also in other countries.

Money drawn from Kazakhstan by Ablyazov and the various ‘franchises’ of the BTA bank, has been converted to property and stock.

Viktor Khrapunov, the simple Swiss retiree, is not merely content to live comfortably, but now chooses to pontificate on the state of democracy in his native country – a country that he has robbed, whilst escaping justice by hiding in neutral Switzerland.

On November 9th the High Representative of the Union for Foreign Affairs and Vice-President of the European Commission, Federica Mogherini, paid a visit…