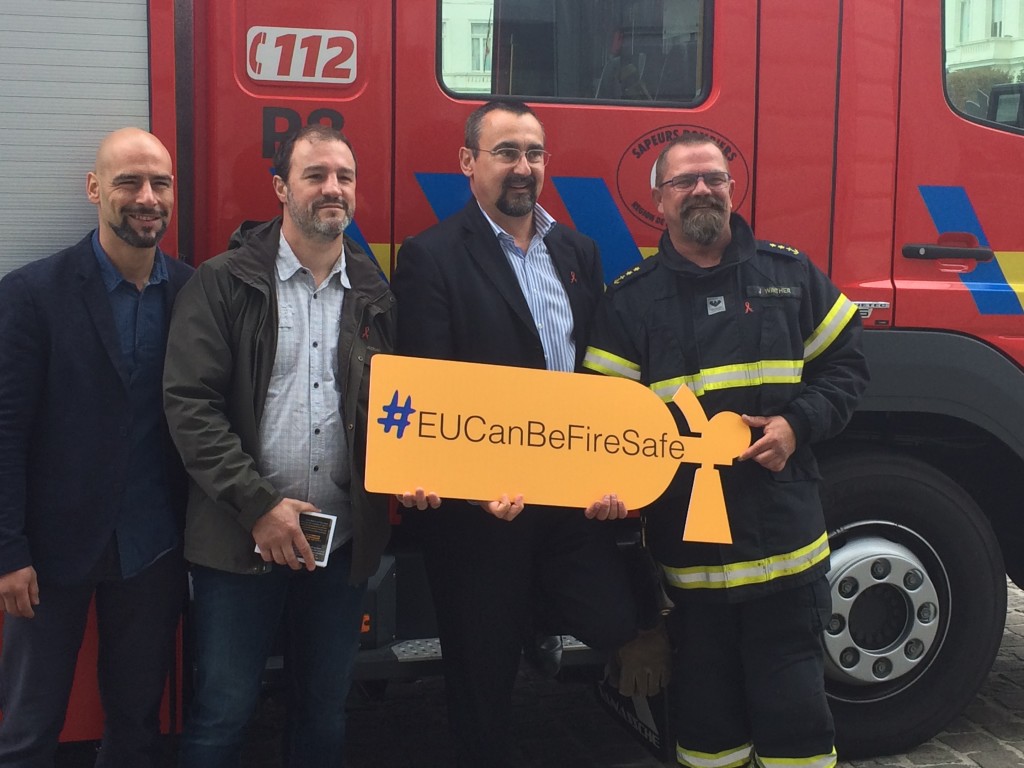 MEPs have thrown their weight behind calls for EU action to help tackle the “toxic time-bomb” facing firefighters across Europe.

They say the Grenfell Tower fire tragedy in London in which scores of residents perished highlights that more should be done to improve building safety across Europe.

A campaign aimed at raising awareness of the issue – along with the increasing health problems said to be facing fire men and women – was taken to the European Parliament on Wednesday.

An EU directive on the issue should, say the campaigners, also apply to “retrofit” buildings – properties which are being renovated or refurbished.

With several EU policies impacting on fire safety, there are also calls for an EU-wide “fire safety strategy” so as to provide a more “coordinated” approach.

Fire Safe Europe also wants the EU to introduce requirements to test the toxic smoke from construction products and to label those products with the results.

Among those backing the campaign is British ECR member Rupert Matthews who told this website: “After Grenfell, there is understandably a lot of interest at present on the construction of buildings and the materials being used.

“I agree that more needs to be done to ensure the correct insulation and cladding is used.But we should also be focusing on the toxicity given off by many of the products now used in the construction of new buildings and the furniture in these places.

“We have seen with all too tragic consequences that in the event of fire these products often give off thick, toxic smoke which can increase the risk of death and is cancer causing for the men and women fighting these fires.”

Matthews, who only recently took up his MEP seat, said he wanted to provide “solidarity” with the campaign.

He added, “After Grenfell, the UK government and authorities are naturally looking very closely at these issues but as far as I am aware there is very little going on at EU level and that needs to change.”

“It isn’t just the Grenfells of this world where people are dying, of course, but in much smaller fires every day and all over Europe.” – Rupert Matthews, MEP (ECR/UK

Another UK MEP, John Flack, said, “Grenfell was a terrible tragedy on a number of counts. It is being investigated at different levels and I would not want to prejudge these inquiries but I am happy to support this campaign because improving fire safety of buildings has to be in the interest of everyone.”

Danish firemen Tommy Kjaer, who is also president of the EU-wide Firefighters’ Cancer Organisation, said he was in Brussels to help raise public awareness of the increased cancer risk facing firefighters nowadays.

He said, “The increased use of certain products, like plastics, in construction work and furniture has increased the cancer risk for fire men and women.

“A lot more needs to be done to label these materials so that builders and consumers can make informed choices.It is also necessary to measure the toxicity in smoke so we have more reliable data on this for legislators and others.”

His comments are endorsed by Anne Wibin, who has worked as a firefighter in Brussels for ten years and who was among those present outside parliament for the campaign.

She said, “It has been estimated the lifespan of the average fire fighter these days is seven years less than the general population. More and more firemen and women are being affected by cancer and, often, the reason is directly related to them being exposed to the increased levels of toxicity in smoke.”

Another Brussels firemen, Christian Maes, agreed, saying, “We are here to help promote fire safety in building which,of course, has been brought into the public eye after the awful events in London.”

Sarah Debbiche Krichen, spokesman of Fire Safe Europe, said, “Studies show that firefighters are exposed to at least 14 different types of cancer because of toxic smoke in fires. Currently, there are no tests being done on toxicity levels in smoke and that is something we say has to change.”

MEPs will next Tuesday discuss the issue of fire safety in buildings during a debate with the commission and council in Strasbourg. A vigil will also be held in the French city ahead of the debate in memory of all victims of fires.