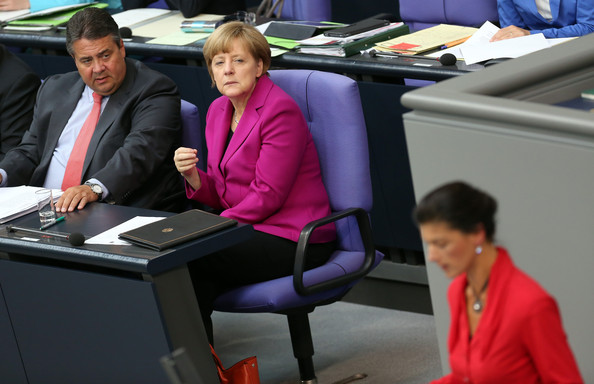 Chancellor Angela Merkel (Christian Democratic Union / CDU) manages even after 12 years in power not to be associated with her government’s policy as polls clearly indicate that in most topics such as social subsistence, pensions, healt care, education, immigration, relations with Russia and Turkey as well as european integration voters are quite disenfranchised with politics of the conservative – social democratic coalition government in Berlin but nevertheless Angela Merkel is popular as never before.

Some Germans take it as a bitter joke to describe Mrs. Merkel as Germany’s biggest “NGO” citing her infamous indecicivness as a form of non-governing that her supporters claim is the wisdom of a true leader.

But, it may also have to do with the fact that the Social Democrats (SPD) did not manage to appear as an alternative since they are for 8 of the past 12 years part of the “Grand” coalition government facing similar loss in popularity as the Social Democrats in the Netherlands or Austria.
Much of the German’s anger about social injustice and threats of poverty for elderly and children in the EU’s richest member state results directly from Social Democratic-Green governments under Chancellor Gerhard Schröder from 1998 until 2005 during which the German labour market-liberalisations along with social-, tax- and pension reforms collectively known as “Agenda 2010” as that led to a wage and standard dumping had been executed enhancing an aggressive export strategy that destabilised the rest of the EU.

Many in the leadership of SPD are still fascinated by Gerhard Schröder and even invited him to deliver the keynote speech at the nomination convention of candidate for chancellor Martin Schulz, a widely unknown EU bureaucrat and former EP-president, but outside of the conference hall people found this a bitter pill to swallow.

Martin Schulz fulminantly started out in January of this year when being nominated for the party’s top-jobs as chairman succeeding foreign minister Sigmar Gabriel (picture above) by creating a feeling of fresh air when criticising openly the “Agenda 2010” of Gerhard Schröder and promising to inhale social justice into the neo-liberal reality of SPD-policy making millions of voters applaud him for his openess that some referred to as “Glasnost” remembering the last USSR president Mikhail S. Gorbachev who openly broke with taboos.

But, the Agenda-apologists quickly brought Mr. Schulz back in line with core Schröderism and as a consequence Mr. Schulz’ quick rising star descended rapidly leading to the loss of three state-elections considering a test run for the Bundestag federal elections this coming Sunday. Mrs. Merkel suddenly was firm in her seat again after a brief moment of a wind of change.

A debate between Chancellor Angela Merkel and challenger Martin Schulz ended in the desastrous collapse of Mr. Schulz strategy to not attack the government’s policy as his party was in bed with Mrs. Merkel’s CDU for too long.

In the meantime many Germans favour the leader of the opposition in the German Bundestag, Sahra Wagenknecht, leftist DIE LINKE parliamentary whip, since all debates in Bundestag when she is speaking right after Mrs. Merkel show a clear alternative rather than social democratic Angst expressing fear to attack a popular chancellor even though she stole most of the topics shifting CDU to the centre of the political spectrum leaving room at the right wing for neo-conservative Alternative für Deutschland (AfD) that raises neo-fascist anti-foreigner sentiments along with anti-EU nationalism and a neo-liberal agenda for more privatisations while trying to roll back on liberal LGBT-rights. Sahra Wagenknecht continuously is stirring controversy when lauding US president Donald Trump for his economic agenda or hailing Russian president Vladimir Putin but she seems to strike a tone with this that people find refreshing.

Bitter for Martin Schulz that even the right-wing mass tabloid media BILD Zeitung favours Sahra Wagenknecht raising the question why if she was more popular than the social democratic contender being seen as a true challenger of Mrs. Merkel, SPD and LINKE did not manage to nominate her as a common candidate giving Mrs. Merkel a real hard time.

Instead, Sigmar Gabriel and Martin Schulz praised the victory of former Rothschild-investment banker Emannuel Macron at the French presidential elections in May of this year saying he prevented a nationalistic president Le Pen although his labour market reforms modelled on Gerhard Schröder’s Agenda 2010 are likely to pave the way for Mrs. Le Pen to win the Elysées in 4 years time.

And, last but not least, the French Socialists have to sell their historic central headquarter in Paris’ chique 7th Arrondissement. Will the German Social Democrats have to sell one day the Willy Brandt Haus in Berlin?!

Sunday’s elections could very well end for the German social democrats like they did for the French Socialists also because the German politicians left of Mrs. Merkel did not manage to form a leftist alternative with a credible front-runner. Like in the US where the party functioneers did not want to hear the signals of the masses who became enthusiastic over Senator Bernie Sanders’ candidacy but promoted Hillary Rodham Clinton instead, German social democrats were not brave enough to form a platform together with leftists under the only one voters saw as a clear alternative: Sahra Wagenknecht. Socialism did not provide for a political choice but for an alternative, in Capitalism this is vice-versa.

No more tar and nicotine info on packs