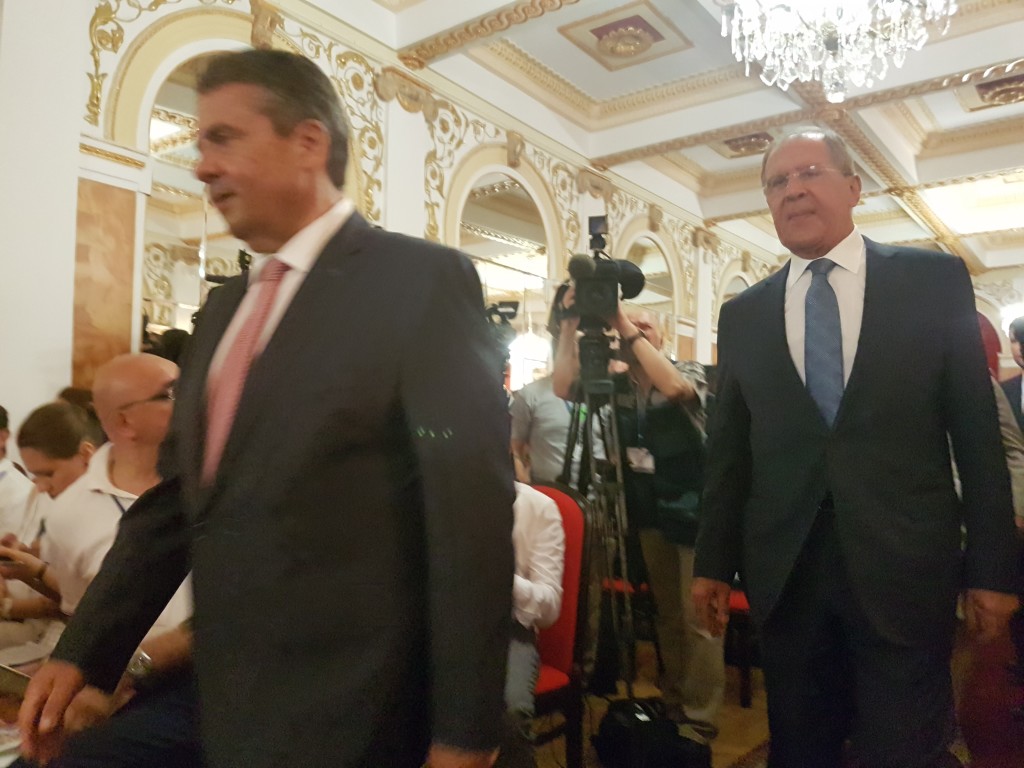 The setting of the meeting of Germany’s vice chancellor, foreign minister Sigmar Gabriel, with Russian foreign minister Sergey Lavrov yesterday evening could not be more symbolic: the southern-russian city of Krasnodar where German Wehrmacht and SS soldiers committed astrocities during WWII and crimes against humanity. During his speech Mr. Gabriel commemorated the victims of NAZI-Germany and emphasised that in lieu of the historic facts Russian – German friendship was a great treasure and that it should be expanded in forms of city-partnerships that German communities and cities also entertain with France, Greatbritain and many other European countries.
The two foreign ministers spoke at the opening ceremony of the XIV Russian German city partnership conference in Krasnodar that lasts until 30 June. Mr. Lavrov agreed with his German colleague on the importance of the cultural and political exchange on all levels and reiterated that Russia will always keep a place free in it’s heart for Germany.
Beforehand the chairman of the German-Russian council, Matthias Platzeck, a former social democratic ministerpresident of the east-german federal state of Brandenburg quoted legendary west-german chancellor and nobel peace laureate Willy Brandt, the first post-WWII social democratic chancellor, as saying that “in difficult circumstances one ought to take one’s heart into one’s hands and bring it accross to the other side” thus laying the foundation of the famous social-democratic – liberal Ostpolitik of the 1970ies that during the cold war eased the tensions with the Eastern Block and particularily with the East German government and the Soviet Union.

Ostpolitik has been widely criticised by the conservatives in West-Germany although it was them under chancellor Helmut Kohl who cashed in on this development when it came to German unification in 1990.

Everyone in the Krasnodar philharmony last night shivered when a russian choir sang both national anthems to which the audience of more than 500 dignitaries, city councillors from Russia and Germany, cultural workers and youth activists stood up. Suddenly, there was a sense of hope for a non-political common understanding between the two peoples who look back on a thousand years of history that included cooperation and exchange like under Catherine the Great, german born princess of Prussia who became ruler in Russia when succeeding her husband Tsar Peter III and lead a wave of modernisation and general human rights as she exchanged letters with French philosopher Voltaire.

Now, the two foreign ministers by making reference in their speeches to the common history provided for a vision that could tempt one to think that a new Russian-German age was imminent and the logic consequence of the blood stained 20th century.
But, at the press conference of Mr. Gabriel and Mr. Lavrov that was held in a room in the same historic building while in the philharmony the concert continued, such mystic atmosphere was soon destroyed as pressing current issues such as Syria, Ukraine and NATO expansion took center stage when a journalist from deutsche presse agentur (dpa) put the first question to the two ministers urging them to discuss the US-American allegation of chemical warfare by Syrian president Assad.
Russian foreign minister Sergei Lavrov immediately rebuked his German colleague’s statement that “Assad was a dictator and war criminal using chemical weapons against his own people” saying that he felt reminded of the showdon of Colin Powell in the United Nations security council in New York in 2003 ahead of the invasion of Iraq citing a “smoking gun” accusing Iraq’s Saddam of building up an arsenal of weapons of mass destruction for which even years later not a single proof had been found.
EU chronicle (from min 40) confronted Mr. Gabriel with the fact that the UN’s Carla del Ponte herself cleared Assad of alledgedly being responsible for the first known use of chemicals in the war against the rebels in Syria in 2012 and also pointed out that the Massachusetts Institute of Tehcnology Professor Postol in his report to the White House has proven beyond doubt that the detonation of the sarin agent in April 4, 2017 in the Syrian town of Khan Shaykhun of this year has not been a missile fired or a bomb dropped from a plane but a granade ignited on the ground within the rebel-held city. Mr. Gabriel had no comment to offer and instead concentrated on the second part of the question by EU chronicle asking whether the sense of unity between Russia and Germany as described by Mr. Platzeck should be given a second chance rewriting Willy Brandt’s vision of a (new) Ostpolitik leading to a closer cooperation between Russia and Germany in solving the problems in Syria and Ukraine. Mr. Gabriel came back quite brizzled saying that it was not necessary as the two sides were already cooperating despite many differences in a truthful way.

And, Mr. Lavrov agreed when being asked by EU chronicle whether there was hope for a continental partnership reaching from Lisbon to Vladivostcokj that at least in the pragmatic sense this was true, but it sounded a tad disappointed as Mr. Lavrov pointed out that especially in the case of Ukraine the Western powers had abused their diplomacy in order to help overthrow the legitimate government in Ukraine while blaming Russia for the war in the eastern part of the country and expansion of NATO despite earlier promises to integrate Russia as an equal member in the NATO-Russia council that was suspended unfairly as Mr. Lavrov reiterated.
Given the fact that in the same building parallel to this hardtalk-kind of press conference so called civil society celebrated peace and Russian – German friendship the contrast between vision and reality could not be greater, but, as several participants at the Russian – German city partnership conference vowed, one would continue to build grassroots diplomacy which was well and alive since more than 25 years already when the city of Krasnodar and the city of Karlsruhe exchanged their flags.
Watch the full press conference here: