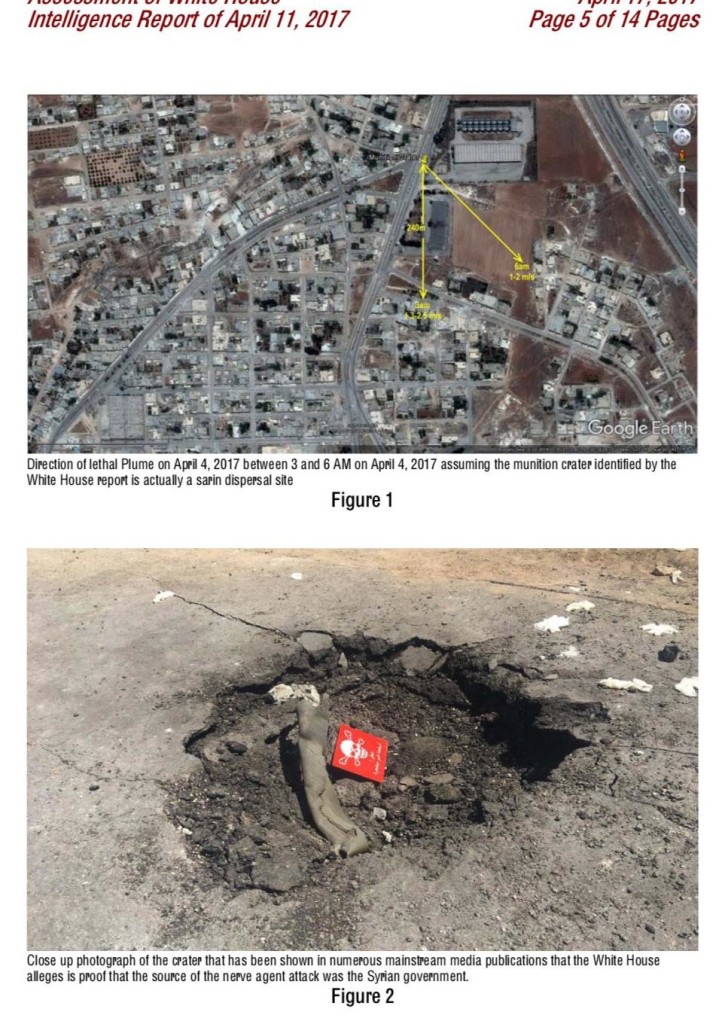 Much has been written and said about the alleged nerve agent attack of April 4, 2017 in the Syrian town of Khan Shaykhun and immediately the finger-pointing set in. The Trump-administration accused President Assad and indirectly his Russian allies, Moscow rebuked that it has been a typical false-flag – operation by the US-sponsored “moderate” opposition.

Indeed, these rebels together with US-intelligence agencies in 2013 already proved that they were good for any Tonkin-scenario using exactly same methods that led to the Vietnam war. Wikipedia writes that back then, “it was originally claimed by the National Security Agency that a Second Gulf of Tonkin incident occurred on August 4, 1964, as another sea battle, but instead evidence was found of “Tonkin ghosts”[7] (false radar images) and not actual North Vietnamese torpedo boats. In the 2003 documentary The Fog of War, the former United States Secretary of Defense Robert S. McNamara admitted that the August 2 USS Maddox attack happened with no Defense Department response, but the August 4 Gulf of Tonkin attack never happened.”[8]

Once the dust has settled, it is always easier to falsify and verify what actually has happend during a conflict and nowadays it is even easier to do this rather quick and to dismantle the propaganda – lies of any aggressor.

In 1999, in the run-up for the Kosovo-war German foreign minister Joseph Fischer said that one had to go to war against Serbia in order “not to let Auschwitz happen again” citing ‘military intelligence’ information provided by German defense minister Rudolf Scharping proving massacres among tens of thousands held by Serbian forces in a football stadium in Pristina. Sattelite images were not provided. Later, after the first war since 1945 that Germany actively launched when German chancellor Gerhard Schröder ordered the 78-days bombing of Serbia, it transpired that the underlying reasons for the war were false and construed by secret services in Bulgaria. Nobody was put to trial over starting a war of aggression in which Germany participated, so far.

But, today, by IT anybody can use from a smartphone, it becomes much harder for conspiring government officials to uphold lies. Recently, within a week of Mr. Trump’s emotional outbreak over supposedly Russian-Syrian war crimes, MIT-Professor Theodore A. Postol trashed the White House’s theory on scientific basis.

Professor Postol writes that there is no conclusion possible that the crater was created by munition designed to disperse sarin after being dropped by an aircraft. In the following scientific analysis he proves beyond doubt that the munition had been placed on the ground with an external detonating explosive on top of it that crushed the container so that the sarin could be dispersed.

In no way, Professor Postol concludes, can the story the White House is telling be uphold.

He warns: “What the country is being told by the White House can not be true and the fac t that this information has been provided in this format raises the most serious questions about the handling of our national security.”

It becomes evident once more that the US are not changing their strategy at all. The Obama – administration already wilfully assisted the so called Islamic State (IS) and since Mr. Trump changed his stance on Syria and his relations with Moscow mainstream media is applauding him. “Normality” for a US-president is defined as policing the world, of course in the name of human rights, freedom and democracy and in this sense even Mr. Trump has suddenly advanced to a “normal” politician.