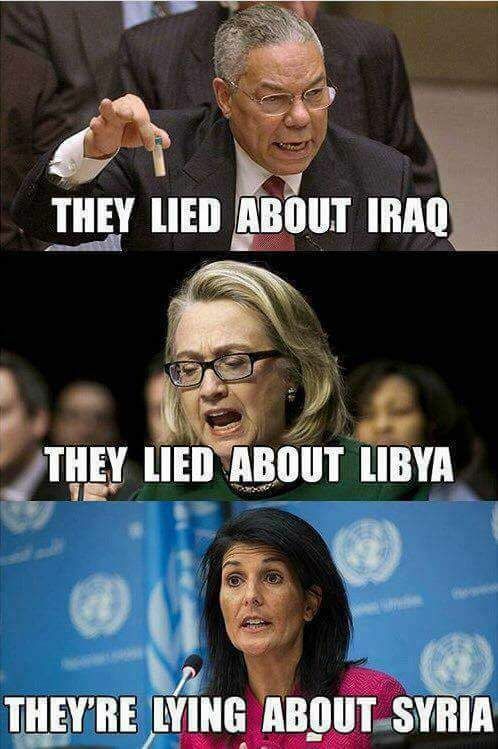 Former US-President Obama once woke up to news he believed was fake: he was awarded the Nobel Peace Prize although he had not had any chance to decide over war & peace yet since he only came into the oval office short time before. Later, in 2015, the former Secretary General of the Nobel Committee, Geir Lundestad, regretted to have lauded Mr. Obama.

Now, President Donald Trump seems to aspire same trophy but he has to learn that in order for winning such honorable award it is simply not good enough to be carried by CNN and intelligence agencies over the red tape but that one also ought to make peace with Hillary.
Last night, Mr. Trump came a big step closer to that goal. Not only is he sidening with the islamist terror organisation “IS” that had been created by the Obama-administration but he also follows into the footsteps of any US-administration of the past 25 years attempting to meddle in the middle east.

As always, the smokescreen that is being set up is “human rights” and “freedom & democracy” but as Platon wrote there is no war which is not faught over gold or land. This is also true in this conflict and one may see a benefit in a pragmatic approach of the new US-administration which understands the oil and gas business. A closer scrutiny reveals that USA and Russia have similar interests and probably will find a way to settle the conflict once the pipeline- and gasfields issues are worked out between Exxon and Gazprom. After such deal has been cut, Mr Assad will have to find a place for his exile, since also Russia won’t need him any longer.

German social democratic candidate for Chancellor, Martin Schulz, in contrast to incumbent Angela Merkel, said today that the Syrian conflict requires a diplomatic solution for which Europe has to do it’s bit and take over responsibility. Oppositional leader Sahra Wagenknecht said on ZDF, Germany’s second channel that the German government and EU member states should not wait for President Trump to make up his mind but define their own policy towards Russia by building bridges.

Chancellor Angela Merkel did not distance herself from the US’ illegal attack but played down the role German Bundeswehr airforce surveillance has in providing intelligence to NATO partners as part of a non-combat mission.

Like Mr. Trump, Mrs. Merkel expressed strongly that she believed that the Sarin-attack was conducted by the Syrian army. No word about the fact that Germany had delivered the chemical ingredients for these Weapons of Mass Destruction through Turkey. Instead, western free media continues to quote the so called “Syrian Observatory for Human Rights SOHR” in London that is run like a typical one-man show by Osama Suleiman an agent using alias covernames such as Rami Abdul Rahman or Rami Abdelrahman.

This looks as credible as the London cab driver who once provided the key “proof” for Saddam’s Weapons of Mass Destruction arsenal to Colin Powell and Anthony Blair who used this fakenews as justification for killing an estimated one million people.

And, mainstream media seem to have forgotten completely that at that time US-President Barack Obama lauded himself in 2014 to have ordered confiscating the chemical weapons for which the UN had issued a resolution with which President Assad had fully complied. Because it had been proven to be true that any and all chemical warheads had been transported outside of Syrian territory the UN-agency OPCW had been awarded yet another Nobel Peace Prize.

But, maybe, last night’s attack killing at least 7 human beings, is part of a strategy to prove to political opponents in Washington, D.C., that there aren’t any secret friendly ties with Russia?!