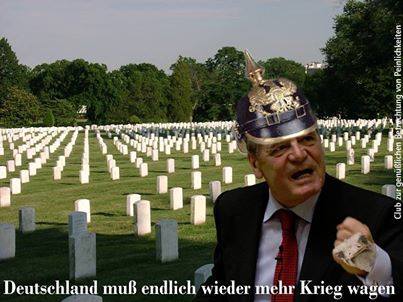 “The fact that there are fallen soldiers again is hard to accept for our happiness-focused society”, German federal president said in 2012 and ever since demanded his fellow citizens to come to terms with a new role in the world Germany should play and “find back to normality” when it comes to military missions by the german federal armed forces Bundeswehr.

One should think, though, that after two world wars of which at least for the second one Germany can be blamed all alone, ‘normality’ should mean for German leaders to abstain from any military engagement except for defense purposes. The vast majority of Germans in opinion polls consistently says that military missions such as in former Yugoslavia and Afghanistan should be ended and not be the norm.

Nevertheless, since the “Red-Green” coalition government under social democratic chancellor Gerhard Schröder and green-pacifist Joseph Fischer broke with the big post WWII taboo in 1999 by participating actively in the war against Serbia over it’s breakaway province of Kosovo, and by executing “unlimited solidarity” (Schröder) in the aftermath of 9/11 offering the Bush-administration to station German troops in Afghanistan, many more holy cows have been slaughtered by those who once fed them.

On 1st September 2014, in a speech at Poland’s Westerplatte where NAZI-Germany triggered WWII, Mr. Gauck warned Russian President Putin and called him an aggressor while failing to mention the victims of NAZI terror in the Soviet Union and Russia. Mr. Gauck referred to Ukraine and the Crimea but completely ignored the fact that it was the US’ ‘NGOs’ like Endowment for Democracy that spent 5 billion US-Dollars for anti-Russian riots that lead to the fascist coup d’état in which German foreign minister Frank-Walter Steinmeier, Germany’s federal president to-be, played a dubious role.

In the meantime, the German Bundeswehr is being opened for migrants who wish to serve as lower rank soldiers. In lieu of the fact that many migrants and refugees come to Germany either to rescue themselves from war or in the hope of having a better life the aspect of a “foreign legion” comes along like a cynical joke as they might as well find themselves on the other side of the trenches. Germans will not be the only people who will have to get used again to news about ‘collateral’ damage.

Now, kind of out-of-the-blue, Germany’s criminal code got changed in a very significant aspect. Since yesterday, 1st of January 2017, the very clear prohibition to launch a war of aggression, which is a cornerstone of Germany’s constitution, the Basic Law’s Article 26, has been abolished and is being replaced by a clause that leaves huge loopholes for interpretation. §80 of Germany’s criminal code, the Strafgesetzbuch (StGB), had so far sanctioned any act that could launch a war into which the Federal Republic of Germany could be drawn into by a minimum sentence of 10 years up to lifelong imprisonment.

The federal judges who had to deal with my request for prosecution and indictment of at that time German chancellor Gerhard Schröder and his foreign minister Joschka Fischer for drawing Germany into the Kosovo-conflict by illegally and anti-constituionally dispatching German soldiers to participate in NATO’s 78-day bombing campaign against Serbia didn’t have it easy not to arrest Mr. Schröder on the spot. The judges argued in a subordinated manner that “only the preparation of a war of aggression was punishable but not the participation in such war prepared by others.”

In my book The Verdict – when a state is hijacked I put in a fictional way Schröder and Fischer to trial strictly by applying the German constitution and criminal law by proving the case against them by the facts that lay before us but which the judicial system so wilfully ignored.

Since yesterday it is been made almost impossible to indict any of our political leaders even if they launch more wars all by themselves and hold a smoking gun in their hands. §80 of Criminal Code has been deleted and replaced by §13 of the Code of Crimes against International Law.

First of all, the possible indictment is being limited to those persons who control the political and military actions of a state. Secondly, it doesn’t categorically prohibits any kind of war of aggression but only those that are “obviously in severe violation of the UN charta”. So all other wars are from now on allowed?!

And, how much interpretation does one need to judge that a war was “obviously” and “severe”? It is typical for international law and especially when it comes to the UN Charta that it is as little concrete as possible because diplomats need loopholes. Our national criminal law and our constitution were so absolutely clear and served our partly self-imposed post-WWII restriction when it came to military engagement.

Last but not least, the new paragraph can not be enacted under German law in German courts of justice but only by the International Court of Justice in The Hague which is discredited immensly for it’s bias prosecutions of leaders of economically poor countries whereas the industrialised northern nations so far never got caught for their crimes as the United States of America didn’t ratify the treaty.

Germany has won back respect and friendship by other nations by a moderate and non-militaristic foreign policy but since unification in 1990 these principles are more and more rapidly being given up.

For me it will never be ‘normal’ to send our troops to other countries to kill people. For me it will always be normal that we only let peace come from German soil.