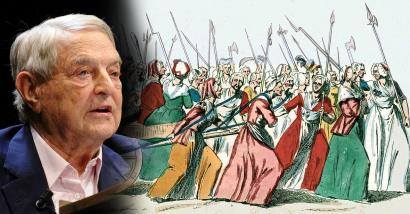 Maybe it describes best what is currently going on in the so called “World as we knew it until today” that an angry oligarch who lost a billion Dollars over the electoral victory of his fellow-oligarch who is raging his way into the Oval Office is employing so called “civil society”, artists, singers, emancipists, environmentalists and civil rights activists to organize the “counter revolution” as German SPIEGEL magazine called it.

Let’s wind down a bit.

First of all, a counter-revolution, we Germans have recent experience with that, requires that one has had a revolution beforehand. Germany, so far was the only country in the world as we knew it until today that managed to have a counter-revolution in 1989 without ever having managed to push a revolution through. A revolution by definition has to contain a philosophy or an ideology, at least an idea, please, not only 140 characters of abuse. That is rather called a roll-back.

So what is it that makes one of the richest Ultra High-Net-Worth-Individuals (UNHWI) as Merril Lynch refers to people like George Soros call the shots and have his civil society march in many US cities and also in other countries wherever Mr. Soros’ “NGO”, the “Open Society Foundation” that also financed the journalists who brought to light the Panama Papers (of course without harming any US-oligarchs), is operating?

The answer is typical American: Trump’s election is bad for his business. As the Wall Street Journal and Bloomberg News reported, Mr. Soros who had been betting on a victory of Mrs. Clinton lost in the weeks after November 8, 2016 almost one billion US-Dollars.

Now, that is a reason to moneypulate elections! When Mr. Trump during his election campaign spoke of the possibility that the elections might get rigged adding he would accept the result only if it made him the winner, one could imagine that he would try to steal the election from Mrs. Rodham Clinton.

But, as EU-chronicle dared to report, it was indeed not too far fetched to imagine that the voting machines in 16 states, among them Pennsylvania, Michigan and Wisconsin, more than 300 districts, were provided by George Soros’ company SMARTMATIC and were according to Harvard IT lecturer Professor Avi Rubin easy to be hacked actually were manipulated.

The recount initiated by Green party candidate Dr. Jill Stein and astonishingly reluctantly supported by the Clinton-campaign threatened to dismantle the fraud as it produced more than half of the Detroit precincts being ineligible for a recount. Clinton supposedly had won Detroit heavily, at least to the official result. The Detroit News reported that “the number of ballots in precinct poll books did not match those of voting machine printout reports in 59 percent of precincts, 392 of 662.”

Apparently, when trying to push the ballots through the readers, the ballots would be stuck and they’d have to push them through again thus ‘accidentally’ resulting in a double count, officials told the local news agencies. They said the poll workers sometimes ‘forget’ to adjust the machine count and instead let the ballot count twice. Sounds reasonable.

It gets worse, though. Vigilant citizens who observed the recount said that there were numerous signs of vote tampering in Hillary-heavy precincts.

The suspicion is ripe that Mr. Soros has tried to rig the elections in favour of his candidate, Mrs. Rodham Clinton, but couldn’t turn a landslide victory of Mr. Trump completely to the opposite even though each vote for the Democrat was counted 6 times in Detroit. Probably, this has been so in all 16 states where Mr. Soros had placed his voting machines. Mrs. Rodham Clinton must have feared facing huge embarassment and rather conceded victory to Mr. Trump. Poor Jill Stein simply was not confided with the truth and wasted a lot of money from ‘civil society’ sources which unfortunately had not come forward when Bernie Sanders needed it.

Now, in 157 cities all over the world, except for Russia where Mr. Soros’ NGOs are considered foreign agents, of course, hundreds of thousands of women are marching against Mr. Trump’s inauguration.

To make it crystal clear: the writer of these lines in no way finds common ground with US President Donald J. Trump’s alleged racism, anti-emancipatory, anti-LGBT, anti-muslim and nationalistic positions as well as his willingness to re-introduce torture. No BUT.

The issues of civil rights, human rights and liberties in the United States of America are for the US-citizens to be dealt with and like in the previous decades when they didn’t want to be helped with that from outside the US, especially not from socialist Europeans, they also don’t need our solidarity now. Likewise, we do no longer invite American wisdom in teaching us about Freedom and Democracy by their wars on terror they create wherever access to resources is at stake.

And, we also refuse to be held hostage by oligarch sponsored ‘civil society’ activists who think it is a political statement to show female chests on market squares. Mr. Soros can look at that at his own choice if his wives or girlfriends let him. Just leave us alone and don’t teach us political correctnes that in the end is the opposite of freedom and democracy.

It will be debatable whether Mr. Trump’s stealth health care plan for all will really be better than Obamacare but again, this is a matter the US Americans have to deal with. We observers from abroad have nothing to say to that. Very often it has been true in politics that the holy cows ought to be slaughtered by those who once fed them, in other words, Republicans are sometimes acting more social than their reputation is. Social Security has been brought to life by Roosevelt, but it was Reagan who put significant funds behind it. And, it has been Clinton who limited it to 10 years per life.

And, from far one can see that President Clinton’s economic policy ended in a huge bubble as instead of creating jobs and enhancing the industrial policy he and Al Gore were fascinated by the Internet and created a vitual reality casino at NASDAQ that let it rise by 114% in the year 2000 while DOW JONES only rose by 1.2%. A de-industrialisation – wave swept through the United States’ rust-belt.

Instead of classical Keynesianism one would expect from a Democrat Clinton privatised Keynesianism and let middle class people take out mortgages in order to cover credit card debts. It is clear, that the majority of Americans didn’t want to go back to those days.

It should only be noted that Mr. Trump’s economic agenda might indeed be better for US Americans although we Europeans may suffer from it, but like Mr. Putin who is not the German chancellor, Mr. Trump is trying not to be eaten alive by the Chinese who hold 2 trillion in US treasury bonds.

Regarding geopolitics we can expect that President Trump will take a tough stance and by drawing a line wherever his interests are being challenged probably will make arrangements with President Putin who does the same. If Crimea is Russian and the region in the Baltics and Ukraine a sphere of Russian influence, Mr. Trump won’t change that since Exxon already is cooperating for a long time sucessfully with Gazprom. No reason to start WW III over that.

And, while Mrs. Rodham Clinton who as Secretary of State secretely helped the so called Ismalic State (IS) rise was suggesting a no-fly-zone over Syria that ultimately would have led to direct military confrontation between Russia and NATO, it can be expected that Mr. Trump and Mr. Putin will also find a solution for the joint exploitation of the gas-fields off the coast of Syria. Probably, these two presidents will do more for world peace this way than Nobel Peace laureate Barack Obama did.

Many commentators these days brand the new administration as being contradictive showing no homogenous strategy, but the opposite is true, of course only, if one doesn’t dare to analyse statements from the White House applying the usual tools of diplomatic consistence. If one applies the rule to “think outside of the box” and looks at the straight forward interests of the administration it becomes clear that with Russia, a close partner of Venezuela, the new administration wishes to cooperate while former Exxon – CEO and Secretary of State – appointee Rex Tillerson openly supports “regime change” plans in Venezuela to bring down the democratically elected president. of course, Mr Tillerson who lost an arbitration at the World Bank against Venezuela over confiscated Exxon-assets in the fourth largest oil producer, has also personal reasons for considering intervention but obviously these are the same interests of the new US-government.

And, for us leftist-liberal Europeans who have their own issues with Le Pen, Wilders and other xenophobic right-wing populists the time has come to understand that it is true that self-declared elites living in self-feeding bubbles in Brussels and most of the European financial and political headquarters had gotten it all wrong because they neglected the real people. Income disparity,poverty, brutal capitalism and suddenly a refugee crisis has left us choose between a rock and a hard place. All of a sudden, workers have to fear influx of cheap labour by migrants. In this situation people do not start a philosophical debate about reasons for refugees to swim to us or whether the culminating migration was designed to destabilise our societies in an asymetric war by challenging our moral values and democratic principles.

Truth is that mainstream media, political and economic elites, their consultants and analysts all got it wrong and now are waking up. They blame voters and populists instead of taking their own hearts into their hands and admit that they have governed for too long against us ordinary citizens.

Instead of drawing logic conclusions of the voter-misbehaviour, elites are branding the messengers as “fakenews”, “populists”, “Putinists” or “conspiracy theorists”. But, it won’t help to censor the Internet or Facebook as people are increasingly aware of what is going on and will rise, not vote. Some of those who are forced to choose may choose to fight.

Last weekend, Mr. Soros ordered 403 organisations that he finances to march in protest against Mr. Trump. The official website of Women’s March lists 158 supporters of which 56 are directly linked to Mr. Soros. The New York Times also wondered what Mr. Soros was up to and how partisan he was.

When one thinks it couldn’t get worse, there is almost certainly another blow to be dealt: last weekend’s absolutely worldwide spontaneous march against the Trump-presidency is also being sponsored by another Soros-entreprise, an abortion clinic, Planned Parenthood, that was selling embryo-tissue for research to pharmaceutical companies.

Isn’t it time to stop ‘Women’s March’ if it is proven to be so corrupt? Does one really want to campaign at the side of a Soros against a certainly controversial president by all, really all, even undemocratic, means that will not allow one’s selves to look into the mirror?

Since Mr. Trump’s election and especially since his inauguration Postmodernism is suddenly being discussed again but one should rather call the Obama-Clinton style of soft aggressiveness as surreal since vagueness of Postmodernism and the 1968er baby boomer’s political frustration led to Surrealism as cultural logic of late capitalism making the transition from Obama to Trump appear like Realism.

These are not god-made givens or natural catastrophies but the result of an economic system made by mankind that is based on exclusion and violence, profit maximisation and everlasting growth at any price. Socialism in it’s end-phase has been a full scale crisis on all levels of society. Capitalism produces permanently crisises which makes it running. If the price for keeping this dreadful system alive is that one accepts devastating growth, war and social exclusion one should not negotiate about the price but question the system in it’s entirety.

Solcialism has been about centralisation, Capitalism about concentration. Socialism imploded, Capitalism explodes.