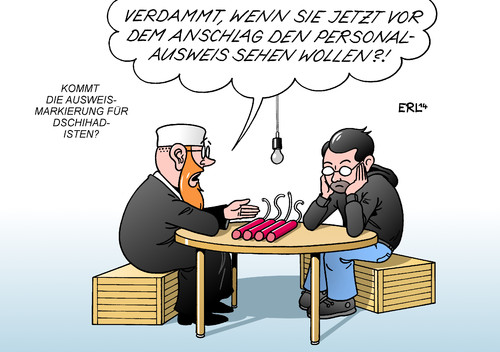 Germany: humor not a matter of laughing. “Don’t forget your ID when going to work as a jihadist!”

48 hours after the terror-attack at Berlin’s Gedächtniskirche, German authorities, assisted by mainstream media, deliver a rather chaotic image.

Firstly, a person described by several eye-witnesses as an Eastern European allegedly being the driver of the truck that was deliberately stirred into the populated Christmas market in West-Berlin’s city center, had been followed when fleeing from the scene and got arrested near the Victory Column, one and a half mile away.

Mainstream media had it around midnight that the suspect was a refugee from Pakistan. But, this man had to be released after 24 hours without charge as no blood, DNA or gun shot residue were be detected at the suspect.

Meanwhile, the fascist founder of the islamophob movement “Patriotische Europäer gegen die Islamisierung des Abendlandes (PEGIDA)” – (“European Patriots against the Islamification of the Occident”), Lutz Bachmann, alsways being suspected to be a collaborator with Germany’s domestic secret service, the Verfassungsschutz (office for protecting the constitution), sent out a twitter message just one hour after the attack claiming that German security circles had confided to him that the suspect was a Tunisian islamist. 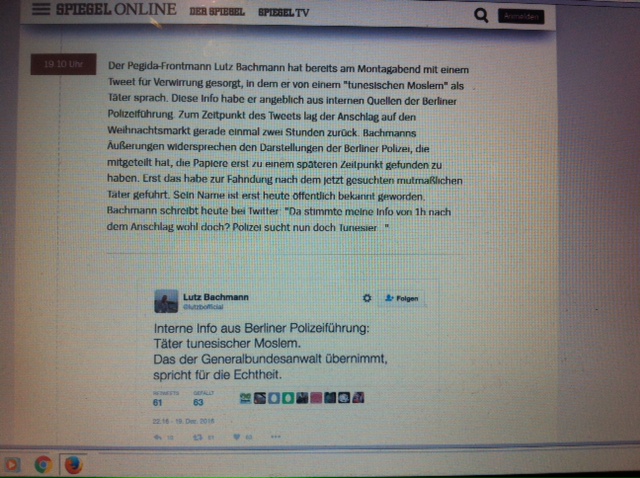 Although special police forces and crime scene experts were searching the truck thoroughly the official version claims that a wallet carrying the personal identification documents of the suspect has been found only during the next day, supposedly identifying the assasin as tunisian refugee Aniz A. who had been observed by German authorities for several months of this year until September for alleged connections to jihadist movements.

The US-supported jihadist organisation Islamic State (IS) only reluctantly claimed responsibility for the Berlin-attack 36 hours later and without giving any details or posting video messages as custom practice by the group.

According to german First TV channel ARD, Aniz A. had contact with two preachers of a muslim jihadist group in Hildesheim, northern german state of Lower Saxony (Niedersachsen). The tv report also confirmed that an undercover agent who infiltrated the jihadist group had warned the authorities of an attack to be carried out “soonest”.

Like in previous cases of planned jihadism in Germany agents of the domestic secret service observed the suspect over many months. This also applied to the Paris and Brussels attacks in the recent two years. Stunning that authorities always seem to know quite accurately and manage to “find” the necessary evidence as well as proper IDs.

So far, Germany has never experienced any terror attacks by foreign nationals but plenty of right wing and Neo-Nazi – terror. The trial against leader of the “Nationalsozialistischer Untergrund (NSU)” (national-socialist subversive group “NSU”), Beate Zschäpe, is still going on after two and a half years in München while more and more secret service support for the group that killed at least 14 foreigners and one police woman in Germany is being revealed. The domestic secret service Verfassungsschutz shredded files in order to cover up it’s activities and thus was found to withhold relevant evidence from the court.

But, in previous cases it also transpired that one of the undercover agents exploring the Sauerland Gruppe posing there as local al-Qaida chief had been linked to the US’ CIA.

In the present case, it is being said by Mainstream Media that the tunisian suspect used up to six identities, one had been “al Masri”. It becomes probable that the purse with the German refugee ID card has been placed by the authorities themselves in order to mislead the public.

Mossad-Terror Expert Shlomo Shpiro, a scholar at Bar-Ilan-University in Tel Aviv, told German news channel n-tv that he had been just minutes before at Breitscheidplatz, but he did not reveal what he had observed there, so it might just be a coincidence.

US President-elect Donald Trump reiterated minutes after the attack in Berlin that islamists were killing Christians everywhere in the world. One may wonder how he could know about the attack as German police at first only reported a traffic accident.

In a new development on 28th and 29th December 2016, it transpired that an undercover police agent had ‘accompanied’ the alleged assasin, Anis Amri, over a long period in order to observe him, as German First Channel ARD in it’s “Report München” magazine reported. This would raise the question why this surveillance had been given up although Anis Amri, according to a police file quoted from by ARD’s “Brennpunkt” special edition, cited a plan by Anis Amri confided with the undercover police agent to commit a terror attack using explosives and an AK47 machine gun. The file, the TV report is quoting from, has been established as early as end of 2015  by the federal state criminal prosecution office in the state of Northrine Westphalia according to which Anis Amri has been driven by a secret informant of the bureau for protecting the constitution (“Verfassungsschutz”) in February and March on several occasions from Dortmund to Berlin.

The TV report quotes from the police file: “He was driven by the informant which he told that he wanted to kill in the sense Allah wanted it.” Following this statement Anis Amri got under 24/7 surveillance in Berlin until end of September 2016.

On 28 December 2016, the Federal Prosecutors arrested another Tunisian man who allegedly was a contact person for Anis Amri. This person is said to have been contacted prior to the attack by Anis Amri. Supposedly, he sent photos and voice messages minutes before his attack to this person.

Suspiciously, there is nothing said about the Polish driver of the hijacked truck, who was sitting in the passenger’s seat in the cabin but he must have kept quiet during the recording of the voice messages. According to FOCUS magazine the investigators assume now that the Polish man was already dead minutes before the terror attack. This is a clear contradiction to GPS data that proves that the truck has circled the Breitscheid place three times as well as eye witness reports that said that both men still were alive when the truck was stirred into the crowd. In addition to that several eye witnesses had described the two men as eastern European by outward appearance.

If Anis Amri had taken the Polish driver hostage he would not very likely be able to make phone calls and record voice messages while driving the truck and keeping the Polish man at bay unless putting a gun at his head, but who was then driving the truck?!

The 40 year old Tunisian man who got arrested on 28th December 2016 got released without charge a day later. It was said that he was not the person being contacted minutes before the deadly attack by Anis Amri. Was he the undercover policeman or was he even his instructor acting like in a classical Agent Provocateur – manner?

Has this contact person or undercover police agent assisted Anis Amri when fleeing the crime scene?

Also the pro-western CIA-partner secret service in Maroc knew about Anis Amri, Reuters reported, but it was not clear yet whether he had worked for that service and how much time he spent in Maroc.

Nevertheless, the Maroccan secret service had warned the German authorities weeks before the terror attack about Anis Amri and even gave a hint to his camouflage address in Dortmund as well as his mobile phone number. The German authorities also knew about several camouflage identities used by Anis Amri and launched an official investigation into social welfare fraud.

But, several camouflage identities are the usual tools of secret agents and informants.

The similiarities to Germany’s biggest ever secret service and police agent – scandal, the NSU-complex are striking.

Despite knowing about the use of several camouflage identities the Federal Office for Migration and Refugees (“BAMF”) continued to run his file under a false name. SPIEGEL magazine reported that this was so at the request of the German federal government’s central anti-terror office “Gemeinsames Terrorabwehrzentrum (GTAZ)” in order “to make him feel undetected”.

Conspiracies are not Theories

by Ralph T. Niemeyer Why else do completely intelligent, thoughtful and rational-thinking people resist the claim that sociopaths conspire to manipulate and deceive them?…