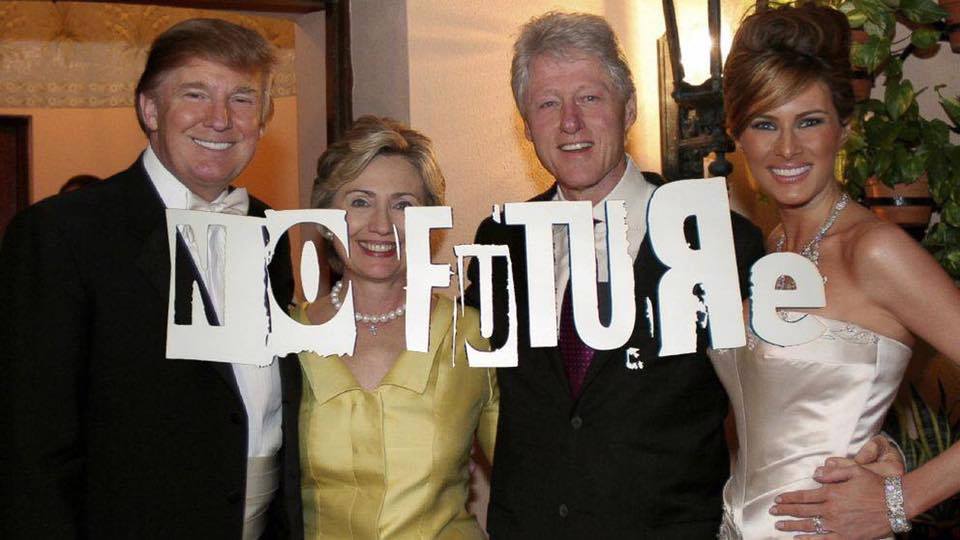 George’s Sorrows: US – Dynasties Trump and Clinton: Elections in the US are not about politics, it seems

Documentary filmmaker and Academy Award laureate Michael Moore made a film about Republican Party (GOP, not GROPE!) presidential candidate Donald Trump but one may wonder whether this is not too one-sided. Is Michael Moore supporting former first lady, Democratic Nominee Hillary Rodham – Clinton who failed to win the majority of delegates in the primaries, and if so, why? Does he honestly believe to have a democratic choice or even an alternative in this election?

Imagine, Russian President Putin had a son and would pave the way for him to become president, or make his wife, ex-wife or girlfriend assume power during or after his reign, US Americans would be the first ones to cry Nepotism and threaten to use nukes.

We all remember the presumably stolen election in 2000 when Al Gore failed to prove that a chad was a chad and not a dimple whereas he and his team should have instead concentrated on examining the postal stamp on the overseas votes of which indeed a majority had been in his favour. At that time the entire world was laughing about the United States of America as the self-declared watchdog over freedom and democracy for the rest of the world made it appear appropriate to have UN observers be sent to Florida.

Now, 16 years later there might be reason to think that the election again could get rigged, this time around by the democrats as in 16 states the electronic ballot machines are being supplied by a the british company Smartmatic Group owned by declared Clinton-supporter multi-billionaire George Soros. The oligarch is friends with the CEO of Smartmatic, Lord Mark Malloch-Brown, who is also a member of the board of Soros’ “Open Society Foundation” which is known for destabilising other countries.

In these disctricts, like in increasingly many others since the 2004 election that probably was rigged against democratic candidate John Kerry in the state of Ohio, no print-outs of the ballot paper the voter has filed electronically, will be provided, making it easy to manipulate the outcome. The “Rolling Stones Magazine” recently reported that evidence was pointing at a faked result favoring President George W. Bush.

A full scale investigation into the 2004 election has been blocked by the Republican party majority in both houses of Congress.

At that time the voting machines were provided by Bush-friend Mark O’Dell who maintained that it was impossible to manipulate voting machines, a claim that was immediately rebuked by IT professor Avi Rubin categorically. Professor Rubin stated that it was very easy to manipulate the software of these machines and by this the outcome of the election in a big scale without leaving any trace as printouts of the voter’s intentions were not provided.

About a third of the votes in the US are being cast solely electronically.

One may wonder why candidates spend billions of Dollars in trying to win an election if it can be done so efficiently? And, why would candidates undergo such an enormous stress having their public standing be diminished and their reputation ruined? The answer is easy: in the US elections are not about politics but shere entertainment and that is worth billions.

But, it is also possible that neither candidate will win the absolute majority of votes in the electoral college if independent candidate Evan McMullin, a former CIA Agent and Goldman Sachs investment banker, wins the state of Utah. Then, it would be possible that like in 1825 the President would be elected by the House of Representatives and the Vice – President by the Senat. As divided as the US nowadays are this young candidate could be the choice of the establishment if a compromise candidate has to be found who brings back some dignity to politics.

In 1825, Congress voted for President John Quincy Adams after the electoral college was in a tie between Andrew Jackson, William Crawford and John Adams JR. Given the fact that many Republicans but also Democrats got disenfranchised with their respective candidates, this scenario could be an elegant way out making sure that Wallstreet got it right again.

Western Free Democracies in capitalistic societies drew their moral superiority over Socialism from the fact that one could trust their institutions to be truly democratic and lawful. If the rule of law and the unbias counting of votes no longer matter, like one can fear for the United States right now, there is nothing to win or to loose for nobody.

The recounts in Michigan confirmed the alleged manipulation in favour of Mrs. Rodham Clinton.

Coup-like events allegedly involving “refugees” force Mrs. Merkel to U-turn in migration policy A Comment by Ralph T. Niemeyer It has been merely a…