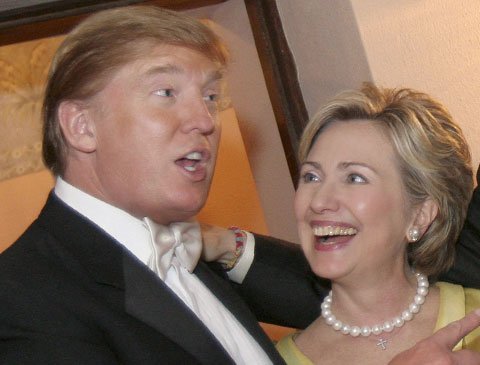 Mocking voters: like at ESC, only Superdelegates decide, not general public

Independent Journalism in a democracy is a myth, of course, this is neither a surprising nor a new observation, but what Associated Press did in calling the day before night fell in California is the desperate attempt by the establishment in the United States of America to get it their way no matter what it costs.

Owners of mainstream media had picked their candidates a long time ago already, an oligarch who inherited and stole all his wealth versus a woman who made more money with hedge funds and speculation on the back of blue collar voters than she ever did as being First Lady or Senator.

Despite mainstream media’s brainwashing all polls signal at the moment that Senator Bernie Sanders would be much more likely to win the presidency against the Wall Street-fraudster than the Super-Delegates’ front – runner.

Fact is that Mrs. Clinton can’t reach the majority of pledged delegates anymore. Necessary for nomination as Democratic Party candidate are 2,383 of which she currently has 2,184 while in the last primaries only 158 more are to be pledged. Even if she won 100% of these and Bernie Sanders none, she would not make it.She will always be at least 41 delegates short.

For Senator Sanders it is of course even more impossible to cross the finishing line as he so far accounts for 1804 pledged delegates. So only so called “Super Delegates” will decide at the end who the presidential nominee will be. What a disgrace for a democracy!

The solution would be very easy and bribingly democratic: one ought to abolish the super delegate – system and instead have the winner be determined by the popular vote or if one really wants to have a system of proportional representation, the majority of delegates of a state. At this time it would also only be fair to abolish another rule: that of “the winner takes it all” that is still valid in quite a few states and which is also anti-democratic.

Mrs. Clinton would probably be the candidate under the new rules as well, but at least her nomination would not smell.

So, the Republicans don’t have that problem anymore this year, but also their system would need an overhaul. Only reason for the super delegates – system to be in place is to for the establishment to make sure they can turn over any popular vote that does not suit these exclusive circles. But, Mr. Trump is proof that also the system of behind the scenes meddling does not work. Since Mr. Trump is still holding primaries although he is the only one on the ballot paper,  and Mrs. Clinton not able to win the majority of pledged delegates, they both in their own way show how rotten the system is.

Even if Mrs. Clinton is winning the Democratic Party nomination by whatever means, her candidacy won’t be without serious trouble as also Wikileaks announced further revelations about her. The only question that arises, of cours, is why Wikileaks is waiting until Mrs. Clinton is officially nominated leaving no room for “Superdelegates” to shift to Senator Sanders?

And, overseas, in Germany, news broke that the Clintons had received record high millions of Dollars in “fees” from Deutsche Bank AG which is in the docks for fraud and under investigation by the SEC. It should be investigated under campaign finance aspects what these foreign payments are really about.

And, the British Guardian revealed that Bill, Hillary and Chelsea Clinton received some 81 million US-Dollars for their offshore foundation from dubious HSBC Bank in Geneva. The Clinton-Foundation did not followed any transparency rules and also may have used funds for rather non-charitable purposes, a report suggests. In any Non-OECD-country one would speak outright of bribes.

One may wonder why the two Wall Street – protégés are not teaming up and becoming running mates against “Occupy-Wall Street” – Bernie? At least that would be logic and give US voters a real choice.

Socialism, we painfully learnt in East-Germany provided for an alternative, but not a political choice, with Capitalism it is the other way around.