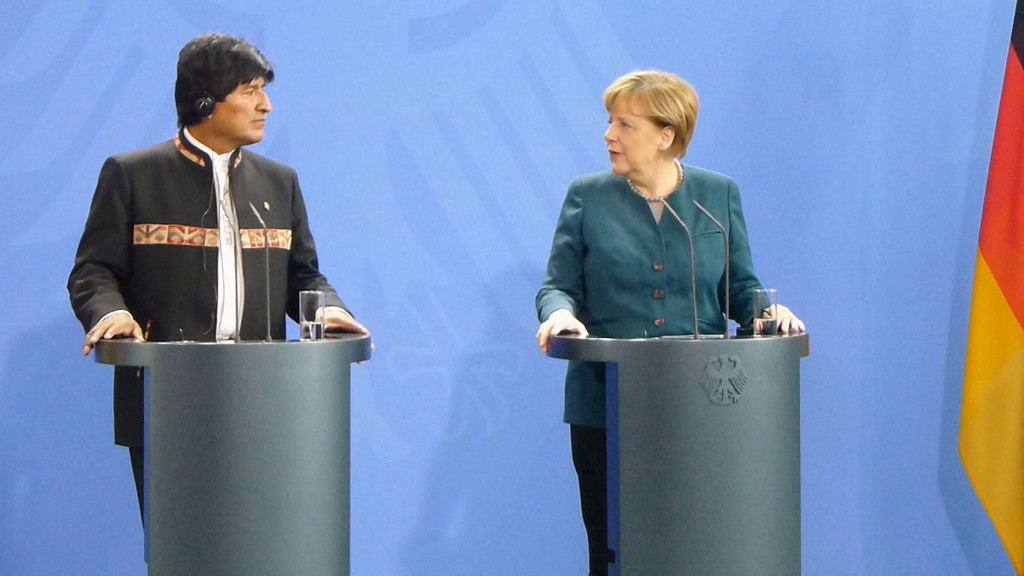 Evo Morales: “Revolution in 21st century is done by education, not weapons.” Photo by Karl Ringena

Bolivian President Evo Morales visited this week Germany following an invitation by German Chancellor Angela Merkel.
Eyebrows in Berlin certainly rose when the president of the plurinational state of Bolivia, a declared Socialist, raised his left hand formed to a fist, the socialist internationalist’s traditional symbolic gesture, while listening to the national anthem together with Mrs. Merkel played by the German Bundeswehr’s guard of honour. When the German anthem was being played, Mr Morales stood straight as other visitors to the German chancellery would normally also do.

Mrs. Merkel, in her student years quite an active propagandist for the youth organisation of East Germany’s Socialist Unity Party (SED), seemed not to take note of her guest’s gesture.

After the brief ceremony, Chancellor Merkel and President Morales had a working lunch at which concrete cooperations have been discussed, mainly in the areas of renewable energy and water purification. Siemens AG and other German enterprises had expressed interest in selling their technology to Bolivia.
Economically, the socialist country has made quite impressive progress as also Mrs. Merkel, a 1989 turncoat ex-socialist who learnt in 1990 quickly how to become a conservative, acknowledged in the press conference after the meeting.
It transpired that German industries had whispered into the ears of the chancellor once US corporations seemed to loose their grip on the South American nation when Mr. Morales pushed for nationalisation of the oil and gas business and took a hostile stance towards the North American Free Trade agreements. Like in Venezuela provocations by the US-led opposition ended in expelling the US’s agents.

Asked what Germany could learn from Bolivia that is taking a very different approach when dealing with the US, Mrs. Merkel, who learnt during the NSA scandal through revelations by Edward Snowden, that her phone was tapped by the big brother across the pond, and also could not keep the US military from coordinating their drone-war from Ramstein air base which also raises the question of Germany’s sovereignity, offered a range of typical „Merkelisms“ she is famous for trying to avoid a clear answer.

Emphasising that Germany and Bolivia were on different stages of development she reiterated that Germany was providing development aid to a number of countries (although Bolivia is not a receiving nation of such) and that good results were seen within 9 or 10 years but that in other parts of the world, i.e. in Africa although it is quite questionable what good those peanuts well below the agreed level of 0.7% of GDP, the so called “UN-Millennium Goals” do in Africa whereas a true fair trade agreement could prove to be prudent, this was not self-evident. Quite a non-logic comparison for a woman like Mrs. Merkel who is holding down a PhD in Physics.
Later, at the Technical University of Berlin, a world reknown academic institution, President Morales who became an honorary member of the Alma Mater and signed a student exchange program into effect, commnented when being asked how he prepared to defend against potential coup d’états that it only became quiet and politically stable after he declared the US Ambassador ‚persona non grata‘.
Germany can’t even guarantee Edward Snowden free passage in order to invite him for interrogation by the German Bundestag’s NSA-investigation committee.

Germany, until today, failed to negotiate a peace treaty with the 4 allied powers that won WWII although the Soviet Union had offered such.

Watch the short version of the Film “FACTOR EVO” here:

Is China winning in the hybrid-war with the U.S.?   A comment by Ralph T. Niemeyer  The action of the authorities worldwide suggest that…