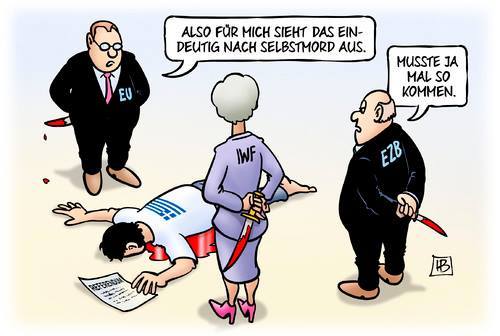 Today’s results from the Greek referendum will be collected and analysed by a private company that in the past was dealing with military and secret service tasks by NATO and the Greek ministry of defence, and claims on it’s won website to have worked in all elections since 1981 for the ministry of the interior.

The company, SInguLarLogic with seat in Athens is part of the Marifin Investments Group (MIG) which had been taken over on 18 December 2014 by the US-based investment firm Kohlberg

, Kravis, Roberts & Co. (KKR) which in 2010 hired 9 former top managers of Goldman Sachs and also is otherwise still very close to said investment firm that is to a lrage degree responsible for the Greek debt

KKR and Goldman Sachs are, according to German Handelsblatt direct businesspartners and “managed” like good partners in crime several transactions, the last known one with Kion shares.

Henry R. Kravis, one of the owners of the hedgefund, was this year one of the guests at the infamous Bilderberg Conference.

that are comparable with classical Ponzi-schemes.

It could, of course, also be, that the US once and for all wants the Euro to disappear in turmoil and for this reason has an interest in the victory of the OXI (No) – camp.

Only when the result is very clear manipulations will not help.

In any case, the question is whether the Greek government is fully in control of the referendum and can trust the private companies involved or not.

And, of course, whether Prime Minister Alexis Tsipras really wants to ‘win’ the referendum or whether he doesn’t in fact hope to loose it?

New rules for investing €325 billion in regional development projects across the EU in 2014-2020 were approved by the Regional Development Committee on Wednesday….