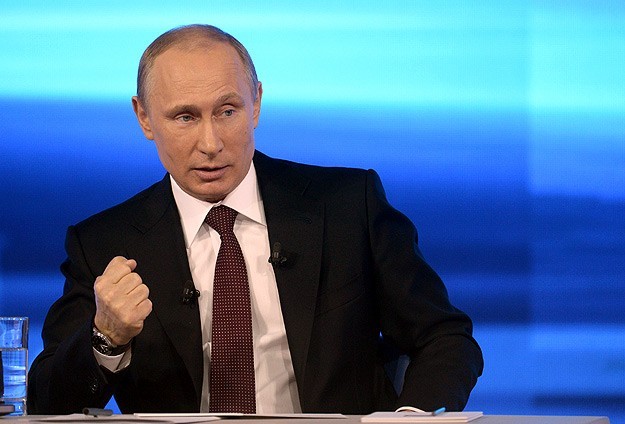 Over the past days Western World mainstream media seemed to suffer from premature ejaculation when it came to comment on Russian President Vladimir Putin’s potential demise or illness, or even more dramatic scenarios that resulted from a few days of no pubblic appearances of the Russian leader.

When some rather dubious media outlets in Russia claimed that the president hat ordered journalists not to leave the capital for the weekend and to be ready for important news, some of the Western tabloids speculated that he might announce that he has become a father.

Well, so far so good, in the UK or the Netherlands, maybe also in Spain, it would make headline news days before when the kings and princesses expect an heir to the throne, but not so in Russia where the president’s private life was kept a secret except for the fact that he and Mrs. Putin decided to get divorced in 2013.

All this would not be important enough to ask journalists to stand-by. News to be spread on the anniversary of the peaceful hometaking of Crimea could mean a new military strategy to be announced if that had not just been the matter anyhow. So, journalists kept scratching their heads over the weekend, could it be that the Kremlin was making the world ready for?

It now transpired that it will not be anything of the aforementioned but a real big blow: President Putin will announce in the near future that oil and gas will no longer be traded in Dollars at all, but in a new rather artificial currency crafted by the People’s Republic of China holding 2.5 trillion of US Dollars in treasury notes and Russia accounting for 430 billion US Dollar reserves.

This, indeed, is a frightening news for the US and it’s allies which for quite some time were seeking to destabilize Russia by keeping the oil and gas prices artificially low.

But, President Putin used the Rouble depreciation for buying up foreign held stocks of Russian companies cheaply and by this gained 20 billion US-Dollars while enhancing the Russian economy by repatriating stocks and capital from abroad.

The United States, overly indebted by 108% towards it’s GDP, and also for this reason causing military interventions world wide, so far has been the only country that could diminish it’s debts by printing endlessly money without causing hyper-inflation because every little dictator in Africa, Latin America and Asia was dependent on the US currency in terms of trade.

Russia that only accounts for a state to GDP debt ratio of 13% and China could easily finish with the US on basis of their wealth and the US’s heavy debt-burdens.

But, would that be a film these governments would really want to watch? Wouldn’t that mean to risk their own assets, as said above, the 430 billion Dollars Russia is holding  or the 2.5 trillion USD China is sitting on? If the US crashed completely this would also diminish Russian and Chinese reserves.

Maybe that’s why the anouncement is being made on a Sunday and not a Monday. Markets would be ready to take the news without overreacting and getting mechanisms in place to avert the worst.

In any case, a new world order will arrive, not an American dominated one, though, but rather a Eastern one for which also Germany would be an interesting partner.

The substance used on Sergei Skripal was an agent called BZ, according to Swiss state Spiez lab, the Russian foreign minister said. The…