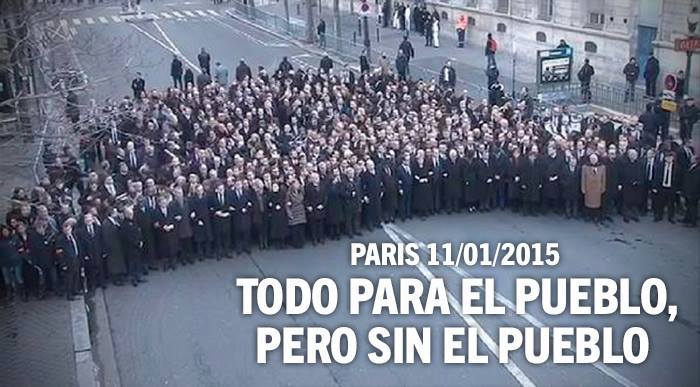 A Comment by Ralph T. Niemeyer In politics, especially in geo-politics, intrigues, undercover-, false flag- and agent provocateur – actions are applied as strategies like on a snooker table. It is often hard to establish what truth is and what only shines or is being made up by media. That’s why citizens ought to question the official versions of truth in a reasonable way and put the question “cui bono”, the classical tool of good journalists asking first who benefits from a certain situation like a surprise attack, in front of their minds before loosing same.

It is also prudent, especially in the age of digitalization, to be able not only to count from 0 to 1 but also see the invisible lines on the snooker table.

In the present case the French media has it that the terrorists acted in a military – style of precision when excecuting journalists and a police office who laid wounded on the street (Le Figaro)  and German SPIEGEL magazine added that it was appearing like the beheadings shown in videos by British secret agents fighting for the so called Islamic State in Syria (ISIS), a rebel organization financed, trained and equipped by the US’ CIA, British, French and Saudi Arabian “security” agencies. As in any war, media plays a crucial role in preparing the ground for xenophobic or nationalistic attacks and also the sentiment these leave behind. A few years ago carricatures of the Prophet Mohammed, also meant satirical although quite distasteful, had been re-published by the Danish newspaper Jyllands Posten that in the 1930ies had openly supported Hitler lead to mass outrage among Muslims, the burning of the Danish flag outside embassies in Arab countries and an import-ban for Danish butter imposed by Egypt, but no terrorist attacks and killings.   Yesterday’s attacks are showing a totally different reaction if it were really “Islamists” who were outraged over carricatures that fall under the fundamental right to freedom of speech and expression. But, maybe those attackers are as much “Islamists” as the Norwegian mass murderer Breivik sees himself as a “Christian”. This example also shows how stupid it would be to hold all Muslims responsible for the crimes committed by a few who claim to act in the name of Allah as otherwise all Christians had to be condemned after Breivik’s deeds. Later, when the “Islamists” were identified because these so clever and brutal appearing terrorists had been so stupid to carry their IDs to the crime-scene, thus leaving a trace like a hord of elephants last seen in the 9-11 terror attacks, commentators worldwide were quick to announce that the attack by Islamists were water on the mills of neo-fascists like Marine Le Pen or the German ultra-rightwing movement PEGIDA (Patriotic Europeans against the Islimization of the Occident) that suddenly popped up like mushrooms.   In Germany, the seed for anti-Islamism had been laid already many years ago by mainstream media that was always showing kind of sympathy with the xenophobic nationalism that brought neo-fascist parties such as Deutsche Volksunion (DVU) or Republikaner (REP) and Nationalpartei Deutschlands (NPD) into state parliaments by warning voters to vote for those parties while at the same time telling voters that this would be the only way their concerns would be heard.

Voters are not that stupid not to see this as an invitation to vote for neo-fascists in an election although they might not agree with their political agenda. One calls this in Germany Protestwahl (protest vote).

It is, of course, true that those dark movements suck honey from attacks like in Paris but may be that was exactly what had been the intention behind those who orchestrated and ordered the executions? If the attackers were acting like soldiers then it is only logic to ask who their commanders are, ain’t it? The question “cui bono” leads us also to the possibility that an immensely unpopular French president is been given the opportunity to distract attention from his malperforming governing and divert it to the fight against “ISIS” (or “IS” as Western media now calls their creation in order to make it appear less guided by their own secret services that aimed to overthrow the Syrian regime by it). In lieu of the history of  false flag attacks carried out by the French state, kind of the ‘motherland’ for Agent Provocateurism one should scrutinize carefully all official information since it is only 30 years ago that French President Francois Mitterrand had ordered the Deuxieme Bureau, France’s secret service, to plant bombs at Greenpeace’s vessel “Rainbow Warrior”.

Whoever is responsible for the terror attack has to be brought to justice, especially in case it transpires that secret services were involved acting as agent provocateur.

And, remember, a study by university of California recently found that there were no such attacks on US soil without some kind of involvement of state agencies. I would expect this to be true for any other imperialistic country as well, so an independent investigation is necessary given the French state’s history in this area. Like in the “9-11” terror attacks from New York and Washington mainstream media wants to make people believe the most unlogic version of truth rather than asking critical questions about the probability that terrorists who otherwise act professionally with military discipline and brutality are so stupid to leave a trace like a hord of elephants behind “loosing” their ID cards at the crime-scene.

Another conspiracy theory is ranking around the fact that France’s National Assembly on 2nd December 2014 overwhelmingly voted in favour of recognition of Palestine as independent state. Now, the French government is asked to put this into motion let become effective.

Prime Minister Netanyahu of Israel had earlier on 07th August 2014, warned in an interview that France would see a lot of terrorism if it went ahead with recognizing Palestine.

We should keep cool hearts among the emotions and not let the brutal attack become a justification to go to war against Muslims, or to allow our governments to make us believe an increased surveillance and “Big Brother” was the answer. Our answer can only be more democracy and more freedom, especially that of speech!

Also, the official version has to be corrected. An eye witness described the “terrorists” as tall but Saïd Kouachi whose ID card was found was only 1,69m and his brother Chérif 1,74m. The third person, accused of having been the driver, the 18 years old Hamyd Mourad was not in Paris during the time of the attack but in his school in Charleville-Mézières near the Belgian border. Classmates say that he was with them all day in school. The official version does not add up. One may wonder what stories the French government is coming up with next. It is clear, however, that French policemen today shot dead Saïd and Chérif Kouachi.

French Parliament votes in favour of recognition of Palestine as state

Satire is allowed to do anything

Is more surveillance and Big Brother the answer?!

cartoon featuring german federal president Joachim Gauck A Comment by Ralph T. Niemeyer “The fact that there are fallen soldiers again is hard to…