A comment by Ralph T. Niemeyer, currently in Moscow

Flatscreen TV sets, other costly electronic goods, cars and any other durable good are bought-up in shops in all major cities in Russia today as the population collectively feels reminded of the chaotic late nineties when a conspiracy between at that time Russian president Boris Yeltsin, the Club of Paris group of western banks and the IMF forced Russia down to it’s knees .

Mr. Yeltsin, during the waning days of the Soviet Union, had promised western banks to open the Russian market indiscriminantly, unconditionally and immediately if they withdrew their support from Soviet President Mikhail S. Gorbachev and put everything behind him.

Mr. Gorbachev told me at the G7 in summer of 1991 in an interview that these were the demands from the Western free democracies and when I asked what would happen if he rejected that he admitted that this would mean the end of the Soviet Union and probably also of Russia. 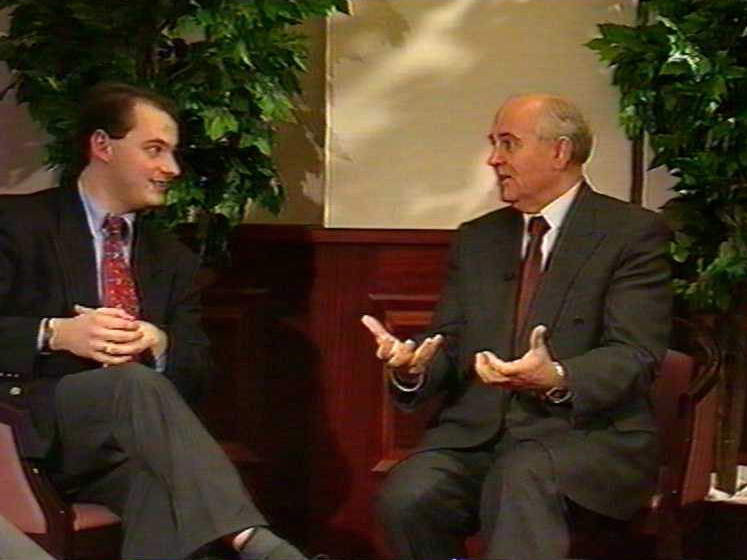 USSR-President Mikhail S. Gorbachev during one of our interviews in 1991

A few years later we witnessed that the prophesy of Mr. Gorbachev came true. Unfortunate for him, the Russian population forgot completely that it was Mr. Yeltsin who played the nationalistic card and negotiated behind Mr. Gorbachev’s back with Jeffrey Sachs (IMF) and western oligarchs the selling – off of Russia.

An de-industrialisation-wave swept through Russia in the earl nineties while mafia privatised any lucrative state asset among it Russia’s silver cutlery into their pockets.

Almost over night, some 70,000 industrial entreprises disappeared while unemployment rates and alcohol consumption skyrocketed leading to a drastic decline of standard of living for the vast majority of Russians and a drop in birth rate and life expectancy to only 58 years for men.

Oligarchs like Boris Abramovich Berezovsky posed a political threat to Mr. Putin who managed to get oil and gas business under control by nationalising Gazprom that is granting Putin-friendly oligarchs who operate their offshore trading companies from Prague and Cyprus 30% discounts in transfer pricing deals that deprive the Russian state of badly needed corporate taxes. Berezovsky fled from Russia and bought with his accumulated billions English football clubs.

Mikhail Khodorkovsky instead, also a dubious figure who became an oligarch by the corrupt Yeltsin-administration’s privatisations, decided to stay in Russia and launched a political carreer in order to cover up his mafia-style of business. As he challenged President Putin over and over again the authorities applied the full legal code and put him to prison for crimes that many others also commit.

Now, today’s Ruble – crisis can be seen as a result of the malfunctioning of the Russian economy that over twenty years was too much reliant on the selling of resources and a building boom that let prices for property and infrastructure hit the ceiling leading to hyper inflation.

This unhealthy development has been foreseeable but nevertheless the Russian government acted too slow to invest into real production that is the basis for any productivity. To sell oil and gas and to import most goods is not good enough to make a country strong and an economy viable.

The overvalued Ruble that resulted from high oil- and gasprices kept Putin-friendly oligarchs and their nomenklatura happy but this bubble now bursts.

Too little too late one could say did President Putin launch initiatives to increase the state-quota by investing into producing industries. The loss of know how and production sites can not be made undone in just a short time.

On top of that the neo-liberal oligarch-friendly central bank chairwoman Elvira Nabiullina stood in Mr. Putin’s way. He only kept her in the position to pacify the oligarchs. Now, he may kill two birds with only one stone: Mrs. Nabiullina’s helplessly desperate appearing move to raise the interest rate to 17% created a chaos for which hardly the West and the sanctions can be blamed.

But, may be it is part of a strategy by the Kremlin to bring things to the boiling point at which oligarchs who got already nervous when the oil and gas prices fell increased their pressure on President Putin now fear to loose vast amounts of their wealth and by this power.

And, in an elegant way, Mr. Putin has devalued the Rouble and by this made Russian products and services much more competitive while enabling Russian industries and banks to buy back shares from foreign owners at a cheap rate.

Putin will become stronger and can divert funds into producing industries of the real economy helping Russia advance in the long term. The oligarchs won’t be able to stop him but one should not make the mistake many western European leftists do by glorifying Mr. Putin over standing his ground in the Syrian- and Ukrainian crisis. He is anything but a socialist as also his government still privatises many industries to the benefit of their own class.

Russia counterstrikes, one can see now, as the West is being punished for imposing sanctions. When Russia is selling it’s 430 billion USD currency reserves China will do the same with the 2 trillion USD it holds leading to immediate bankruptcy of the over-indebted United States of America. That, of course is a film also China would not want to watch.

Generally, Russia is standing tall by it’s low debt to GDP ratio of only 13% other than the US for instance with their 101% debt to GDP ratio. Also Germany by recording 76% debts to GDP violating the 60% – Maastricht criteria, does not look too good and Japan especially with it’s 227% debt to GDP ratio is a lost case anyhow, so one may wonder where these countries derive their Chutzpah from to try to teach Russia a lesson by excluding the only member of the G8 with reasonably low debts from the ‘noble Club’.

War would be the only way out for the Western nations and indeed we witness not only in Ukraine very aggressive approaches by the US and EU, but also in Western and Eastern Africa. At the Horn of Africa more weapon material is being positioned right now than was used during WWII.

Meanwhile, the right-wing government of Japan under Shenzo Abé, an outspoken pro-nuclear politician, are continuing to accumulate enough weapongrade Plutonium in their 54 atomic power stations in order to obtain the A-bomb. No other reason for continuing with nuclear energy production that is highly unpopular after the Fukushima catastrophe would add up since Japan would not have to rely on nuclear energy at all as a government study from the year 2000 found highlighting the tremendous renewable energy potential.

And, when all atomic reactors were switched off for over a year after the 2011 Fukushima disaster, no ligts went out in Japan, proving that even the most crazy energy-wasting economy of the world could survive easily without nuclear energy.

At the end of 2013 Japan finally signed a military cooperation agreement with Russia, which could be seen as a first step towards a peace treaty. Also, Japan selected a Russian state company, ROS ROA among two others out of 779 participants worldwide in the Fukushima-Water-tender to help clean the contaminated waters. Nevertheless, the US forced the Japanese government to impose sanctions on Russia. A bit absurd, one may think.

Failing to have any peace treaty executed and any apology for WWII extended by Japan to it’s neighbours one can imagine that the Japanese are nervous when they imagine what Korea and China will do with them when they take over the Nippon’s bankrupt economy. It is obvious that the  Western World’s collapsing capitalism  is preparing itself for clashes with China in fighting over resources.

One day these wars might be referred to as the “Proxy World War” as direct confrontations will probably be avoided as these would inevitably lead to a final nuclear war.

Also, the so called western free democracies are loosing in the currency crisis as Russian products and services suddenly become competitive. But, one has reason to fear, all this won’t stop the proxy wars that are under way between all major powers at this time as there is a direct correlation between oil & gas prices  and wars: before a war oil prices soar, during war they jump.

In general, one can say that there is a major geopolitical power reschuffling going on: Putin took Crimea, made it look relatively democratic , without firing a single shot and by this secured for Russia half of the Black Sea’s oil and gas reserves, that are said to be as important as the North Sea. According to international law 200 seamiles (370.4 km) off the shore all resources belong to the very country.

Since Crimea is quite centrally located in the Black Sea, not much of the Ukrainian coast plays a role anymore. So, Putin was quicker than the US, whose Exxon Mobil Corp., the EU’s Royal Dutch Shell Plc and Eni SpA  had (according to Bloomberg News) already invested some 735 million USD in exploring the oil and gas fields.

Now, with the sanctions being in place Putin suggested that one could also lay cooperations in 6 arctic drilling projects between Gazprom and Exxon, Shell, Eni and Norway’s Statoil worth an estimated 900 billion USD on ice, or one would form a joint venture in the Black Sea, too.

That’s why the Crimea is so important for Russia, and that’s why the US planned to take Ukraine, too. The price for Crimea? Cuba and maybe also the covering up of the story what really happend to the Boeing that disappeared in spring 2014 and probably Ukrainian airforce shot down in July 2014.

IS made by US

USA and NATO have created the “Islamic State” aiming to destabilise Syria   by Ralph T. Niemeyer According to Pentagon documents that became public…