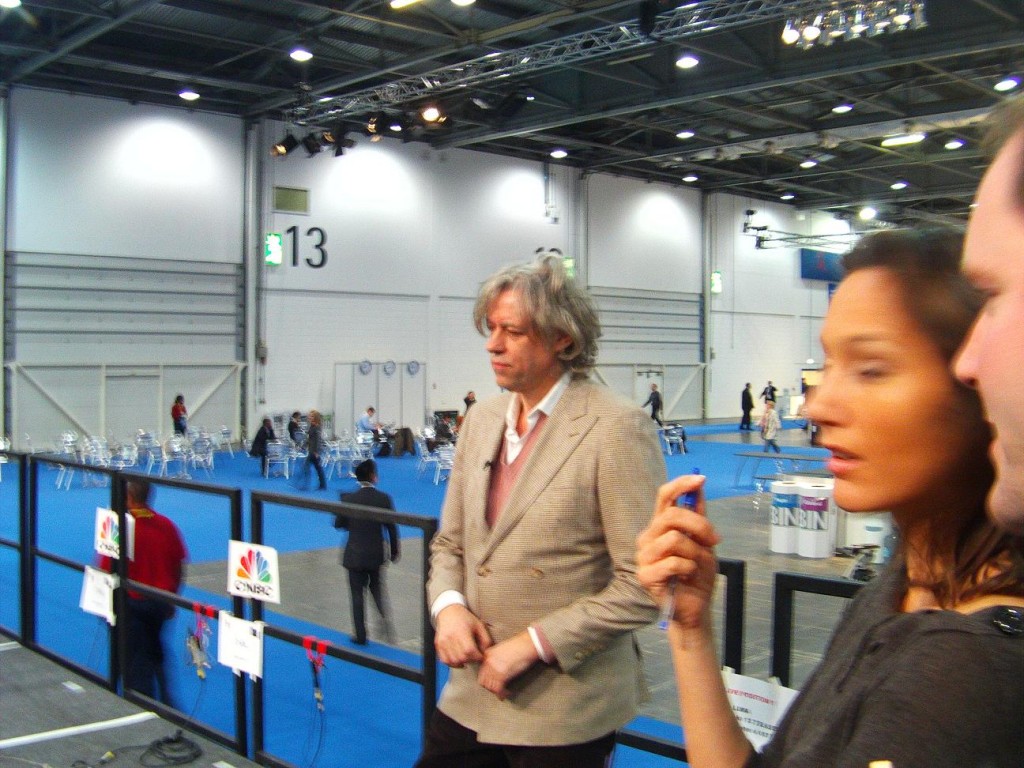 Sir Bob Geldof at the London G20 – Summit in April 2009. Nowadays he is fighting Ebola

Thirty years ago Bob Geldof organised the first “Live-Aid” concert in an attempt to raise awareness for the starving in the world. A noble move by those stars who participated. Then, over the years several remakes of the successful event were launched.

“Poverty can be made history” Knight Bono, frontman of U2, Sir Bob Geldof and Herbert Grönemeyer demanded ahead of the G 8 summit of Gleneagles in 2005 which debt-write-offs had been pre-arranged and therefore had not required the the showdown of the artists with the world leaders.

And, those political leaders were using the limelight provided by the willing media giving the artists an opportunity to volunteer as self-made amateur-politicians. Retrospectively one can only conclude that these amateurs had been cornered by the professionals in a way that professionals usually do it with amateurs in a ring.

Not only has the “success” been minimal by this one billion annual “relief” granted to the High-Poverty-Countries (HIPCs) (and one should ask why the demonstration was not called off if the demands had been fulfilled prior to the “Live8” feel-good-festivals) but even that “success” Bono, Geldof and Grönemeyer celebrated is not certain as the Frankfurter Allgemeine Zeitung (FAZ) noted one week after the event.

A so called “vulture fund” had bought these bad debts and is actively pursuing these through courts in London. The ‘Donegal’ vulture fund bought debts Zambia had accumulated with Romania in 1979. These were 17 million US Dollars back then but with all interests mounted to 55 million US Dollars (a third of the country’s budget for education and healthcare). ‘Donegal’ had bought these debts which supposedly had been written off in 2005 for 3.2 million Dollars in 1999. Thus the “return of investment” for the vulture fund is some 700%.

If Bono, Geldof and Grönemeyer had known that, they would certainly not have thanked Gerhard Schröder and Anthony Blair that enthusiastically. They would rather have started to think about whether their good names were used to cover up a corrupt structure deeply routed in EU bureaucracy and the financial system of our “western free democracies”.

They should rather have asked the old man at the Cape of Good Hope what he thought about the whole story. Nelson Mandela, the moral president of all exploited and discriminated in the world, would have washed their heads if he had found them laying in bed with the wrong bride.

The Nobel Peace Price bearer and former President of the Republic of South Africa has always made it clear how he sees it: “the ‘Rich’ owed to the ‘Poor’” Mandela maintained.

And, he was right: The rich countries who corrupt governments in the so called ‘Third World’ force these countries to tie their currencies to the US Dollar or Euro and by this create a constant influx of capital from those countries.

This even helps the US and UK to finance their adventures in Afghanistan and Iraq where their industries bombed their way through to the natural resources of the Caspian Sea and Persian Gulf. And, Germany and the EU Commission do the same in Africa now.

For some of the participating artists the worldwide concert has paid off as well: According to the “Daily Mirror” all “Live8” artists enjoyed drastic increases in record sales. ‘Best of Pink Floyd’ increased by 1,343% overnight, the CD’s of ‘The Who’ by 863 % plus, ‘Eurhythmics’ by 501%, whereas ‘Madonna’ could only note a sales increase of mere 208%.

Bono, the only one who is still big in business nevertheless used the forum for promoting the U2 world tour, although he would not need to be promoted by anybody, but, he understands as well that he better should not talk too radical as the feel good syndrome should not be underestimated.

One could, for instance, demand fair trade agreements and name the beneficiaries of the “development aid”, of which most are our own industries for whom we open markets by bribing governments in developing countries.

But to expect this from a singer would probably be too much. We, their fans, want to feel that we have done something about the poverty in the world while we zip-away the cocktails in solidarity with those who go hungry.

We want them to give us the feeling that we had rescued the planet. And, we hate those who tell us that the “Make Poverty History” – ‘solidarity bracelets’ we were wearing had been produced by children in China.

The hottest topic nowadays is the “fight against Ebola” so again the mega stars of the music business are uniting under the umbrella of “Band Aid reloaded”.

Let’s wait for the sales statistics of the record labels.

the Tone makes the Music

by Ralph T. Niemeyer Today, on the 8th of May, the day of the capitulation of NAZI-Germany here in West-Germany, and tomorrow on the…