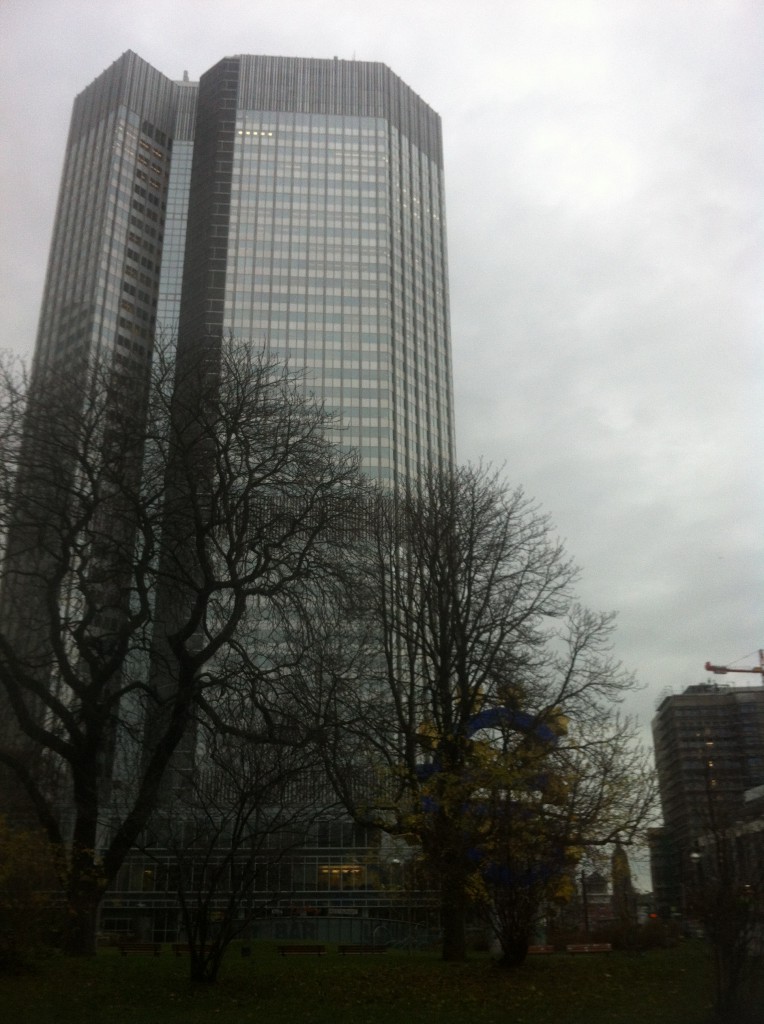 The European Central Bank in December 2013

In December 2013 Brussels but much more so the financial headquarters in Europe and across the Atlantic celebrated the decision by the EU’s finance ministers on the “banking union”. Also the European Parliament in it’s Ferreira – Report adopted on Tuesday of this week manifested the so far biggest ever known institutional fraud in the history of capitalism.

Mainstream media was quick to laud the “banking union” as well as the “resolution fund” as a kind of firewall for the taxpayer and a safeguard to protect ordinary citizen’s savings as well as re-financing facilities for SME’s and the real economy in case a bank needs to be wound up.  The theory sounds too good to be true and one should become suspicious especially when the European Central Bank (ECB) led by a former vice chairman of investment banking institution Goldman Sachs is put in charge with “integrated supervision” of the banks in Europe. It is like having monkeys mind a banana plant and Mr. Draghi doesn’t even try to hide his enthusiasm when lauding the decision to “protect against bank – runs”.

Closer scrutiny reveals that the opposite is true: German finance minister Wolfgang Schäuble excluded less than a month ago that funds from the European Stability Mechanism (ESM) would ever be used for rescuing ailing banks.  But, the new regulation allows, amid many exceptions that can only be called intended loopholes, the buy-out of shareholders and debtors of a bank without forfeiting the core capital of a bank until one day before declared insolvent.

On top of that the resolution fund shall target merely 55 billion Euros in ten years which is more than ridiculous in lieu of the fact that European banks are holding at least one trillion of malicious debts which they try to get off their balance sheets. The question arises what will happen after the next “stress test” undertaken by the EU Commission that will most likely reveal that the 8% minimum capital requirement will not be sufficient?  Who shall come up with the 92% of 4.5 trillion Euros in total required?

Not so long ago it had been proclaimed by the same finance ministers and EU Commissioners Almunia and Rehn that the wisdom of the financial markets shall decide over the interest rates a state should pay for it’s debts and that the member states shall be forced to govern in a manner that justifies the trust of the financial markets in their policy.

For quite some time now one knows about LIBOR interest manipulations, the conspiracy in fraud by a few investment bankers fixing currency exchange rates as well as the prices for gold and silver and ne is also being made aware of the fact that these fraudulent manipulations on a market that shifts every day 5 trillion Dollars benefit four giant banks only that virtually control half of the entire market volume.  On the derivative market it is seven major banking corporations that dominate 90% of the transactions. To believe that interest rates for state obligations are being freely negotiated on a neutral market that acquires and values information and analysis in a sober, wise, manner free from any conflict of interest is naïve.

Since 2008 about 4.5 trillion Euros of taxpayer’s hard earned money is being put into jeopardy for rescuing financial Frankenstein monsters that require ever more transfusions in the arteries of an ailing banking system. Even Germany’s state debts have grown by 360 billion Euros while it has become obvious after yesterday’s meeting of the finance ministers that their promise to let criminal casino-banks either pay for their own losses or shut them down is written on toilet paper.

Article 27 of the new regulation allows for a bunch of exceptions that will bail out shareholders and debtors of a bank until one day before insolvency by taxpayer’s money as long as such bank “provides for a viable business model”.  The question should be asked: why would a bank that has a “viable business model”, a typical terminology of the ‘consultancy industry’, require any state-aid at all?! Truth is that through the backdoor the taxpayer shall once more become the rescuer long before owners and creditors are being held liable.

Mr. Draghi’s former employer Goldman Sachs as well as the US American rating agency Standard & Poor’s whose ‘analysis’ often collides with it’s client’s economic interests and for that reason cannot be seen as neutral, in an internal communication revealed by the Financial Times comes to the conclusion that the “new EU directive allows governments to rescue banks with public funds”.

Truth is that a „banking union“ is as superfluous as “Eurobonds” but that a tough regulation for banks is the task of our times.

And, what would be needed is a counter-cyclical monetary strategy rescuing the real economy and the people standing behind such. While the “banking union” is being debated hundreds of citizens have committed suicide, at least 120 in Greece, while in Spain 45,000 families lost their homes. At the same time more than 10,000 small and medium sized entrepreneurs in the crisis countries lost their battle against the depression caused by banks and speculators.

There is no statistic that reveals how many human beings have died in our European Union because necessary medical aid could not be provided because of the lack of public finances to fund public hospitals in the member states in crisis. And, there is also no figure showing us how many young citizens have given up all hope to lead a normal life in our present economic system being confronted with a record youth-unemployment rate of 60% in Greece, Portugal, Spain and Ireland.  One can only guess how many of the 746,000 pensioners in Germany receiving the social welfare basic subsistence are collecting bottles to make a few Euros in order to sustain themselves although they have worked hard all life, have risen us, their children, and now live in misery because we turn to them and tell them that the pockets of the state are empty.

But, there is painstakingly accurate documentation available on the beneficiaries of the past three months: the wealth of the European multi-millionaires has grown by 100 billion Euros.