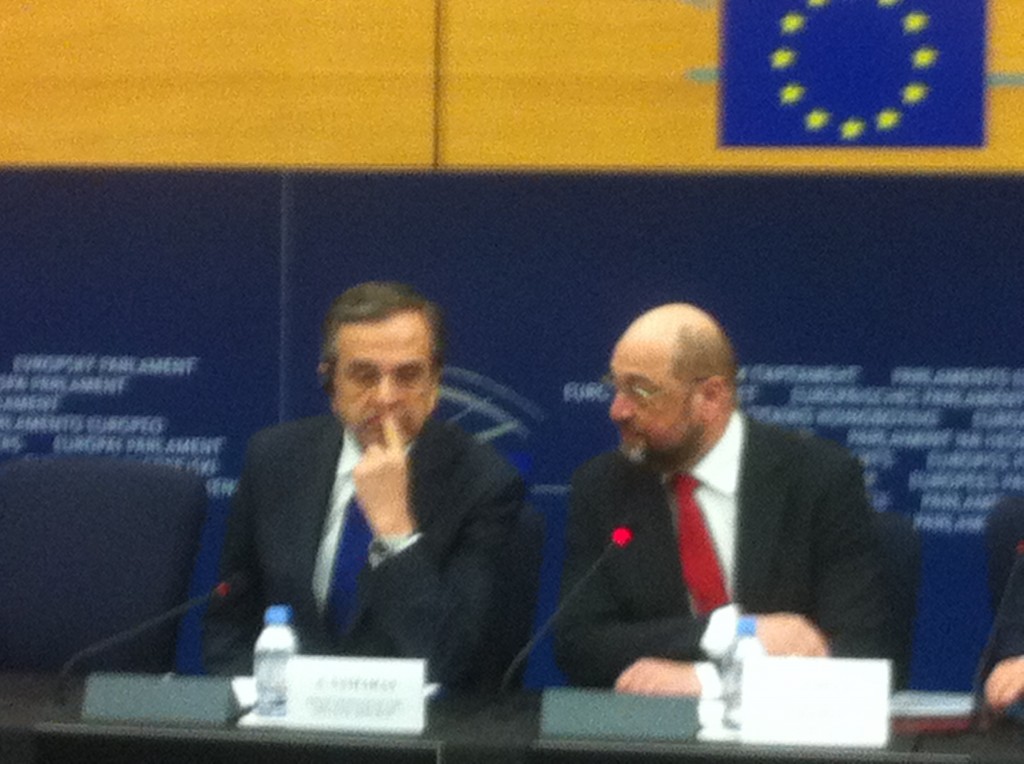 Samaras: no pressure by banks to privatise. Schulz: shadow banks can’t be regulated, only the banks in daylight can.

Greek Prime Minister Samaras reiterated today in a press conference in Strasbourg that his country was not under any pressure from Banks or hedge funds when taking measurements to privatise industries and public services.

This stands in sharp contradiction to the findings of a German TV report “Geld regiert die Welt” broadcast on Monday of this week on ARD, the first German channel. In that report evidence is being presented that a US based hedge fund, Blackrock, was executing its power as one of the major owners of Greek debt obligations to force the government to privatise and sell-off the filet pieces of Greek state holdings.

EU chronicle over the years had reported frequently on the fact that major international banks and investment firms, i.e. Deutsche Bank AG, UBS, HSBC, Nathan Meyer Rothschild, and others had been behind the Greek sovereign debt crisis having speculated with Greek bonds and Credit Default Swaps (CDS) issued on those thus provoking the credit crunch.

Later, EU chronicle was able to prove in several reportings, the Greek government was forced by the Troika to accept “advisors” who had close ties to or where directly sent by those banks and who “advised” the government of Prime Minister Papandreou to pivatise and sell state assets in an attempt to curb the hellenic debt.

And, EP president Martin Schulz, “Socialist” candidate for EU Commission president answered the question regarding the system of shadow banks that in effect, according to said ARD TV coverage, rule the world, that one could only regulate the banks not to create shadow banks.

Watch the press conference of Greek Prime Minister Samaras and EP President Schulz on Euronews and EBS or here:

Planet Earth in 2016: too rich to be poor A Comment by Ralph T. Niemeyer, retired editor-in-chief Let’s skip the 2015-Review. All that could…