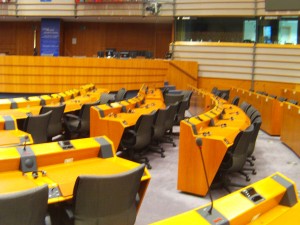 “The new rules address a crucial imbalance in global trade whereby large multinationals from newly-industrialised nations profit from open access to EU markets, but are protected from global competition at home”, said European Parliament rapporteur and International Trade Committee coordinator Daniel Caspary (EPP, DE).  “The new rule is simple: ‘same rights for both sides’. We are creating a level playing field”, he added.

The proposed instrument would  apply to big public tenders (worth €5 million or more excluding VAT) and to tenders in which goods or services originating outside the EU exceed 50% of the total value of the goods or services involved.

MEPs amended the proposed rules to prevent fragmentation of the single public procurement market, by clarifying that Member States or their contracting authorities can restrict the access of third country goods and services only by measures provided for in this Regulation or by relevant European Union law and only after a European Commission investigation has found a ”lack of substantial reciprocity” by the third country concerned.

To reduce the risk that developing countries could become unintended victims of the new  instrument, the committee backed  the proposed exclusion of Least-Developed Countries from scope of legislation and also proposed  excluding those developing countries which are ”considered to be vulnerable due to lack of diversification and insufficient integration within the international trading system”. Their bids for public contracts in the EU public tenders must be treated as intra-EU ones, said MEPs.

MEPs amended the draft to ensure that “lack of substantial reciprocity” restrictions could also be imposed where international labour standards, as defined by the recently-approved EU Public Procurement Directive, are breached in a third country.

The committee vote needs to be confirmed by the full House in a plenary vote in January 2014.