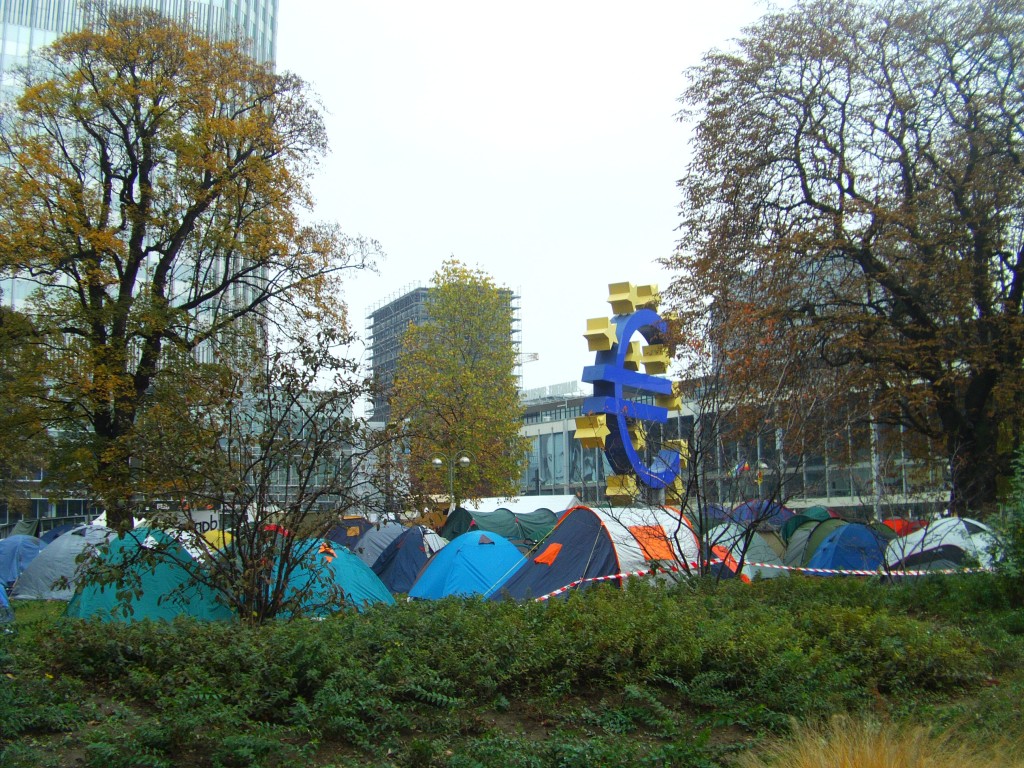 Will “Occupy Deutsche Bank” celebrate an even bigger comeback?!

During the crisis, Deutsche Bank AG has once again reported yet another record pre-tax profit of €5.4 billion.

Deutsche Bank AG has made the majority of this with its investment banking division, which is known for its ruthless speculation and gambling with Greek bonds and Credit Default Swaps that it exchanged with Goldman Sachs, the former vice president of which, Mario Draghi, now chairs the European Central Bank (ECB).

Together with the so-called troika the German government, along with Germany’s mainstream media promote a kind of racist, apartheid-like image of lazy, corrupt, southern Europeans who  have accumulated enormous debts. This is not true. It’s an inside job by Deutsche Bank AG and its partners-in-crime.

Deutsche Bank AG, however, is eager to maintain the image of being the market leader that did not rely on taxpayers like other German banks such as Dresdner Bank AG or Commerzbank AG.

But the opposite is true, in fact. Deutsche Bank AG had indirectly received state aid when urging Chancellor Angela Merkel in September 2008 to rescue troubled Hypo Real Estate (HRE), in which Deutsche held shares through Italian UniCredit.

Had Merkel not taken the call from Deutsche Bank AG CEO Josef Ackermann on 14 September 2008, HRE most definitely would have sunk and with it some €20bn that was at stake for Deutsche Bank AG.

The German government was quick to cite the rescue mission as being “an exception” that was only being made because of “systemic importance” for the entire financial world. And Chancellor Merkel made clear that “never shall a bank be that big that it can blackmail a state”.

But Merkel’s government also covered Deutsche Bank AG’s losses to the tune of the €10bn that it would have made if the publicly owned Industriebank (IKB) that was deliberately ruined by a short-selling orchestrated by Deutsche Bank AG had not been rescued.

In total, Deutsche Bank AG benefited from government bail-outs of €30bn. That is the exact amount Deutsche holds as core capital in its basement’s treasures, meaning that without the help of German taxpayers, Deutsche Bank AG would have gone bankrupt.

But instead of being humble and grateful, Deutsche Bank AG not only continued to spin an ever bigger wheel of fortune with Greek bonds, leading to an accumulation of an additional €20bn of debts with Athens being ‘rescued’ by the troika, it also swallowed Bankhaus Oppenheim, a traditional wealthy-class gambling institution, as well as the formerly public German Postbank, making Deutsche Bank AG really become of “systemic relevance” as the next crash will inevitably put real people’s deposits at risk.

Merkel, obviously having had a gun point at her head when allowing this to happen, also let Deutsche Bank AG off the hook when accepting that the institution that technically should be owned by the government, only contribute a laughable €124 million, to be paid into the government funds to prevent future crises.

In relation to the total funds allocated for rescuing the financial casino in the Eurozone, this would mean that the next crisis can only happen in around 120 years.

The time would appear ripe to confiscate the entire €5.4bn profit that Deutsche Bank AG  has made from taxpayers’ money and, instead of burning German flags in Greece, burn one of this corrupt institution’s.

And, in order to ensure that no further bailouts become necessary, the entire financial system needs to be brought under the control of governments and strictly regulated, the casino shut down for good and all speculative transactions be banned. Nothing less will do, and citizens have a right to demand exactly that, as taxpayers’ funds are in dire jeopardy.

over 10,000 democrats on the streets in Berlin by Ralph T. Niemeyer  During the past weeks a growing number of leftist democrats gathered in…