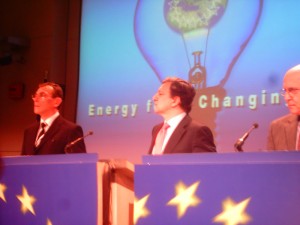 The European Parliament has proposed that exploration and hydraulic fracturing extraction activities for non-conventional hydrocarbons should be subject to environmental impact studies, in adopting an amendment to existing EU legislation on Wednesday. MEPs also suggest measures to prevent conflicts of interest and to ensure that the public is informed and consulted.

“We are revising this key legislation to align it with Europe’s new priorities, such as soils, resource use and protecting biodiversity. Hydraulic fracturing raises concerns. We lay down clear criteria to avoid conflicts of interest and involve the public”, said lead MEP Andrea Zanoni (ALDE, IT). Mr Zanoni was granted a mandate, by 332 votes to 311 with 14 abstentions, to negotiate a first-reading agreement with EU ministers.

The Environmental Impact Assessment (EIA) Directive applies to both public and private projects. It sets out certain criteria, including the information that must be submitted to national authorities for a project to be assessed for approval. The legislation covers a broad range of projects, ranging from bridges to intensive pig farms.

Current legislation covers natural gas projects that extract at least 500,000 cubic metres each day. Many shale gas projects yield less, due to the rock fracturing process, and hence are not subject to an impact assessment requirement. MEPs want this requirement to be mandatory, whatever the quantity extracted, for all exploration and exploitation of non-conventional hydrocarbons (shale gas and oil, coal gas, etc.), including shale gas projects, for the phase in which the hydraulic fracturing technique is used.

The proposal includes measures aiming to prevent conflicts of interest between developers and people carrying out studies. MEPs’ amendments seek to ensure that experts have the necessary qualifications, experience and technical skills. They must be able to work in a scientifically objective fashion, independently of the developer or the public authorities themselves, says the text.

MEPs also propose measures to ensure that the public is informed and consulted.

Let’s revive the block-free state’s movement . It can’t be any minute too soon.   by Ralph T. Niemeyer Human Dignity dies when a…